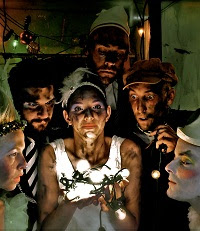 Glorious ghosts recreate and recount the 1903 production of Bluebeard, the Holiday Panto, at the brand new, "fireproof" Iroquois Theatre, where over 600 lives were lost (primarily women and children) in the deadliest theatre fire in history.

To this day, The Iroquoise Theatre inferno still stands as the deadliest single-building fire in U.S. history.

Highly recommended!  We caught this sold out show December 16th and were completely blown away.  Advanced tickets strongly encouraged.  Here's a bit of our prior coverage.  This dark comedy was a multilayered gift where the best intentions go horribly awry and a proudly, loudly proclaimed fireproof theatre erupts in flames.   The 1903 Iroquois Theatre fire still stands as the worst single building fire disaster in history.

We've posted about the show on December 10th & 17th, but we'll say it again.   If you haven't had a chance to see Burning Bluebeard yet, go!   What are you waiting for?!   This is one of the most compelling, excellent, multilayered productions currently running.   And time is running out.   They close December 30th--the actual anniversary of the fire.

My kids (8 & 10) were enthralled, especially since their circus clowning teacher played Bluebeard, and his real life wife played his wife.  The kids were familiar with her work in 500 Clown-Trapped.  As always, if your kids are sensitive or you prefer not to expose them to intense subject matter, then parents are cautioned to see it first or at least read up on the production in advance, before you make the call on bringing the littles.   Kids are welcome, but the theme is intense, and more appropriate for tweens and up.   The disaster is tastefully handled, with lots of humor, physical comedy and poetic revery.  And we loved the juxtaposition of the past with nods to our generation's disasters, like the haunting version of Nirvana's "Smells Like Teen Spirit" that opens the show and the quirky lip sinc to Amy Winehouse's Rehab song.

We found it tragically amusing that the theatre made a huge deal about being fireproof--even printing it in all their playbills.   With the wisdom of a child, my 8 year old said "It's like the unsinkable Titanic.   If ads make a big deal out of saying a place is fire proof or a ship is sink proof....don't go there.   It's just tempting fate."

Without too many spoilers, the whole fire only lasted about 15 minutes, but more people were trampled trying to get out, than actually died of fire or smoke inhalation.   And loads of life saving fire reforms happened as a result, like doors with "panic bars" that open outward when pressed against.

Like great written tragedies, the fire had it's dramatic elements and good intentions that turned out to be bad choices.   One of the famous actors from vaudeville days assured everyone things were under control and urged them to stay in their seats.   Another actor broke the lock on the fateful backstage doors, thinking it the humanitarian thing to do to make an escape possible for all the actors trying desperately to exit the blazing, smoke filled inferno.   When the giant, bay doors finally crashed open, the actors fled to freedom in the cold, December air, but the inadvertent backdraft caused a giant fireball to incinerate the balcony!

One of our unanimously, favorite parts of Burning Bluebeard was the "fire escape plan rap" that reminded all of us of the fabulous Phineas and Ferb "Platypus Controlling Me" song embedded here.
We're trying to get a copy of the fire escape version.   It details in hilarious detail, the actual way to exit TMLMTBGB's Neo-Futurariam space in case of an emergency.   I just about peed my pants, I was laughing so hard, when they performed it.   So creative!    The kids have been singing it ever since.

Now, if you're familiar with our reviews, you know we do review a lot of theatre appropriate for adults and older children, in addition to unquestionably family friendly productions.   Instead of a straight up age guide of G, PG, PG13 rating, I believe parents know their kids and what they can handle when it comes to theatre.  There are 8 year olds out there who would love this show and tweens who would be traumatized and have nightmares.   It depends on the temperament and maturity of your child and on what you as a parent are comfortable talking about and introducing.

We'll tell you if a show like Opus at Redtwist and Penelope at Steppenwolf is recommended as a parents' night out or much older kid appropriate, so you get a sitter for the way under agers.   But, Burning Bluebeard is one of those grey area shows.  The artistic merit is unquestionable, and older teens and adults will love it.  But the subject matter is macabre and the fire scene is intense, though handled respectfully.  We happen to love quirky, dark humor, so our kids are unfazed by it, and there is plenty of clowning and amusing staging and songs to counterbalance the grimmer bits.
We do take our middle school kids to well done productions with potentially intense themes, because we know our own kids and know what they can understand and handle.   We prepped our kids with a history lesson, background of the show, checked out all the on line info, and made our choice to take the kids, since they knew two of the main characters.   if you're considering bringing middle schoolers, we recommend you do your homework, consider what your kids are mature enough to handle, prep them about the show beforehand, and talk with them after.
Our kids enjoyed the production and were curious and full of questions and comments afterward.  The shared theatre experience was truly a gift for our family, sparking loads of creative tangents.  Their presence was one of the best presents.  Speaking of presents...one of the kids' favorite elements from the show was the use of actual wrapped gift boxes that got opened in sequence, as a device to move the story along--truly presents from the past to the present.

I've been haunted myself by the concept of words and acts embedded in the space....seeping into the floorboards...and living on with an echoing history of their own.   I truly believe places do take on the aura and flavor of their history.   It's undeniably true and such a cool concept.

The gorgeous, Ornate Oriental Theatre rose from the ashes of the Iroquois, but the fateful, backstage, backdraft door still exists.  And so do the tales and lives of those lost and forever altered by this history, as long as someone resurrects their stories and keeps them alive in the minds and imaginations of a new generation.

CAST
Anthony Courser- Bluebeard (He has enriched our lives weekly for a year, teaching our kids clowning at CircEsteem!   He can also be seen in Barrel of Monkeys' long running show, That's Weird Grandma--also highly recommend!)
Leah Rose Urzendowski (Anthony's real life wife, and Bluebeard's only wife to keep her head.   We thoroughly enjoyed her performance in Burning Bluebeard and with our friends in 500 Clown Trapped at Adventure Stage!   Check out ChiIL Mama's Trapped review HERE.)

created by Jay Torrence
directed by Halena Kays  Tickets are $20, $10 for students/seniors with ID, or pay-what-you-can on Thursdays.  Purchase tickets online.

"One of the quiet beauties of Chicago’s theater season..." - Lawrence B. Johnson

Celebrate Christmas with a tragic holiday tale turned hauntingly beautiful homage to life, inspired by the true story of the Iroquois Theatre fire of 1903.   Singed clown performers recount the horrific event where 600 lives were lost as the new Chicago loop theatre caught fire during a matinee performance of Mr. Bluebeard, a Christmas pantomime. Personal stories and touching remembrance are met with silliness, gift giving and dance as the performers seek to end their nightmare through a successful completion of their show. Day by day, show by show, these hopeful performers recreate the fateful night, joyfully embracing the impossible task of changing the inevitable. Sadly, each night, their efforts end in fiery death. How hard will you fight for your happy ending?

"Recommended - a Must See Show" - CenterStageChicago.com

Creator, Jay Torrence, states, "History doesn't blame the performers for the accident. Courts have never convicted them. Burning Bluebeard explores how the performers face the guilt of having caused this tragedy, just through their presence on the stage and their inability to save their audience. This is the story of an apology from a group of artists to their audience for causing horrific grief in an attempt at making something beautiful.”