Poi Dog Pondering, Brandi Carlile & Zach Heckendorf all appeared as part of XRT's series of Concerts for the Kids, at Metro and Park West last weekend.  For over two decades, the radio station has sponsored an annual holiday concert series to collect toys and raise money for local children’s hospitals including Children’s Memorial Hospital, University of Chicago Children’s Hospital and Central DuPage Hospital. Over two tons of toys and hundreds of thousands of dollars have been raised since 1985.

At the shows, 93XRT staff are on hand to collect donations from concertgoers – attendees are encouraged to bring a new book or toy to the show, which will be delivered to Chicago area children hospitalized during the holiday season.   More Concerts for Kids shows are coming up, including Wilco, The National & Ryan Adams, so check 'em out here and rock out for a good cause. 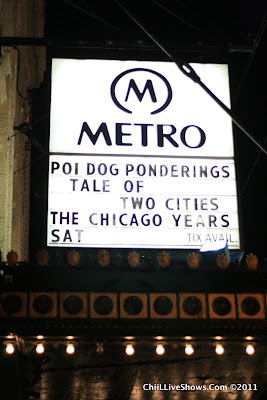 Check out XRT's link for band videos, photos, etc. or check out Poi Dog's home page for upcoming show dates, merch and more.    Unfortunately, I wasn't able to get off any good shots this time (except the marquee), as there's no formal photo pit, and I was covering Kyuss and The Sword over at The Vic first.
I do hope they end up releasing both shows on DVD and that we'll have a chance to review them and run a give away at that time.   I connected with what Frank wrote about these shows on their main page and will repeat it here:
I find it nearly impossible to fully articulate how important PDP is in my life and what this series of upcoming shows mean to me. PDP has been one of the the most important focuses in my life; a constant, an adventure, a vehical for expression of music, poetry, thought and art (& my contribution to PDP constitutes the bulk of my life's work to this point) & more importantly; it has been the catalyst that has brought me together with a myriad of wonderful strong creative musicians, visual artists and brilliant forward thinkers, and it has taken us all on some amazing adventures all across the American map & internationally from Japan to BudPest.
It has been the anvil that we, as a collective, have forged bonds of friendship through artistic collaboration. In a way these shows are an attempt to honor that, and at the same time honor the 2 cities that gave the band inspiring / nurturing homes during two important era's of the band's life: Austin and Chicago.
(The VERY important city, and line up missing representation from this retrospective is PDP's original home; Honolulu and the original Hawaii line up of 86 to 87, I wish I was able to get the Hawaii line up together for this series of shows, but 1 member lives in Berlin, another in Paris and a few more in L.A. & Hawaii, and it was just out of our financial reach to bring them in for this).
But it was the Austin line up and the Chicago line up that did all the recording of the records, and each has a distinctive sound, and I just felt it would be a beautiful thing come all together for a week end to give the fans of the band something special, and for us to have the chance to play together again and honor the experience we shared making this music.
The reason for these shows now is that it just feels like the right time to document the arc of PDP; It's the 25th year anniversary of the band, and I wanted to capture it on an audio recording and on film, in it's mature prime.   I plan on playing in PDP till I kick the bucket. It is just what I do.  The band is going strong as ever, but I am certainly aware that the forces of life, creative interests, family commitments, financial forces may enventually make it more & more difficult for us to all come together to do this.
I look around on stage and I can't believe how lucky I am to be playing with the people I have had the chance to meet and play with now, and since the begining, and everyone is busy with their lives, families, other musical projects, careers... and yet, somehow, everyone finds the way, and time, to come together and record records, and perform live. They do it out of love for the experience we have forged together. Nobody does this for money (we all do something else for that).
We try to make good, honest recordings and conceive and execute a few good quality concerts; at this point in our arc it is important for me, and everyone in the band, to maintain & protect the integrity the band has built over the 25 years.
Love,
Frank
Here's a little taste of the 12/2 show via smartphone from TikiRick66
We'll be on the lookout and eagerly anticipating those pro recordings.
Here's the set list from the first night from setlist.fm 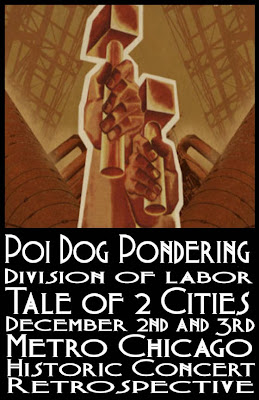 Zach Heckendorf
It's been an eventful weekend, musically.   Something old...something new, with Poi Dog Pondering celebrating 25 years and Zach Heckendorf just beginning.   We heard something acoustic, stripped down and achingly beautiful and something heavy and amazing that filled a void of 16 years and captivated the audience.   Kyuss Lives! rocked The Vic after a major hiatus, and across town at the same time-different SPACE, Brandi Carlile filled the stage with sound and sold out 2 shows on the simple power of an acoustic guitar and a killer voice.

We were again invited to a sweet private showcase at Chicago's Comma Music, where newcomer Zach Heckendorf impressed us with his skillful, heartfelt guitar playing and youthful enthusiasm.    Who the dorf is Heckendorf?   One heck of a good guitar player!   This Denver native is certainly one to watch.    He had the chance to open for Brandi Carlile who was in town to play 2 sold out Chicago Shows (Park West & SPACE), and has signed with her label.    Hard to believe he's just 18.

We had a great chat with Zach about Denver and Red Rocks and the music scene out there.   We'll also be giving away his 11 track CD, The Cool Down, as part of our Ginormous Holidaze Gift Guide & Give Away.   One lucky reader will take home 6 CDs including:

Enter here for your chance to win this and a zillion other great give aways for everyone on your nice (and naughty) lists.    We have New York Dolls & X, brand new releases on DVD.   We have toys, games, kindie CDs, DS games, books, and more.   Check in with ChiIL Mama like we vote in Chi, IL...early and often.    We'll add new give aways & reviews DAILY through the 14th!


We had the great pleasure of checking out Brandi Carlile's sound check and private show.    She's on her first solo tour right now, and holding her own with the big boys.   The solo-acoustic set up showcases her voice without any distractions.   She told the small crowd that she was breaking out songs she hasn't gotten to play much on this tour like the super sweet, unreleased "Keep Your Heart Young".    We spoke with her a bit after the show and her southern twang is as unpretentious and genuine as her songwriting.   She has a powerful, voice and a girl next door attitude that's refreshingly natural.   It was a hoot to hear about her adventures and the characters she met at The Grand Ole Opry like Wanda Jackson and Little Jimmie Dickens.
Carlile first performed "Tennessee Flat Top Box" with her mother at age 8 and by 15 she was singing,learning guitar in earnest, and writing her own songs.   By sixteen, she was playing back up for an Elvis impersonator.   Diagnosed with ADD, school was a challenge and she eventually dropped out, but music has kept her focus.   Her big break came when Dave Matthews caught her act at Sasquatch!  Music Fest in 2003, and she's been touring and putting out amazing material ever since.

Carlile identified herself as a lesbian, publicly in a 2002 newspaper interview with The Western Front, the official newspaper of Western Washington University.   She was quoted as saying: "I think that since it's not a big deal for me, that people subscribe to that."

In a later interview with the Los Angeles Times, October 17, 2009, Carlile stated "I don't have to have a lot of formality around it, the reason why I don't have to wear it on my sleeve and make a spectacle of it, is because there were people before me who paved the way so I wouldn't have to."

Her latest release is Live at Benaroya Hall With the Seattle Symphony which came out in 2011.    It's interesting that in the same year, she went from recording with an entire symphony orchestra to taking her first solo-acoustic show on the road, sans any band at all, for the first time.   She's a study in contrasts, but that girl can sing!   Check out a review of her Park West Show here, from blog, Chicago Music Seen.