Here are some of our fun shots from Trapped.   Of course, we're a bit limited as we can only shoot the post show-Q & A and ice cream after party and not the actual show, but the 500 Clown trio are still pretty colorful characters-even in relax mode.


We had the great pleasure to check out Trapped at Adventure Stage, 500 Clown's first ever show for kids.   It was a galumphing, cavorting, improvisational implosion of fun.   We even got in on a free ice cream after party, a regular occurrence at Adventure Stage that had my son resembling a Blue Tongued Skink.


What...Did my use of galumphing have you groping for Google?   It's really the most appropriate word that came exploding into my brain during Trapped.    Back in my college theatre days, Free Play: Improvisation in Life and Art by Stephen Nachmanovitch was (and still is) one of my favorite books.    Here's his take on the word:


Anthropologists have found “galumphing” to be one of the prime talents that characterize higher life forms. Galumphing is the immaculate rambunctiousness and seemingly inexhaustible play-energy apparent in puppies, kittens, children, baby baboons – and also in young communities and civilizations. Galumphing is the seemingly useless elaboration and ornamentation of activity. It is profligate, excessive, exaggerated, and uneconomical.


We galumph when we hop instead of walk, when we take the scenic route instead of the efficient one, when we play a game whose rules demand a limitation of our powers, when we are interested in means rather than in ends. We voluntarily create obstacles in our path and then enjoy overcoming them. In the higher animals and in people, it is of supreme evolutionary value. 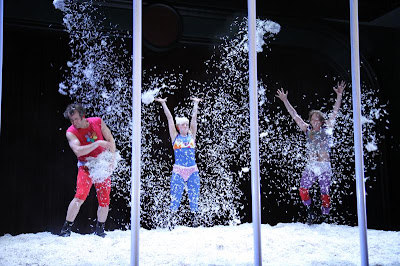 photo by Johnny Knight
Oh yes. THIS is what the trio, known as 500 Clown, does so well in Trapped.   I've seen plenty of adults doing children's theatre over the years, who try to play like children, with varying degrees of success.   500 Clown nailed it, wrapped it in caution tape, and took it to a whole new level. 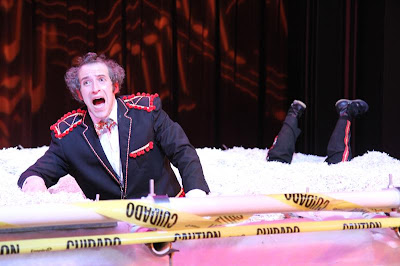 photo by Johnny Knight
Could it be because mastermind, maestro clown, Adrian (AKA:  Bruce), is also the father of two young sons and has a front row seat to authentic child's play on a daily basis?
I thoroughly enjoyed Trapped, as I've been a sucker for improv since I discovered Chicagoan Viola Spolin's improv games in a high school class.    Back in the late 80's I even founded an improv troupe at Miami University that's still going strong 24 years later.   And it's this grand tradition that 500 Clown continues-bringing acting games, obstacles and challenges to the stage as performance instead of just practice.   That's really what Trapped is at the core...one big improv game.    Find your YES, indeed.   It's also a whole (or is that HOLE?) lot of fun.


I've been a fan of 500 Clown's adult pieces like 500 Clown Frankenstein and 500 Clown Macbeth for years, and we did see some of the cast in Chicago Children's Theatre's Go Dog Go, a few years back as well.   In fact, if there was any minor disappointment with Trapped, it's that there wasn't more of the gasp inducing scaffolding work and multi level gymnastic feats, we've come to love and expect.    I'd love to see Trapped remounted within a life sized game of Mousetrap.


That said, the family did enjoy the production.   500 Clown expertly pulls the audience in and breaks down the 3rd wall by literally climbing up and over the audience, scaling the seating like a mountain.   They grab our attention early with a madcap parade full of booming drums and wacky costumes, and they don't let go.   Then they involve everyone in their multilevel mental and physical escape escapades. 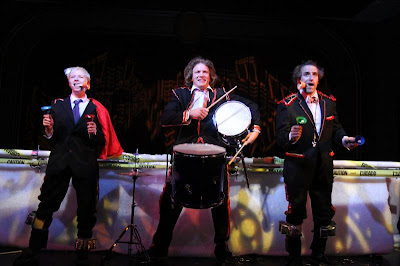 Be sure to stay for the Q & A-one of the coolest ongoing features of all Adventure Stage productions.    You can find out how old the characters were when each began acting, ask burning questions about the show, or offer your own creative suggestions.


We all hope this is just the first of many more family friendly 500 Clown pieces to come.   Trapped is highly recommended.   Catch 'em before they escape.


500 Clown and Adventure Stage Chicago proudly present the world premiere of 500 CLOWN TRAPPED, conceived by 500 Clown Producing Artistic Director Adrian Danzig and directed by Paola Coletto.
Experience 500 Clown's signature mix of daring physicality, tricky sets, raw emotion and powerful storytelling! Starting the show in the guise of musicians, three clowns explore what it truly means to be trapped...and to be set free. Who sets these traps? Who benefits from them? Are they even real? Using slapstick mishaps, vaudevillian turns and untiring resilience, the clowns struggle to move beyond their own limitations as they search for the answers they need. Recommended for all ages.
Adrian Danzig was driven to create 500 CLOWN TRAPPED because 500 Clown has been asked for a decade if it does children's shows, and the answer has always been a resounding NO. But at a certain point, the 500 Clown members began to ask themselves...why not? Why not create a show specifically aimed at breaking the boundaries of age-based theater? (Why not humbly and excitedly stand atop the awesome shoulders of Looney Tunes, Chaplin and Keaton?) These questions, combined with a deep inquiry into the roots of traditional red-nose clown, are the foundation for this new work.
The partnership between 500 Clown and Adventure Stage Chicago sprang from a mutual affinity between two men as people, parents and artists. Mr. Danzig and Adventure Stage Producing Artistic Director Tom Arvetis first met as fathers in a cooperative child care center, so creative parenting and playful learning are at the heart of their relationship. The huge knowledge and high level of integrity that Adventure Stage has about shows for younger audiences provided 500 Clown a perfect opportunity for collaboration and experimentation.
In addition to writing 500 CLOWN TRAPPED, Adrian Danzig also serves as the show’s scenic designer and appears as a performer alongside Timothy Heck and Leah Urzendowski. Stage management is provided by Clare Roche, with lighting design by Lee Keenan and costume design by Erin Cook. The show is directed by Paola Coletto.
500 CLOWN TRAPPED was commissioned by The College of Saint Benedict/Saint John’s University and is partly supported by The Boeing Company and an Access to Artistic Excellence grant from the National Endowment of the Arts (NEA). This is Adventure Stage’s fourth NEA grant in the last seven years.

*Show Guide
Adventure Stage's Education Department produces a Learning Guide for all of their productions. This guide includes fun background information about the show, pre-show and post-show discussion questions, as well as art and language activities. While they primarily make it for educators, they think parents should check it out as well. Click here to join the fun! 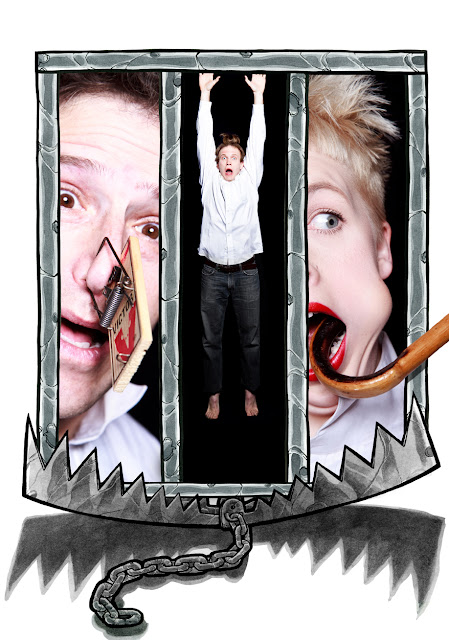