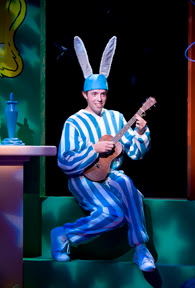 Today is the final day of exciting giveaways celebrating the extension of Goodnight Moon: The Musical at the Victory Gardens Biograph Theater, now running an extra week through Dec. 31, with plenty of weekday matinees for kids and families looking for something fun to do together next week.

Post "DAY FIVE, GRAND PRIZE" by midnight tonight on Chicago Children's Theatre's Facebook page, or tweet/retweet @chichildrenstheatre for a chance to win the following grand prize package:
4 tickets to our Goodnight Moon New Years Eve Celebration at 11am, Sat, 12/31, which of course culminates with a "midnight countdown" and sparkling cider toast at noon.

4 tickets to CCT's next premiere, The Houdini Box

Chicago Children's Theatre will contact the winner tomorrow morning.
The Houdini Box is coming!   It's CCT's world premiere stage adaptation of the first book by Brian Selznick, author of The Adventure of Hugo Cabret, a.k.a. Martin Scorcese's Golden Globe-nominated best picture Hugo.  Performances are Jan. 24-Mar.4, 2012 at Chicago's Mercury Theater, and Mar. 14-25 at the North Shore Center for the Performing Arts in Skokie.
Posted by Bonnie Kenaz-Mara at 5:06 PM

Email ThisBlogThis!Share to TwitterShare to FacebookShare to Pinterest
Labels: Goodnight Moon the Musical