ChiIL Mama was elated to be invited to Joffrey's final dress rehearsal for The Nutcracker.  I shot the footage above during the final, afternoon run through before opening night. 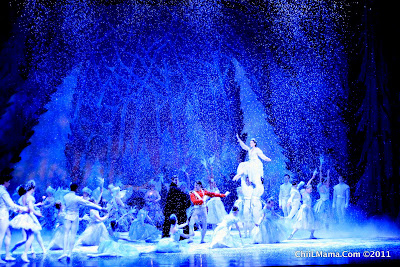 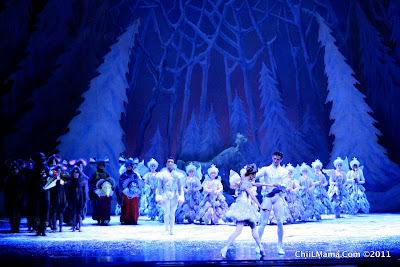 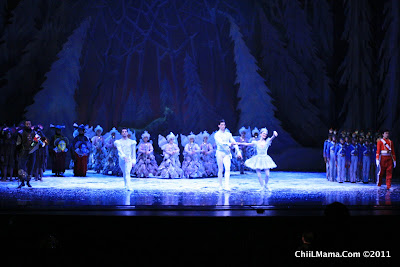 Then we were lucky to catch a number of local Chi-Town ballerinas for a group interview below.  These talented kids have all been taking ballet since their toddler days and have put in numerous hours of practice and dedication to rise through the ranks to become mice and party guest in the #1 Nutcracker in the nation!   Check out their wise advice to other aspiring dancers, the ways they combat stage fright and more.

That evening we went back and saw the show.   We were absolutely enamored after seeing the opening night of Joffrey Ballet's Nutcracker.  It was Sage's first time to see a full, professional production of The Nutcracker, and Joffrey's was a wonder to behold.  The show absolutely earns the title of #1 Nutcracker in the nation.  Everything from the orchestra to the set design, costumes, and dancing was exquisite. 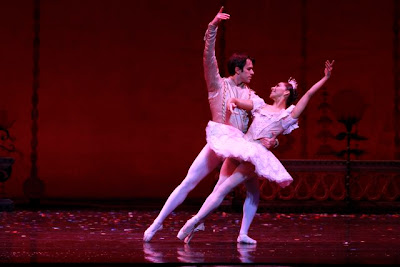 There was some buzz in the audience that the large cast made the stage a bit cluttered and the main action got a bit lost in the melee, and there's some truth to that.   I thought it was a fair trade off for the benefit of having 118 kids involved and inspired.  It was stunning to see so much color and action and so many kids in well choreographed chaos.
The children in the audience certainly connected and engaged with the story more, with the excess of children involved.  And it's such a stellar opportunity for the cast kids to have the chance to work so closely with pros.  It's also a brilliant move on Joffrey's part, as all those choir kids and all those tiny dancers have family and friends eager to come see their own little shining stars.  Two casts rotate nights.

Yumelia Garcia was particularly stunning and accomplished as the Sugar Plum Fairy.  We also thoroughly enjoyed the darkly delightful portrayal of magical puppet master, Dr. Drosselmeyer, by Matthew Adamczyk.   Of course, all the tasty treats from around the world, 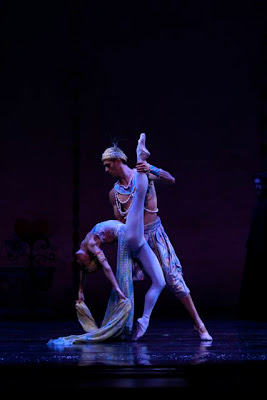 the mice, the party children, the Snow Queen, King, and their snow consorts, Clara and the guests were all entertaining and amazing. 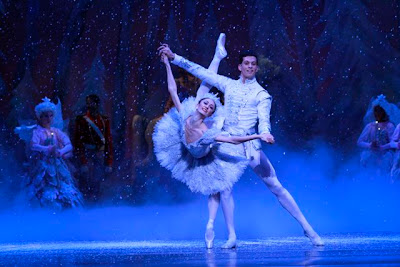 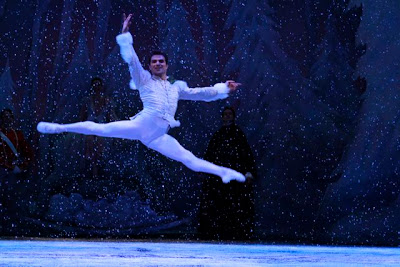 It was purely magical to see it snow on stage on the first real day of snow we've had this winter.   And the giant, steaming tea pot and massive Mother Ginger and her Polichinelles were a delight. 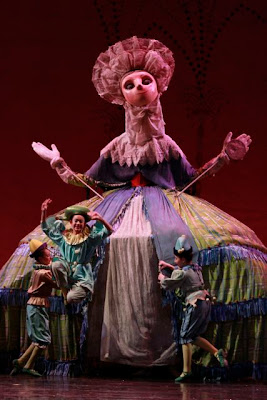 Here's the scoop on the show details: 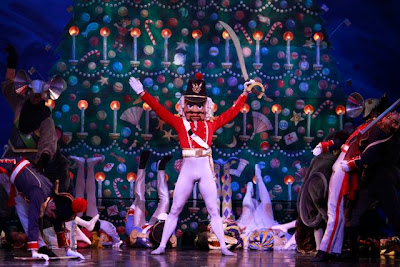 The world renowned Joffrey Ballet once again transforms the Auditorium Theatre into a winter wonderland full of magical toys and waltzing snowflakes during the annual production of Robert Joffrey’s The Nutcracker.  One of Chicago’s favorite holiday traditions, Robert Joffrey’s The Nutcracker has been delighting audiences both young and old since its first Chicago performance in 1996.  The Nutcracker is presented in 20 performances at the Auditorium Theatre of Roosevelt University, 50 E. Congress Parkway, December 9 – 27, 2011.
The curtains rose on The Joffrey Ballet’s The Nutcracker on December 10, 1987 at the Hancher Auditorium at the University of Iowa, with the production then embarking on a national tour.  Since then, The Joffrey Ballet has maintained the most Nutcracker tour dates of any major ballet company in the country, easily making it America’s #1 Nutcracker.  The year marks the launch of the 25th anniversary of Robert Joffrey’s The Nutcracker, culminating in 2012 with an official Silver Anniversary celebration.
When Robert Joffrey choreographed The Nutcracker with the help of his Co-Founder Gerald Arpino, he replaced the traditional European setting common in other Nutcracker productions with a 19th century American home, populating it with toys from his own childhood.  From there, familiar characters Clara and the mysterious Dr. Drosselmeyer embark on an adventure where toy soldiers battle legions of mice, the Snow King and Queen whisk them away to an enchanted forest, and the beautiful Sugar Plum Fairy delights them with an array of exotic confections.  The Joffrey Nutcracker maintains the classical purity of Robert Joffrey’s and Gerald Arpino’s original choreography while sparkling with elegant costumes, an extravagant set by Oliver Smith and a giant Mother Ginger puppet by Kermit Love.
The full Joffrey company is joined onstage by 118 young dancers from Chicago and beyond, dancing in the opening Party Scene and later as Mounted Mice, Toy Soldiers, Dolls, Snow Tree Angels and with Mother Ginger as Polichinelles.  This year saw a surge in interest from the Chicagoland community, as attendance at the Nutcracker children’s cast auditions, held September 18, rose by a double-digit percentage from last year.  In addition to the young dancers, young vocalists from five different local children’s choirs will perform the choral parts from the magical Snow Scene throughout the run of The Nutcracker.  They include the Barrington Children’s Choir, the British School of Chicago Choir, the Lake Bluff Middle School Choir, the Pro Musica Youth Chorus and the Providence-St. Mel School Choir.  The choirs will also delight audiences with popular seasonal selections in the Auditorium Theatre's main lobby one half-hour prior to curtain and during intermissions at every performance.  The Chicago Sinfonietta provides live accompaniment of the classic score by Pyotr Illyich Tchaikovsky for every performance.
Performance Schedule and Pricing for The Nutcracker:
The 2011 performance schedule for The Nutcracker at the Auditorium Theatre is as follows:  Friday, Dec. 9, 7:00 pm; Saturday, Dec. 10, 2:00 pm and 7:00 pm; Sunday, Dec. 11, 2:00 pm; Thursday, Dec. 15, 7:00 pm; Friday, Dec. 16, 7:00 pm; Saturday, Dec. 17, 2:00 pm and 7:00 pm; Sunday, Dec. 18, 2:00 pm and 7:00 pm; Tuesday, Dec. 20, 7:00 pm; Wednesday, Dec. 21, 2:00 pm and 7:00 pm; Thursday, Dec. 22, 2:00 pm and 7:00 pm; Friday, Dec. 23, 2:00 pm and 7:00 pm; Saturday, Dec. 24, 2:00 pm; Monday, Dec. 26, 2:00 pm; and Wednesday, Dec. 27, 2:00 pm
Single tickets, priced between $30 and $115, are available for purchase at The Joffrey Ballet’s official Box Office located in the lobby of Joffrey Tower, 10 E. Randolph Street, as well as the Auditorium Theatre of Roosevelt University box office, all Ticketmaster Ticket Centers, by telephone at (800) 982-2787 or online at www.ticketmaster.com. 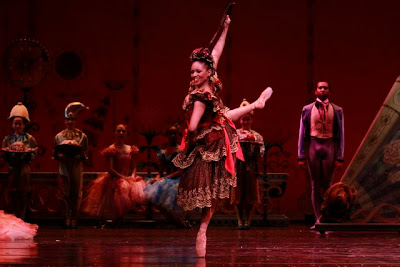 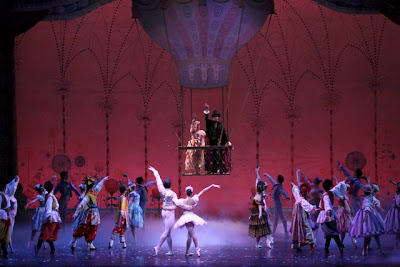 The New Generation Season Continues:
For its winter engagement, The Joffrey Ballet presents “On the Threshold,” a mixed repertory program of three groundbreaking pieces by contemporary choreographers William Forsythe, Wayne McGregor and Christopher Wheeldon.  “On the Threshold” opens with Forsythe’s In the Middle, Somewhat Elevated, a Company Premiere for the Joffrey, originally created for the Paris Opera Ballet in 1987.  With music by Thom Willems in collaboration with Leslie Stuck, In the Middle, Somewhat Elevated is a purely abstract work that combines classical ballet lines with fresh, rapid-fire virtuosity and an air of cool detachment.
The program continues with the return of Wheeldon’s After the Rain, a 2010 Company Premiere for the Joffrey that received unanimous critical acclaim, set to the minimalist, classical music of Arvo Pärt.  The winter engagement is completed by the U.S. Premiere of McGregor’s sumptuous work Infra, premiered by the Royal Ballet of London in 2008.  The Joffrey is the first company other than the Royal to perform this work.  Infra is set to an original score by Max Richter, a mix of mournful strings and calmly indifferent industrial sounds.  The set includes a 59-foot LED screen suspended above the stage displaying walking pedestrian animations by British artist Julian Opie.  Beneath it (“infra,” Latin meaning “below”), 12 dancers execute McGregor’s quick, intricate and hyper-articulate movement, displaying both the dancers’ strength and impressive flexibility.  Made just after the London Tube bombings of ’08, the work simmers with a vibrant emotional undercurrent, conjuring a poignant sense of the constant flux and hypnotic monotony intrinsic in urban life.
For more information on The Joffrey Ballet, please visit joffrey.org.
Posted by Bonnie Kenaz-Mara at 3:56 PM