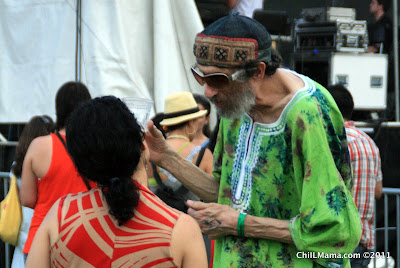 Lee checking out Soul Sonic Sirkus-a collaboration between Midnight Circus and renowned Jazz musicians from Liquid Soul (including Mars Williams) and throughout Chicago (including Jeff Parker from Tortoise).   We last saw Lee here, at The Old Town School of Folk Music's annual Folk and Roots Fest.
Due to Lee's untimely death December 9th, 2011 there will be a CELEBRATION OF LEE GROBAN’S LIFE & WORK on Sunday, December 18, 2011 from 1:00-4:00 p.m. at the Packer Schopf Gallery, 942 W. Lake St., Chicago, IL 60607. We encourage friends and family to bring their stories about Lee, as well as artistic, written or musical tributes, and to dress in Lee’s style if you wish. If you would like to make a presentation during the event, please email dickolson@comcast.net so we can allocate time. Please also send a copy to dgo@esoplaw.com. The family asks that donations go to the endowment fund of the Circle Pines Center, 8650 Mullen Road, in Delton, Michigan, 49046.
Check out Lee Groban's Website here.
The site says:   If you have ever been to an art event in the city of Chicago, you have likely seen the city's most renowned visionary artist, Lee Groban. Not only does Lee actively work within a variety of media, he is an avid supporter of the works of other artists. The next time you are at a gallery opening or other art-related event, look around. You'll likely see Lee Groban, doing his part to keep the arts alive in Chicago.

When you do spot Mr. Groban, feel free to walk over and introduce yourself. He will likely engage you in a most unique conversation. If you are an artist, he will definitely want to know about your work. And if you are a poetry afficionado, ask him about his own epic and internationally famous work, A Cure for Insomnia.
Back in the day, we used to see Lee EVERYWHERE.   In the early 90's, friends of mine and I even coined a Chicago Arts game called "Locate Lee", like the popular Where's Waldo Books.   We last saw him at The Old Town Folk and Roots Fest this past summer, at Soul Sonic Sirkus.
Here's some of our past Lee Groban coverage and one of my favorite stories.   I ran into him at one of Tony Fitzpatrick's openings, around 1991, and he talked my ear off and handed me sheafs of his poetry to read.   We hung out a while and when I excused myself to find my friends, he slipped me a tiny scrap of paper I still have today and said, "Here's where to locate me since I don't know how to find you."    The paper had his name and phone number, but what struck me the most was the caption after his name.    He'd written Lee Groban, Retired Beachcomber.    Rest in peace, Lee.   Your stories and works of art and poetry and cinematography will live on in infamy.   The world is a stranger, cooler, more wonderful place for having known you.
Obituary:Lee David Groban, a visionary artist and poet and an integral part of the Chicago art scene, Lee David Groban died Dec. 9 in Evanston. Lee was born March 20, 1947 in Chicago to Milt and Elinor Groban. He graduated from Bowen High School in 1965, earned a BA in Russian language and areas studies in 1970 at the University of Illinois at Urbana Champaign, and an MA in library science at Northern Illinois University in 1972. He was best known for his epic poem: A Cure for Insomnia which, in its film version, was listed as the longest film ever made in the 5th edition of The Guinness Book of Movie Facts and Feats. Now over 5000 pages, the poem incorporates his research into ancient ancestries and cultures. Lee's website, www.lee-groban.com showcases his outsider art. Much of Lee's zany performance art, performed from San Francisco to New York, is posted on Youtube. Lee is survived by his sister, Deborah (Richard) Groban Olson; his nieces and nephews, Dan, Josh (Amy) and Elizabeth Olson; his cousins, Alan (Andrea) and Betsy Grossman, Michael and Karen Groban and Marie Mendelsohn; his uncles Sid and Ray (Helene) Groban and many dear friends. A celebration of Lee's life and work will be held Sunday, Dec. 18 from 1 to 4 p.m. at the Packer Schopf Gallery, 942 W. Lake, Chicago. The family asks that contributions go to the endowment fund of Circle Pines Center, 8650 Mullen Rd., Delton, MI 49046. Arrangements by the Cremation Society of Illinois, 773-281-5058. 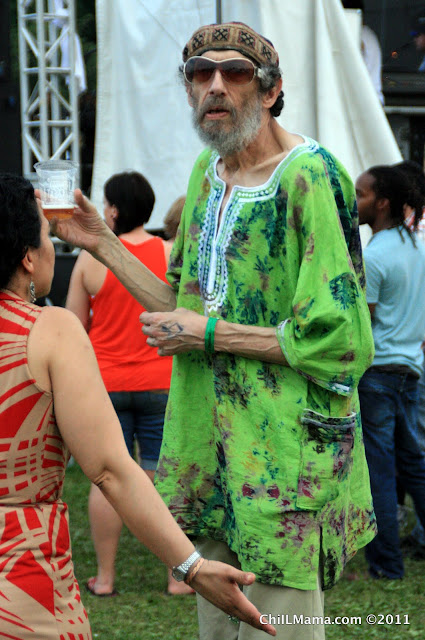 Lee Groban-a true Chicago character.  The world is a stranger, cooler, more wonderful place for having known you.
Posted by Bonnie Kenaz-Mara at 2:18 PM