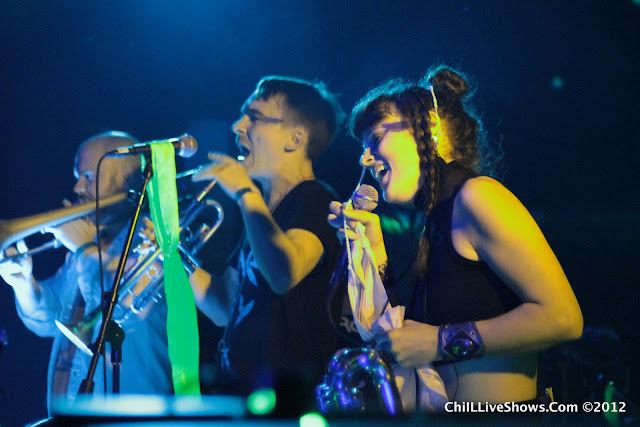 We've had the great pleasure of shooting Rubblebucket in action 3 times now--at Double Door in January of 2001, at North Coast Music Fest in August of 2011, and at Lincoln Hall on 9/11/2012. 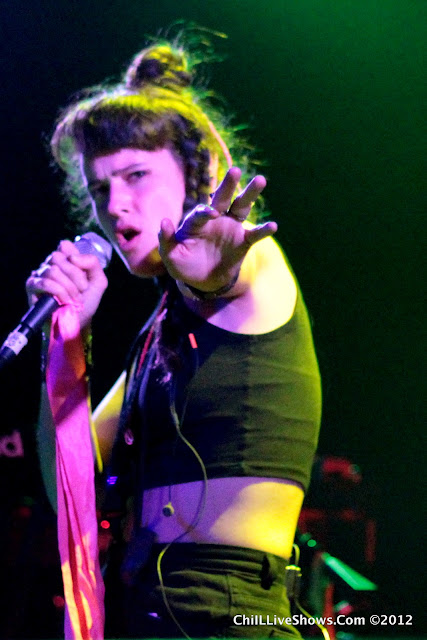 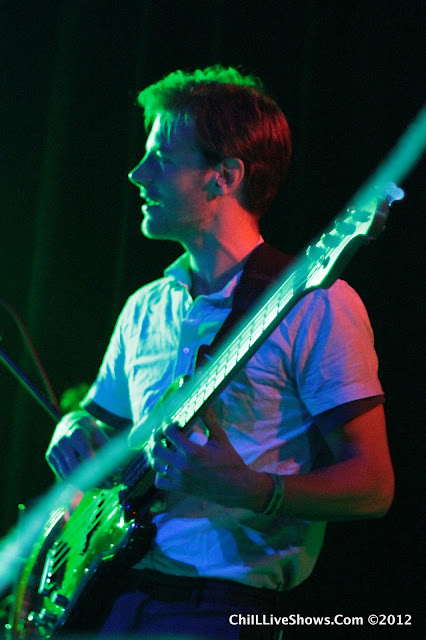 They put on a rockin' show, complete with a giant robot puppet who wended through the crowd while they covered  Blondie.    We particularly dug their rockin'covers of Rapture and Heart of Glass over what sounded like a Big Audio Dynomite beat! 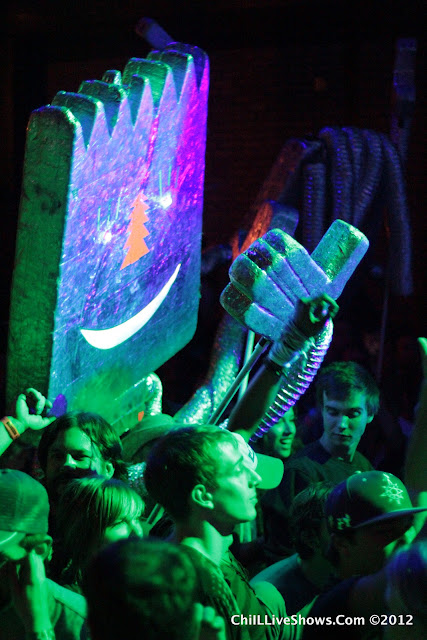 The mood was festive as this Lincoln Hall Show fell on Oversaturated EP release day and kicked off their current tour. 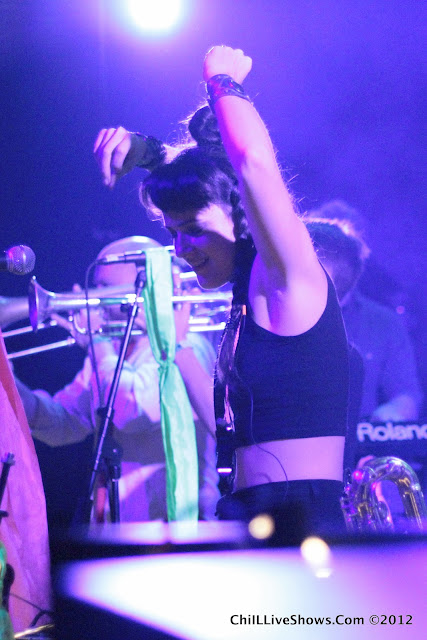 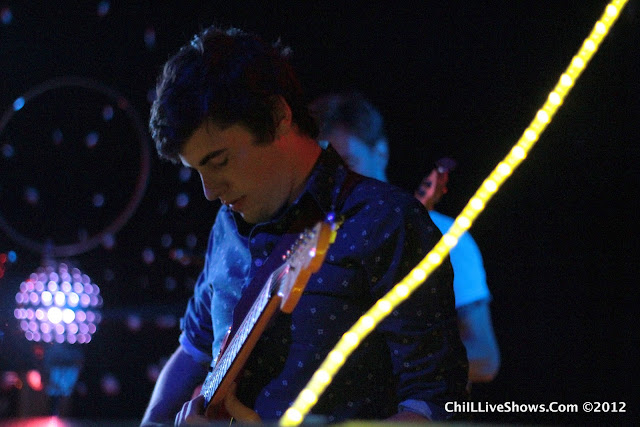 They played a few excellent track off their brand new EP and loads of old favs.    We highly recommend checking them out live. 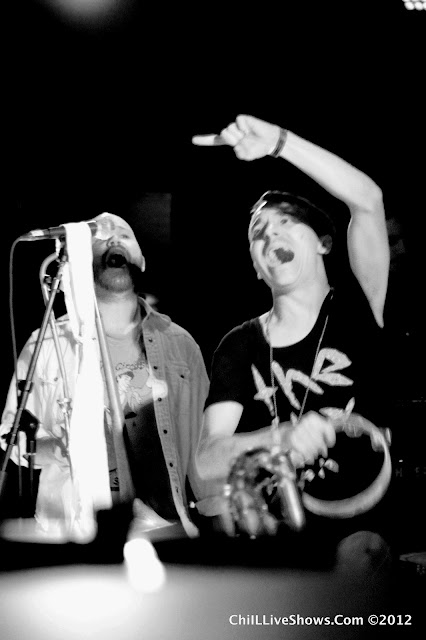 If you're familiar with our photography, you'll know we not only shoot faces, but feet as well.   It's fascinating to see who plays barefoot and what musicians choose for shoes.    We dig seeing where people get grounded and connect to the earth. 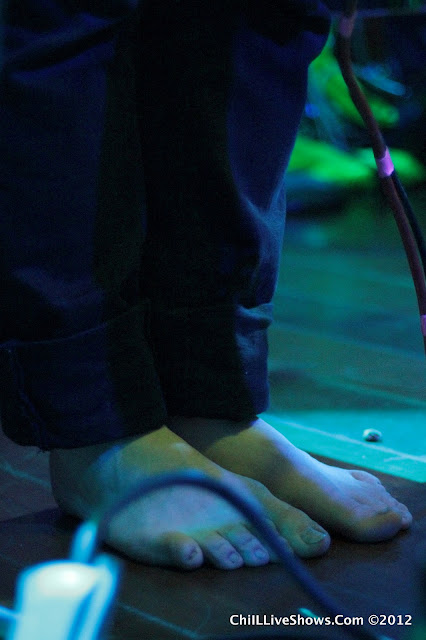 Their new material is danceable and fun, but they seem to be leaning ever closer to the synth/ house craze and away from the unique instruments of old, sousaphone, and jazz riffs.   The crowd still went nuts for the vocal jazz scat bits. 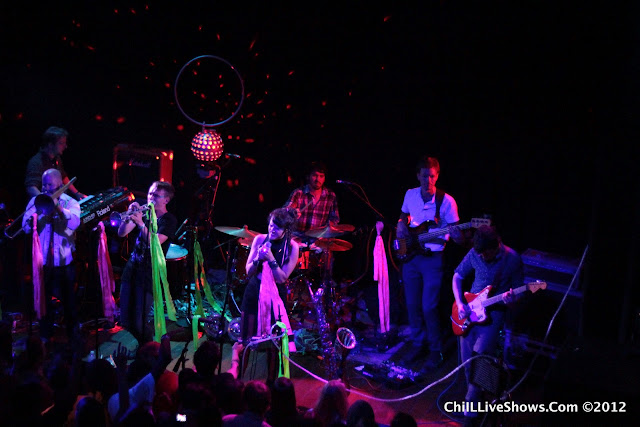 The horns were excellent as always, although the lead singer, Kalmia, played less sax this time around than she used to, and some of her sax parts were actually sampled and played through the keyboards. 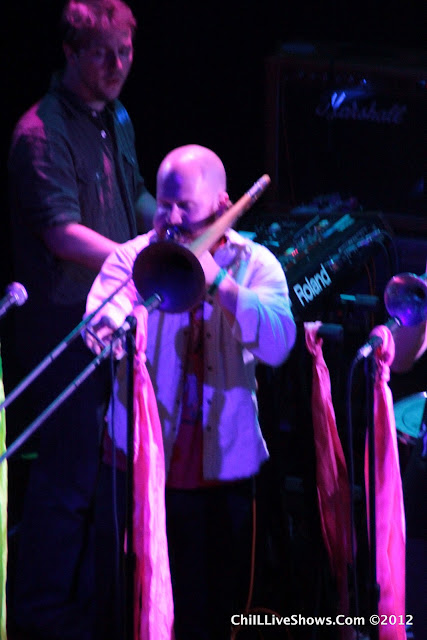 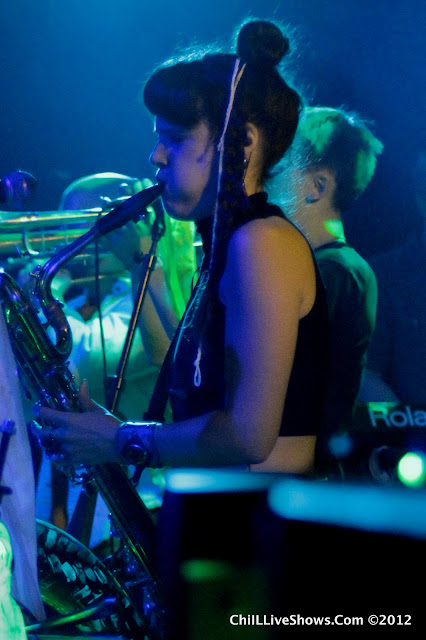 The band got up close and personal with the audience as Frontwoman Kalmia Traver first waded into the crowd and sang from their midst and later bandleader/trumpeter Alex Toth dove in for a bit of crowd surfing. 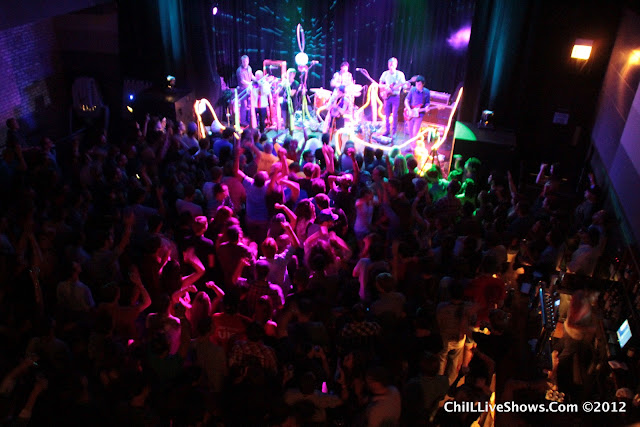 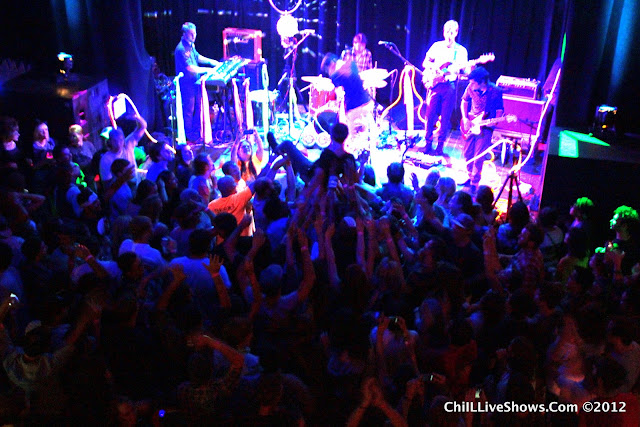 The show culminated in a big dance party on stage as Rubblebucket pulled eager fans out of the audience and up on stage.   Catch them if you can.   Highly recommended.   Rubblebucket defy easy classification and are an utterly unique melding of musical styles that truly shine live.   When Rubblebucket comes to town, you'd better put on your war paint and your party pants and get ready to rock! 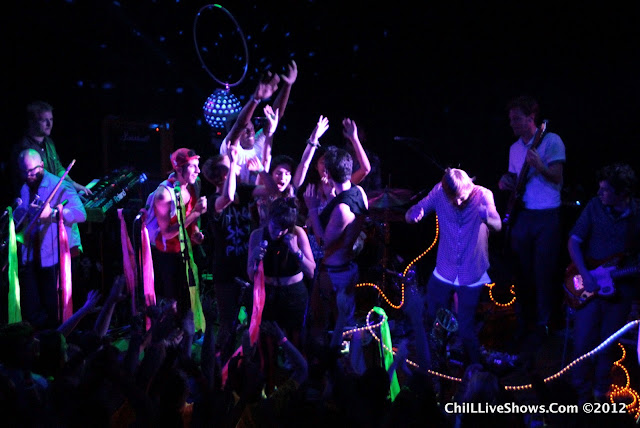 Rubblebucket's Official Bio Off Their Site

Led by the musical couple of front woman Kalmia Traver and bandleader/trumpeter Alex Toth, Rubblebucket has spent the last four years building a reputation as a band that blurs the lines between psychedelic indie rock, upbeat dance, and radiant, left-field arrangements. The Brooklyn, NY by way of Boston and Vermont band has evolved into something that is "utterly post-genre—horns, synth, guitars, harmonies—a smile-inducing point on the tangent that connects Björk and Broken Social Scene", which is to say that you never know what you'll see or hear next.

2012 has been a banner year for Rubblebucket, seeing the outfit grace the stages of Bonnaroo (with a surprise guest appearance with Foster the People) among countless other festivals, collaborate with heroes tUnE-yArDs and ?love for a Fela Kuti compilation, bring their raucous live show, along with giant robot puppets and love-tunnels, to larger and larger crowds across the US and receive love and affection from Paste, Rolling Stone, Stereogum, Wall Street Journal, Daytrotter and so many more. Now, on July 18th, the band will make their debut late night TV appearance on Jimmy Kimmel Live.

The band's 2011 album Omega La La marked a milestone for Rubblebucket. Recorded last year at Plantain/DFA Studios with Producer Eric Broucek (LCD Soundsystem, Cut Copy, Hercules and Love Affair) at the helm, the record was their most ambitious yet, with the band dipping into everything from dancey indie-pop arrangements to Fela-Kuti inspired afro-beat stomps. The record has earned a wealth of praise, with Stereogum hailing the record’s “tricky arrangements, whistle solos, and disco guitar leads” and Paste Magazine calling the album “instrumentally rich but catchy enough to ass-kick Katy Perry off the pop charts (in a just world)—mega-melodic without sacrificing an ounce of atmosphere or creativity.”
Posted by Bonnie Kenaz-Mara at 2:08 PM