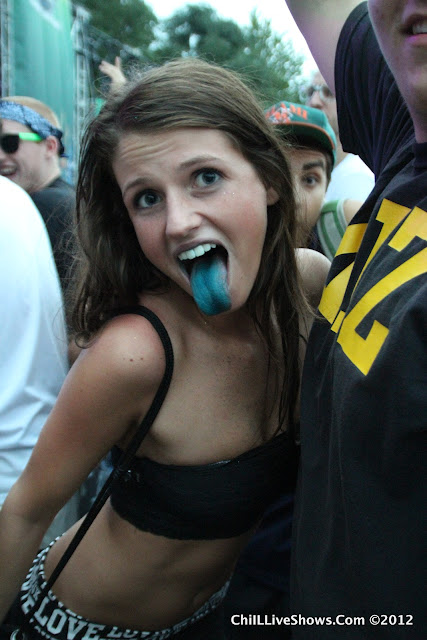 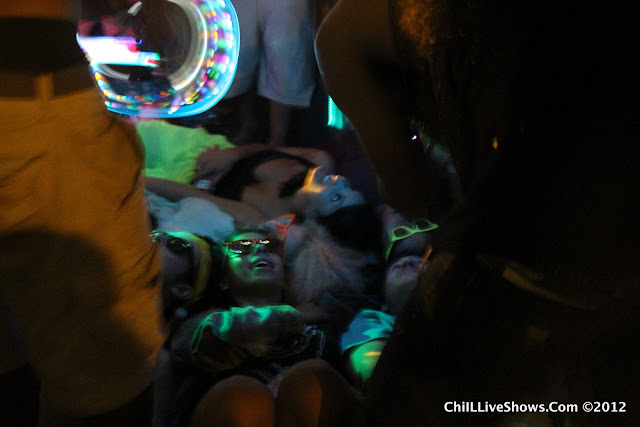 We're rockin' NCMF for the 3rd year.   Of course the people watching is prime. 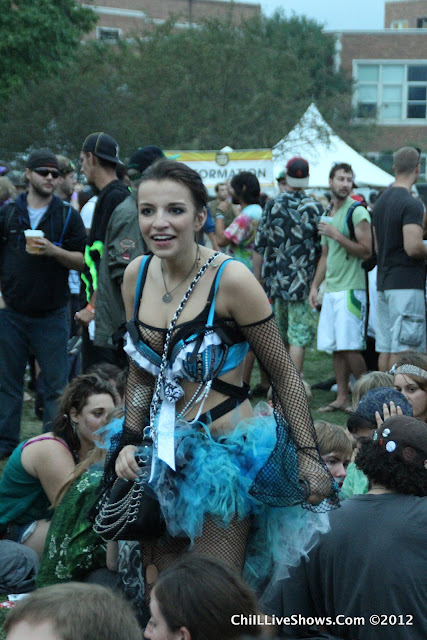 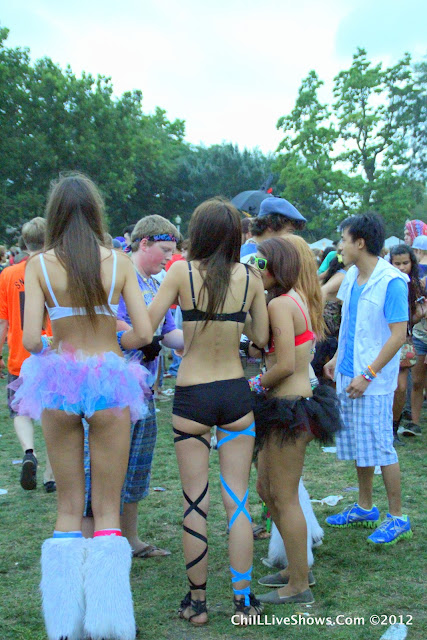 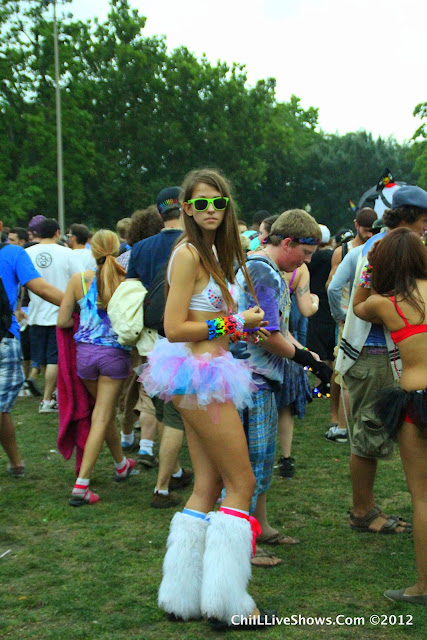 We ran into old friends and made a few new ones. 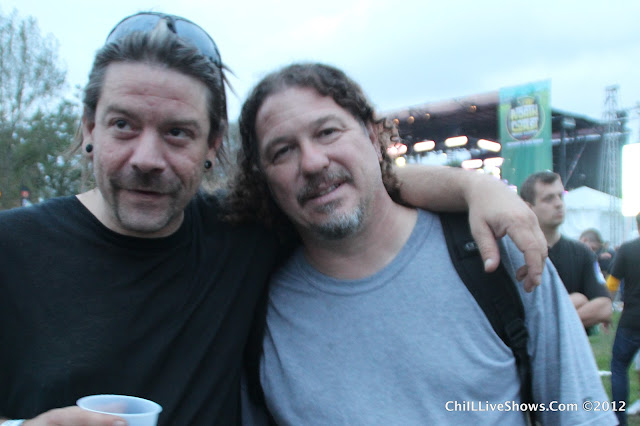 Predicted thunder storms held off for the most part.   Hope we're as lucky for Sunday. 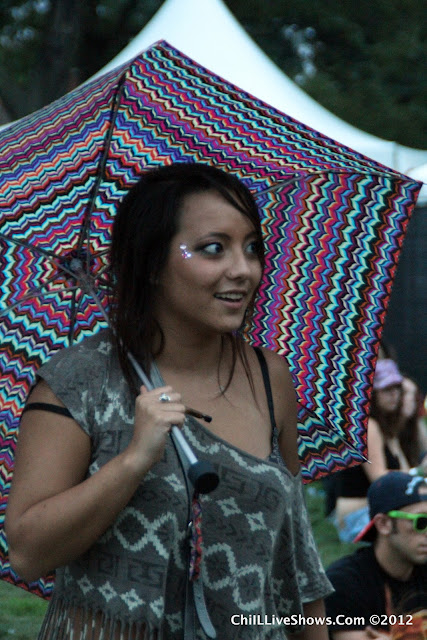 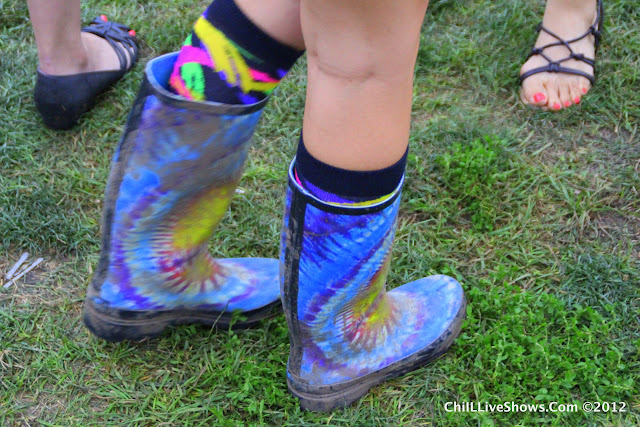 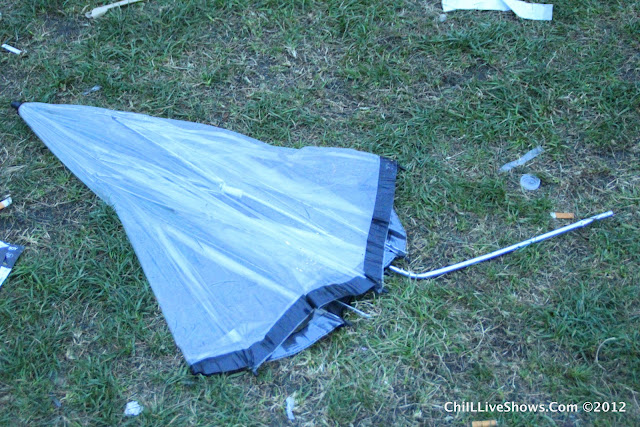 The sets we caught were Future Rock, The Rapture,  Atmosphere, Girl Talk and Umphrey's McGhee. 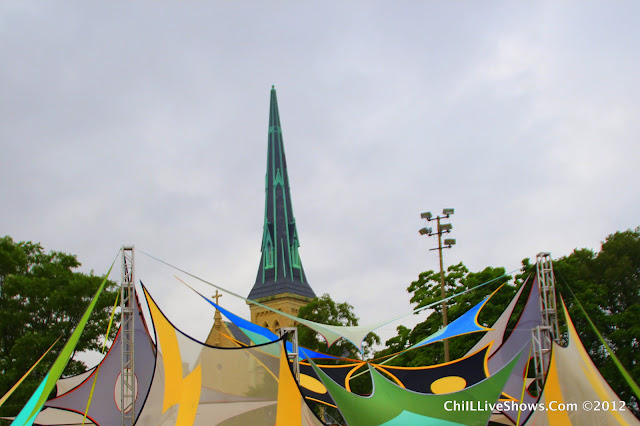 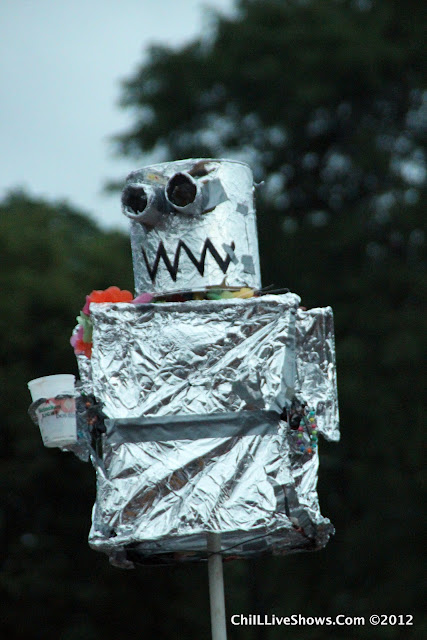 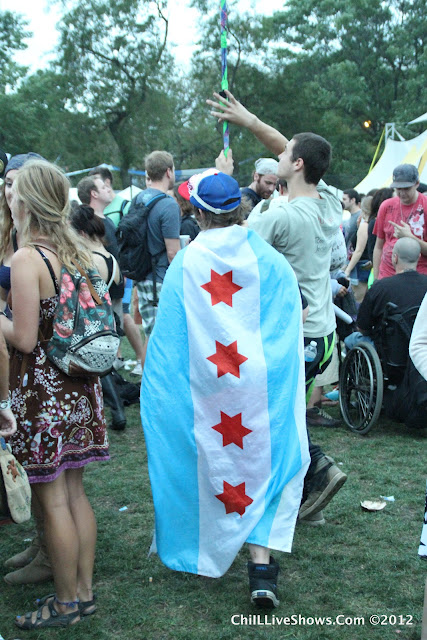 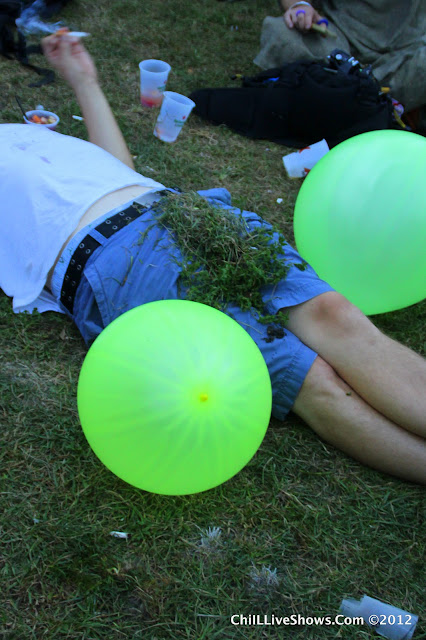 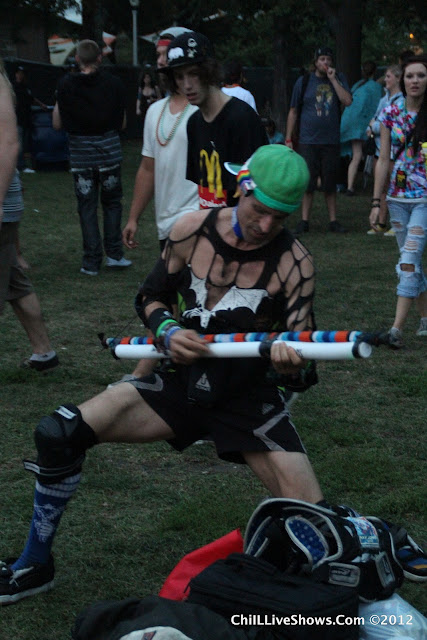 We had another annual Shreddy Shirt Boy (AKA:  Mat with one T) Sighting! 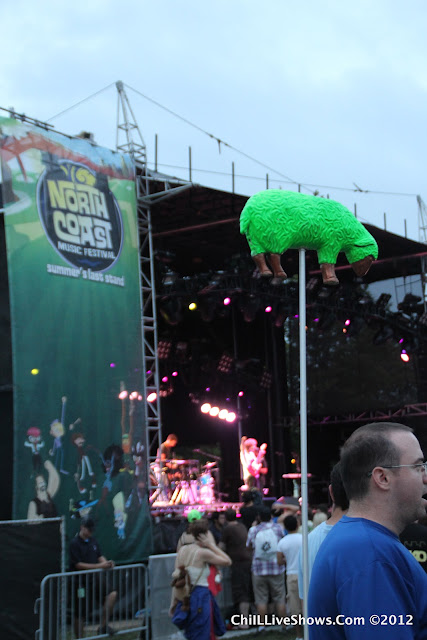 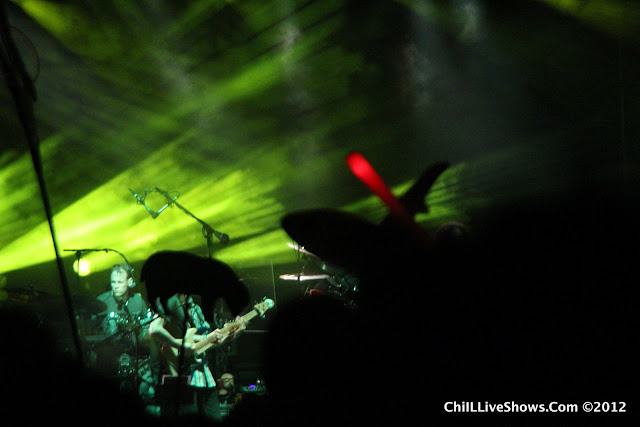 Even the Sheeple got in on the action!!

Highlights were The Rapture, who blew away the Coast Stage with sweet sax, cow bell, and rockin' vocals reminiscent of P.I.L.  We really dug them live and would catch them again in a second. 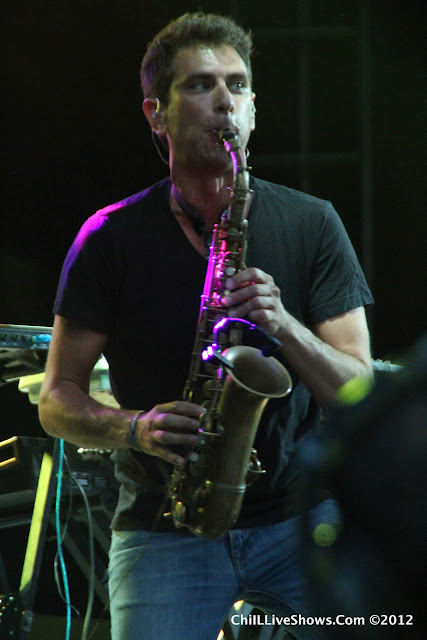 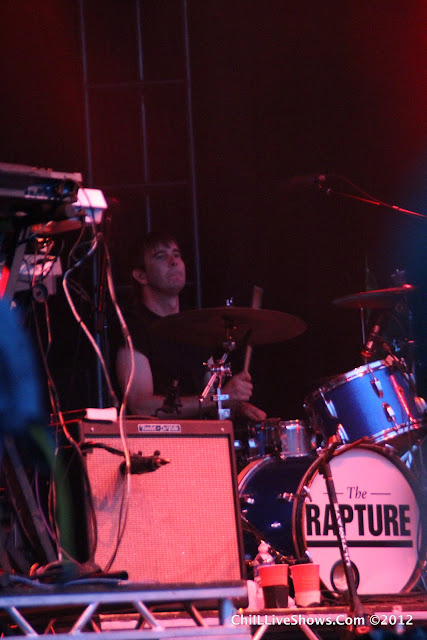 Girl Talk wasn't as stellar as the last time I saw him, but his sets are always a big dance parTAY, and yesterday was no exception.   He hand picks dancers throughout the day, to join in on stage, so there was an enthusiastic, colorful crew of eye candy. 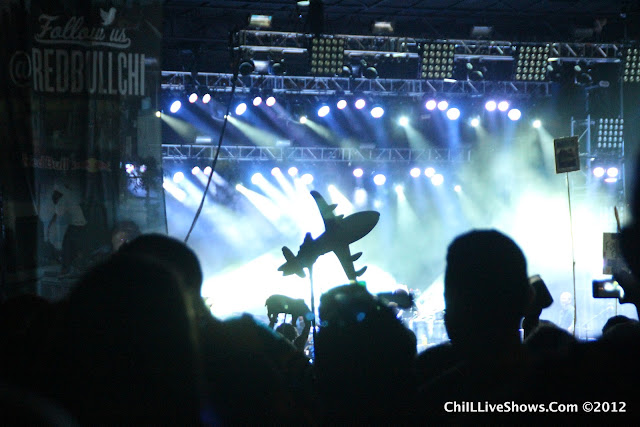 UM played a rockin' fest finale that was the icing on the cake.   We've watched them grow over the years from a semi-interesting, minor jam band to a force to reckon with.

NCMF hosed us this year, and instead of all access & pit photo passes like the past 2 years, we were stuck with GA.   There have been some management changes behind the scenes at NCMF and they seem to have forgotten who their friends are.   So, we don't have any close headliner shots this year--their loss.   We do, however, have loads of close pit photos of Umphrey's McGhee from Summer Camp Music Fest 2011 & 2012 we'll work up into an all UM feature and share here, with our readers.

So, if you're an old UM fan or someone new whose mind they blew last night, check back with ChiIL Live Shows like we vote in Chi, IL...early and often.   We'll have more sweet, photo filled features, tour news, free downloads, and reviews for you, in the very near future. The line for the Groupon Silent Disco was massive.   And we didn't see too many people over doing it on the party favors to the point of needing a police escort or an ambulance ride.   We only saw a few children, less than past years, despite the official party line-- kids welcome-under age 10 free.

I must say though, the NCMF litter was crazy over the top and we hit a LOT of music festivals.    Despite a recycling nod on the NCMF site and signage, the crowd trashed Union Park and seemed to not use the garbage and recycling cans much at all!    That said, there was a huge lack of garbage cans outside of the VIP lounge and by Groupon, so people were just dropping their empty cups and food trash in piles. We split the headliners, catching half a set of Girl Talk and half Umphrey's McGhee.   A huge, enthusiastic  crowd was gathered for both.   There were more "toys" at UM--glowing poi balls, hoops, and the ubiquitous glow finger glove wielders. 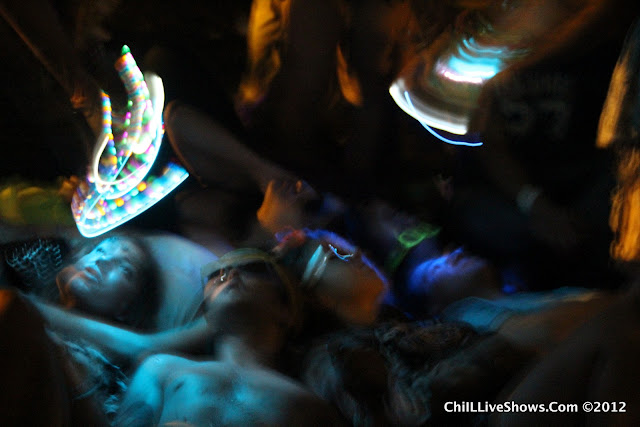 Seems like even the newbies without spinning talent can now get in people's faces and wiggle their fingers around, and find an appreciative audience.  We got some stellar hoops shots this year. 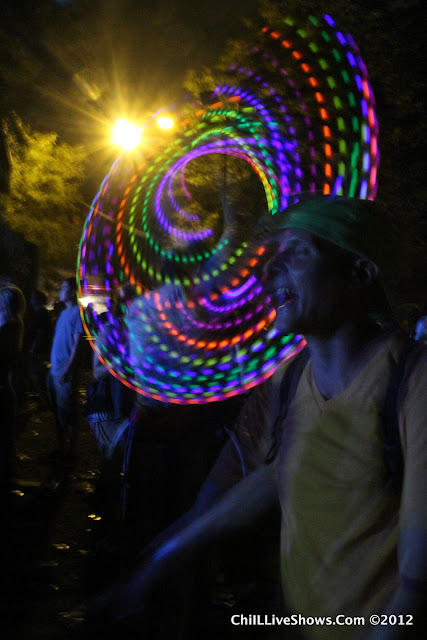 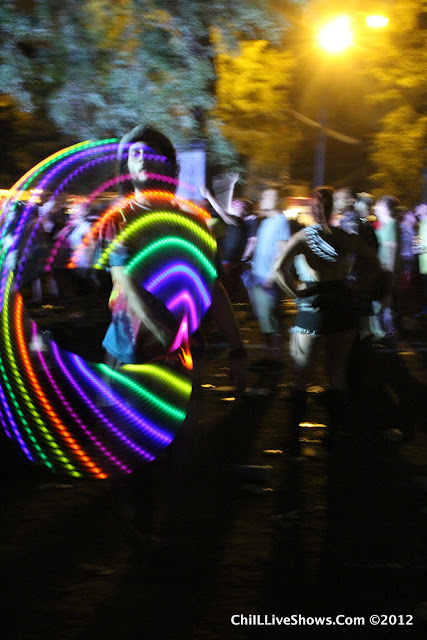 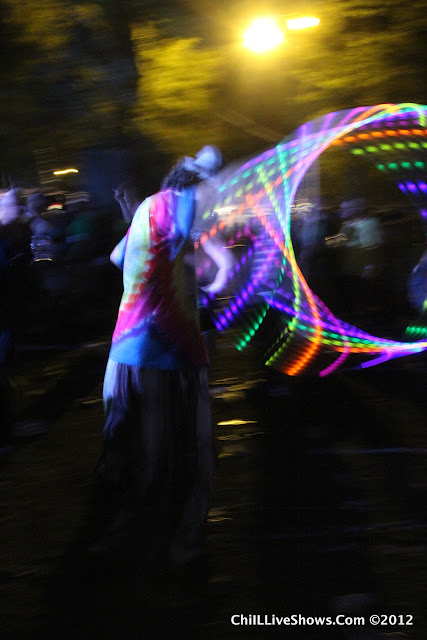 We'll be back today covering NCMF from Mathien and IndigoSky at 2:30, till the final notes of Pretty Lights fade out at 10pm.   Check out our must see list right here and our sweet Camaro SS loaner from Chevy--NCMF12 Sponsors, right here. See you out there.   And once again, check back like we vote in Chi, IL...early and often.   We'll have loads more NCMF recaps, Riot Fest previews and features, and more.

Posted by Bonnie Kenaz-Mara at 9:53 AM