**Our friend Sandman, The Rapping Cowboy, gave us the 411 on this awesome adult puppet show on tour right now.   His friends Britt and Ariel are storming Chi-town tonight (Sat 9/22) & Sunday on the south side and Tuesday on the north.   Check em out before they split outta town!!   Tixs only $10   **


Ironwill Tate is a fantasy-filled, comic adventure  for adults.  The show features over 30 handmade puppets in a variety of styles. The story follows Tate and his family on the last leg of their cross-country road trip.  Dying magicians, drunken zoo animals and giant robots compete for their attention but Tate will stop for nothing in his zealous quest to be reunited with the one thing he loves above all others.  Woven throughout are unusual vignettes which take the viewer  through strange realities.

Check out their main site here for more info. 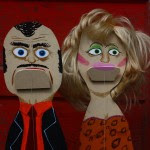 Bat Honey is the artist duo of Britt Juchem and Ariel Gregory.  Britt and Ariel have collaborated on stop-motion animations, murals, children’s books, board games and puppet shows.

Britt Juchem was raised in Pennsylvania.  Loving the excitement and close proximity of the East Coast, Britt would draw inspiration from the unique sights and sounds of the city and the crowds.

Ariel Gregory was raised in New Mexico .  A lad armed with a spear and the wide open desert,  Ariel’s work reflects a boy’s wild imagination. 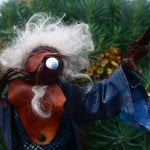 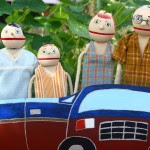 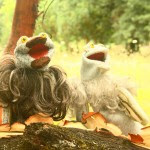 Two friends share the travails of life as pigeons