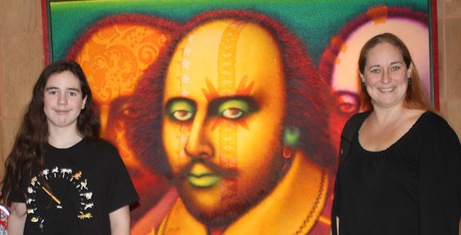 One of our family favs--Chi-town treasure,
Chicago Shakespeare Theater


Tonight and October 3rd we'll be at one of our favorite local spaces, the award winning Chicago Shakespeare Theater.   Check out their website for advanced tickets for their prolific, professional and profound offerings.

First up, we're super stoked The National Theatre of Scotland is presenting The Strange Undoing of Prudencia Hart.

We'll be at the opening tonight 9/27 and will have a full review up shortly.    I've got a soft spot for all things Scottish, with a husband and kids who are all a bit Scottish in heritage, and a Scottish name, Bonnie.  Of course I also dig Faust, the supernatural, devilish doings, Scottish tunes, and a good tale.   So, I'm particularly intrigued about the show.   Here's a little teaser:

Speaking of all things Scottish...

music and lyrics by Stephen Sondheim
book by James Lapine | directed by Gary Griffin
Originally Directed on Broadway by James Lapine
Originally Produced on Broadway by The Shubert Organization and Emanuel Azenberg
By arrangement with Playwrights Horizon, Inc. New York City which produced the original production of "Sunday in The Park With George" in 1983.
in Chicago Shakespeare’s Courtyard Theater
September 26–November 4, 2012

Chicago's award-winning theatrical powerhouse that brought you last season’s Follies—rated the "#1 Show of 2011" by the Chicago Tribune—kicks off the fall theater season with Sondheim and Lapine's soaring musical about a painter's struggle between creating art and living life. The dynamic setting of CST's Courtyard Theater will transform into a life-size masterpiece, bringing audience members closer than ever to this remarkable work inspired by The Art Institute of Chicago's celebrated Seurat painting. Book your tickets to this limited engagement today, and enjoy a spectacular night at Chicago Shakespeare Theater.

Approximate Running Time: 2 hours, 30 minutes (includes intermission)
Support of the acting company of Sunday in the Park with George is provided by Merle Reskin.
Music support generously provided by Gayle and Glenn Tilles.
Music Director Brad Haak is the recipient of the Bob Tilles Music Chair, supported by the Gayle and Glenn R. Tilles Music Fund.

Sunday in the Park with George is presented in the Jentes Family Auditorium.
Posted by Bonnie Kenaz-Mara at 4:44 PM

Email ThisBlogThis!Share to TwitterShare to FacebookShare to Pinterest
Labels: Chicago Shakespeare Theater, Stephern Sondheim, Sundays in the Park With George, The National Theatre of Scotland, The Strange Undoing of Prudencia Hart