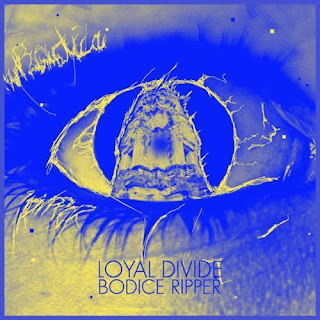 Friday (21+)
We've been trying to see Loyal Divide live since last January and have been thwarted at every turn, between kids with the flu and concert conflicts.   The buzz has been great and we've dug what we've heard.   We've even given away tickets to their past shows and run their creative videos here.    We caught a half set of theirs on the run at North Coast 2011, and were pretty impressed with their energy and live sound.   Hopefully this Friday we'll catch up with them live at their album release party at Empty Bottle and finally get to shoot some stills of the band in action!


FRI. 11/4/11 (10:00pm; $10)
Loyal Divide (record release) label: Kilo
Lasers and Fast and Shit label: North Gong
Verma
Tonight we welcome back local electro poppers/psych-rockers LOYAL DIVIDE, celebrating the release of their debut LP, the old timey racy-named Bodice Ripper. The praise has already begun rolling in for these fine fellows, with the FADER postulating, “if all things have a time and space, then LOYAL DIVIDE’s is in the air, probably above Turkey, when you’re taking the long way to Japan from Chicago, say around 1973,” and MTV dubbing the outfit, “infectious.” Earlier this year LASERS AND FAST AND SHIT released Second, an engaging mixture of punk abandon with a healthy dose of stoner metal's nodding and self-knowing winks and they open here tonight with VERMA, who have been reigning over the psyche scene with their atmospheric, synth heavy, trance rock. (IMPOSE)

Way back in 1994, I answered an audition notice in The Reader and embarked on two years of shooting a wacky cable sit-com called The Simply Marla Show (we hope to soon have it up on YouTube in it's entirety).   The show was a hilarious, well written, labor of love and I've remained friends with the masterminds behind it, ever since.   Two of the show's characters (also quite the characters in real life) died very young--before their 40th birthdays.   So, I'm especially happy to say the writer/creater and artist/producer are not only alive and well, but married, created a new human named Justice, became vegans, and have created an amazing annual event called Chicago VeganMania.
It's free, family friendly and tolerant.   You might not wanna bring a big turkey leg along, but vegetarians and omnivores are welcome.   Check out ChiIL Mama's photo filled feature from VeganMania 2010.

They're back and better than ever this year.   Here's what VeganMania has to offer:
We have a newly redesigned Vegan Food Court that makes it easy to relax and dine while enjoying great local entertainment and the good vibes of our dynamic community.

Hang out for a while. Once again, we'll have an eclectic mix of talented vegan performers from across the region. This year, we're working to expand our lineup beyond musical and dance acts to show you a truly diverse and exciting entertainment experience.

Then shop. We'll have two exhibit halls packed with dozens of vendors showing off unique vegan products and services, as well as our community's most vital nonprofit organizations.

Learn some new kitchen tricks. Last year, we introduced attendees to cooking demonstrations from some of the city and country's best vegan chefs. This year we're back with an exciting new lineup of chefs, with a new room layout.

Get inspired. As always, we will be bringing some of the nation's most dynamic vegan voices to energize and encourage, while teaching new knowledge, tricks and viewpoints.

And bring the kids. We have an expanded family center with crafts, storyteller, our Vegan Rockstar photo booth, graffiti wall and many other ways to give the young ones an experience they'll not soon forget.
Kids' Activities
We've expanded our Family Activities Area so the little ones can have hours of fun, including:
Kids can decorate their own vegan (and gluten free!) cupcakes from Bot Bakery chef Betty Alper,
Build their own nature journals with help from experts at The Peggy Notebaert Nature Museum,
Rock their way through a unique mini playground provided by Balance Boards and Beams,
Scribble and express themselves on the Graffiti Wall,
Build their own animal masks or partake in any number of other arts and crafts activities.
We'll also let everyone know when family -friendly acts like Kidz in the Mix or the hula-hoopers from Nahotnah are ready to begin on the Performance Stage
Also, the kids (and all the big people) may like to strike a pose at the Vegan Rockstar Photo Booth located upstairs in the Culture Café
Check out their main website for all the details. 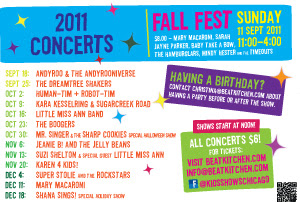 ChiIL Mama's sponsored Concerts for Kids series continues to rock Beat Kitchen with Jeanie B!   Congrats to our family 4 pack winner--Sandra P. & daughter, Samantha.   Their favorite music to rock out to together is Elvis.