Fired Up About Fully Charged
We had an entirely enjoyable night of circus arts and antics Thursday night at Allstate Arena in Rosemont.   The Ringling Bros. and Barnum & Bailey® circus is back in town with a compelling mix of fresh, new twists and old favorites.   And we got a charge out of the high energy, playful, daring show, for sure.

We went early and got our program guides signed by performers from China and Brazil.   We also got a close look at an aerial demo and some clowning, from the vantage point of the floor, center ring.    We highly recommend coming an hour before showtime and checking out the painting elephant, costumes to try on, and cool mini demos of upcoming acts.   Pre-show is free and the floor is open to everyone.


I took 2 boys who were 10 and 2 girls who were 8 and they all unanimously loved it!    My two are freshly inspired for their own circus arts classes Saturday, with new tricks and routines galore.   After studying circus arts for over a year, they have a keen interest and new appreciation of how hard the skills really are, even when the pros make it look easy.   Whatever your acro background, or lack thereof, Fully Charged is pure fun to watch.

Teachable moments
We began and ended with a few of those teachable moments life throws at you.   Outside the venue, we saw a line of animal rights activists with signs, eliciting a ton of questions from my curious group of tweens.   They're at that age where I knew hustling them away or ignoring their questions just wasn't going to fly.

I tried to keep it neutral, and explained that some people think it's not fair that the people get to choose to perform in the circus, but the animals don't have that freedom.   I went on to say, that one of the coolest things about living in our country is that people are allowed to put on shows with elephants, zebras and tigers, and people who think that's not a good plan are allowed to protest it, too.   People can peacefully agree to disagree and everyone gets to express their views.


The kids took it from there, with a smart and lively discussion amongst themselves, where they all debated whether they would rather be animals in the wild with freedom, but the downside of predators, possible starvation, and other hazards, or live the circus life.  They all thought it would be pretty cool to perform in the circus and have plentiful food, water, human company and loads of treats for a job well done.  Ringling Brothers and Barnum & Bailey circus is also known for their elephant conservation efforts.   After we left the shivering protesters outside, the kids were excited to be given elephant conservation wristbands at the door, and wore them proudly. 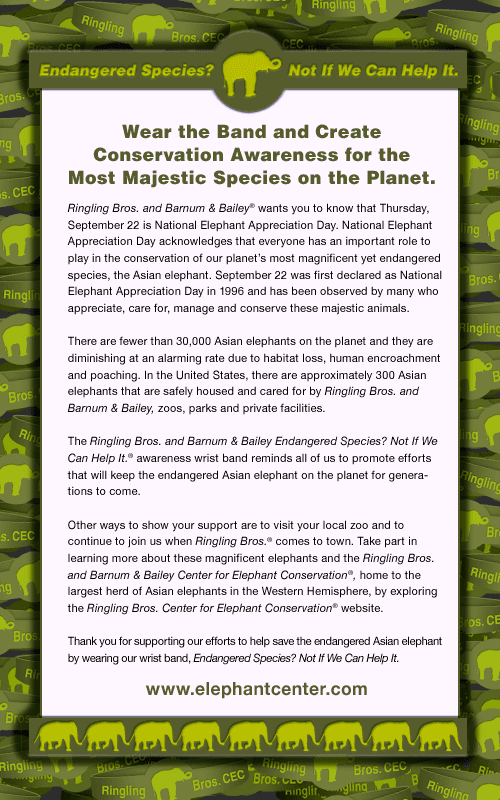 After the show we had another unfortunate teachable moment.   Feld provided program guides for the kids, which they were elated to have and happily took around to the performers for autographs before the show.   They spent pre-show and intermission pouring over the colorful, photo filled guides and figuring out who all the performers were and what country they call home.    I was amazed how much the kids were enjoying the program books.

After the final act, we gathered up our coats and discovered someone had stolen Sage's signed book!   We all stayed and searched everywhere in our row and the rows above and below, but it had vanished.    I was so peeved that someone would steal from an 8 year old child.   We were naive enough to think we could hit the bathrooms without lugging our program books and coats along, and not have things vanish into someone's sticky fingers.   Arrrg!

Sagezilla took it better than I did, and although she was sad, she was pretty stoic about it.   It even gave big bro Du-Jay a chance to be noble and offer to share his program with her.   So, we reinforced the urban rule.   Don't leave anything you value unattended.   Stealing is always wrong, but some people's parents don't teach them that or they get greedy and don't always make great choices.   And, being on the losing end of a theft gave Sagezilla the empathy that I believe will make her an honest kid if she's ever tempted to steal from someone else.

Despite a bit of a rocky start and end, through no fault of the circus itself, we had a great time, and highly recommend checking out Fully Charged.    They'll be entertaining Chi-Town for a good chunk of the month, first at Rosemont, then at the United Center.   Check 'em out and remember ChiIL Mama's readers get a discount by entering the code MOM.   Click here for all the discount details.


*For review purposes, Feld gave us free show tickets for ourselves and a 4 pack for our readers, but the opinions expressed are my own.
Posted by Bonnie Kenaz-Mara at 11:09 AM