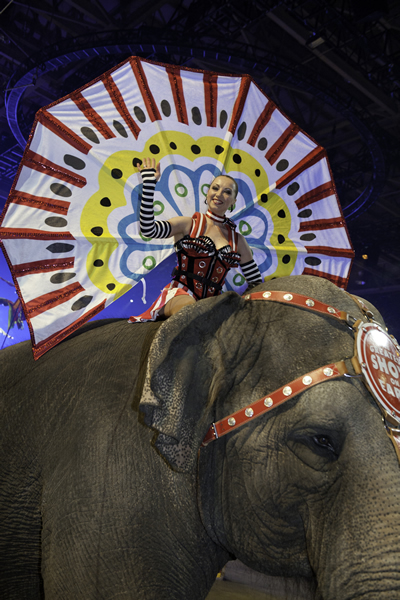 photos by Feld
We'll be enjoying The Greatest SHOW on Earth tonight and we'll be back with a photo filled recap tomorrow.  Congrats again to ChiIL Mama's family 4 pack ticket winner--Jay A.
Coming your way with an amazing array of performers and animals from around the globe...
It’s Ringling Bros. and Barnum & Bailey® Presents FULLY CHARGED.
Here's a host of fun circus facts about this extraordinary production from Feld Entertainment.
Didja know?
Behind the Scenes:  The PERFORMERS, CAST, and STAFF


• The Red Unit has a total of 340 members – including performers, cast, staff, train crew, pie car crew, animal crew, backstage departments and concessionaires.
• While some live and travel by trailer, the majority lives and travels on the circus train (about 270)• There are 118 performers, including a nine-member live band.
MULTICULTURAL
This international cast and crew originate from four continents, and include individuals from 17 different countries including:
Argentina,Brazil,Canada,Chile,China,Hungary,Kazakhstan,KyrgyzRepublic,Mexico,
Morocco, Russia, Ukraine, Spain, Trinidad, United States of America, Uzbekistan, and Trinidad.
The eleven major languages spoken backstage include Arabic, Mandarin Chinese, English, Hungarian, Kazakh, Moroccan, Portuguese, Romanian, Russian, Spanish, and Ukrainian.
• It takes about 16 hours to set up the entire show for the first performance in each city. • It takes about 6-8 hours to tear down the show and load the circus train for each trip.
• Collectively, the cast of Fully Charged represents several thousand years of performing experience.
CIRCUS FAMILIES
There is a fully staffed nursery, day care and traveling
school on tour with each Ringling Bros.® touring
unit to accommodate the many families who compose the circus cast and crew.
THE ANIMALS
Our performing partners!


• All animals are groomed and exercised daily, either in the arena or in practice areas set up in the animal enclosures.


• Did you know? Each stripe pattern seen in the zebras and tigers is unique to each individual animal, similar to fingerprints or iris patterns in humans.


• Did you know? Each Asian elephant is born with toenails, hair, and four teeth – two upper, two lower. An elephant may get up to 6 sets of teeth in a lifetime.


• Did you know? In 1995, because of a deep commitment to the conservation of the endangered Asian elephant, the Ringling Bros. and Barnum & Bailey Center for Elephant Conservation® was established in central Florida. It has become a global leader in the reproduction, research and retirement of these magnificent animals, and works with partners world-wide to help ensure the survival of the species.


The Pie Car:  America’s true traveling diner
• The Red Unit Pie Car, or dining car, boasts a custom built kitchen and dining area to serve hot meals to circus cast and crew each day
• The Pie Car is located in the center of the living coaches so circus artists and staff have access to it whether the train is moving on the rails, or parked in a city.


• Whenever the train is moving, the Pie Car is open 24/7 and serves as a social center as well as a restaurant.


• Combined, the Pie Car on the train and the Pie Car Jr., which serves meals at the arenas, prepares approximately 109,000 meals each year.


• On certain days, the Pie Car menu features special meals representing the many foreign countries that the performers, staff and crew come from.


THE TRAIN
• The Ringling Bros. and Barnum & Bailey® circus train that brings Fully Charged® to each city on tour has a total of 59 cars, and has a total length over a mile long.


• Periodic water stops are scheduled during train trips to refill water tanks for animals and people. • Special stops are arranged on longer trips so the animals can get out for exercise. • Each year an average of 1000 hours is spent traveling by train from city to city. • The average distance the Ringling Bros. and Barnum & Bailey® train travels between cities is 350 miles.

• The red unit train will travel an average of 16,000 miles in one year going coast to coast.


• The train master walks a minimum of 3 miles per day in taking care of every aspect of the Ringling
Bros. train.


• Each train car is custom built for a specific purpose at Feld Entertainment Rail Recycling Center in Palmetto, FL • It takes the Ringling Bros. rail recycling team 9000 man-hours to build one train car for The Greatest
Show On Earth®.


• Did you know? The animal cars always ride at the front of the train, assuring the smoothest ride, right
behind the engine!


COSTUMES
• More than 100 costume technicians, milliners, cutters, drapers, tailors, finishers, and assistants spent a total of 48,000 hours to create and build all the costumes for the Fully Charged® production. This does not include the many hours dedicated to the design process for each costume.


• The costumes were all built in about 12 weeks. • There are over 550 costumes in the production, with more than 100 hats, and nearly 1,000 shoes. • And to bring on the bling, more than 3,140,000 rhinestones and sequins were applied to the costumes
for this year’s production.


• Did you know? A full time wardrobe staff travels with The Greatest Show On Earth® to maintain the costumes so they look perfect, whether for the first opening night, or the last performance of a thousand show tour!


MUSIC/LIVE BAND
• The Ringling Bros. production Fully Charged® tours with a live band of 9 musicians, who play an amazing 23 different instruments throughout the show. Their collective experience in the live music business is over 200 years.


• There are 175 pages in the musical score: If the pages were laid down end to end, the score would be over 160 feet long, or the length of 11 cars parked bumper to bumper.


• There are 180 uniquely different pieces of music used in the show, which are custom composed for this production, and include more than 30 different musical styles.


• More than 300 sound effects are used in 1 show.  In one year, the saxophone player goes through 500 reeds, and the drummer uses over 300 drum sticks!


• Did you know? Musically speaking, each Ringling Bros. performance may be slightly different, as the band leader conducts the music to match the unique movements of the animal and human performers, unlike a show where performers conform to prerecorded music,


LIGHTS/ELECTRIC/EFFECTS
• Nearly 100,000 pounds of equipment hang from 100 electric chain hoists • It takes almost a mile of cable to run electricity to all the lamps and computer boards for the show • 150 moving lights are remotely controlled to accomplish every light cue in the show • The suspended trussing on which the lights are mounted is made of aluminum... at an approximate cost of $1.75 oz of AL per can, you could make about 250,000 soda cans out of the Red Unit trussing.(Estimating 25,000 lbs of trussing)

• An additional 10-12 spotlight operators are hired locally in each city. They rehearse lighting the show one time before the audience sees it. • Did you know? The Lighting Designer, part of the creative team for each Feld production, creates a custom design for each act in the show – giving it the proper color, intensity, angle, and other lighting effects to make each act look spectacular.
SPECIAL EFFECTS
• Hundreds of Pyrotechnics effects are used to add pop and excitement to the show, adding electronic exclamation points which punctuate the total performance. Highly trained pyrotechnicians travel with all Feld Entertainment touring productions to ensure safety in the use of flames and pyrotechnic effects.


• Confetti Canons – 8 confetti Canons are use in the finale number of each performance of FULLY CHARGED. Over a one year tour, more than 2000 pounds (one ton) of confetti will be used.


SOUND
• The four person sound crew takes 8 hours to set up the sound equipment in each new location on tour with Fully Charged.
• The show uses 8000 feet or 1 1/2 miles of microphone cable; 5000 feet (almost a mile) of power cable; and has a capacity of 150,000 watts of power


• The show’s two Digico D5 mix consoles each have a capacity of up to 96 channels of audio input. • There are 12 channels for Wireless Microphones, and 11 channels for wireless In-Ear Monitors • 5 microphones are used during rehearsals for foreign translators to make sure cast members hear the director’s requests. Languages spoken are Mandarin Chinese, Russian, Portuguese, English, and Spanish


• 62 Speakers totaling 11850 pounds, or 5 1⁄2 tons, are suspended from the aerial trusses • Did you know? The sound technicians vary the volume in the show depending on the needs of the performers. For instance, they lower the music volume when trainers are working with animals, or when aerialists need to hear verbal cues from each other for safety and communication.

If you fall in love with the circus and wanna join up--start locally with circus arts for adults and kids at CircEsteem!    Here's our photo filled recap from their recent FUNdraiser for college scholarships for their Circus Team Kids.    Everyone had a chance to try their hand at trapeze, gym wheel, tight wire, juggling, diablo and more--even parents and newbies.
The talented Circus Team kids travel the city and even the nation performing.    They've even gone as far as Germany and Ethiopia for circus exchanges!   Both ChiIL Mama's own Sagezilla & Du-Jay have taken circus arts classes here for over a year and love it!    Highly recommended.
Once again, for Ringling Bros. and Barnum & Bailey® Fully Charged! tickets, take advantage of ChiIL Mama's special offer with the code MOM. 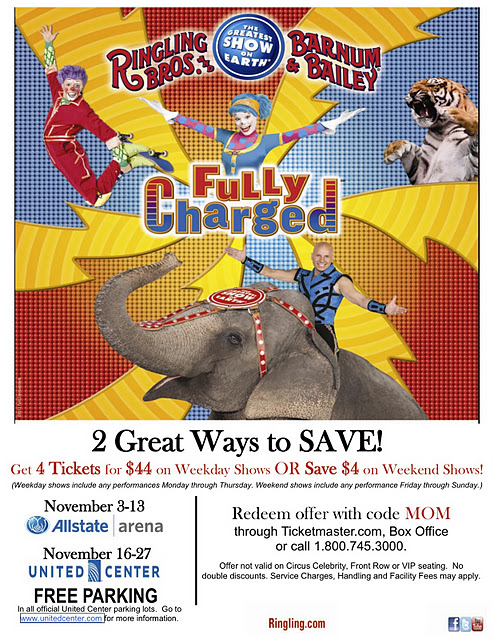 Posted by Bonnie Kenaz-Mara at 1:27 PM