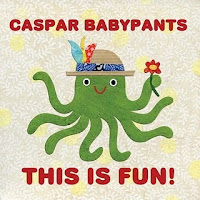 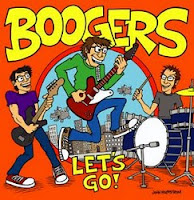 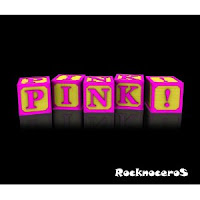 We'll start off 2011 with a theme--The Exclamation Point!   Three of our favorite CDs from 2010 were This is Fun! by Caspar Babypants, Let's Go! by The Boogers, and Pink! by Rocknoceros.   These will be our first Win A Disc Wednesday bands of the new year.

Then, for the final week of the month, we have a BIG!   Exclamation Point Worthy!!  Keller Williams Give Away!!!


Keller has long been one of our favorites and the kids were jammin' to and loving his music from toddlerhood on.   Now he has a disc specially for the littles.   Keller has made his first foray into kindie rock, with his aptly named CD, Kids.

Yeah, yeah....I know there's no exclamation point after Kids, but Keller makes the cut because his brand new children's book, Because I Said So!, and his live concert, No Kidding!, both do.   Also, when you hear we're giving away 4 tickets and 3 Kids CDs to lucky winners, you'll have some exclaiming to do! 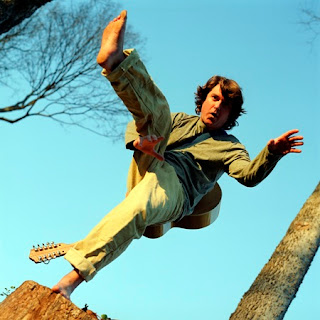 ChiIL Mama had a chance to preview and give away one Kids CD and a copy of Keller's new book/CD combo as part of our big Kindie Holidaze event, right before Christmas.   And I can honestly tell you, they're great. 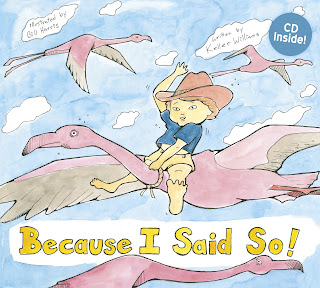 Here's our January line up culminating with 3 Kids CDs, and 4 No Kidding! tickets--a huge Keller Williams bonanza on the 26th.   The dates below are when we will post each review and the winners will be chosen the following Wednesday.   Enter any time from now till each winner is chosen.


Featured CD of the week:
5th-This is Fun! by Caspar Babypants
12th-Let's Go! by The Boogers (click the links for ChiIL Mama's coverage)
19th-Pink! by Rocknoceros 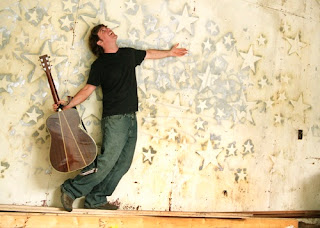 Our first review up is Caspar Babypants, This is Fun!, just released in November. 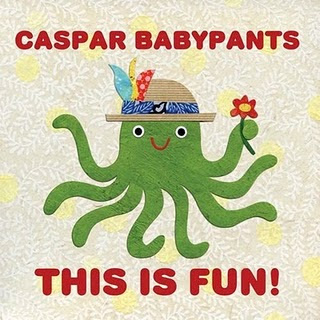 We first took a look at this baby October 27th, which I'll repost instead of linking here, so nobody gets the old and new entry forms confused.


Don't let the name fool you.   This is not another Barney or Wiggles knock off.  Caspar Babypants has all the irreverant genius of Chris Ballew, front man and Grammy nominated songwriter for four times platinum rock band, The Presidents of the United States of America.

We've rocked out to The Presidents of the United States since BC--before children--way back in 1995.   And those songs still live in infamy on the ipod.   We actually have a little blue dune buggy (69 VW dune buggy) and an abiding love of peaches, 80's punk covers, witty word play, and quirky innuendos.

We've always introduced our kids to a wide range of musical styles and artists, and not censored much.   Music is music and there's so much great stuff out there that we don't limit the kids to stamped and approved "kids' music".  But sometimes that method comes back to bite you in the butt!   If the sound of your littles belting out "I can't get your body out of my mind" leaves you a little green around the gills, but you don't want to sacrifice clever lyrics that make you chuckle when you're stressed out and running late, here's a kid disc you've gotta have.

Sagezilla and Du-Jay both enjoyed this 20 tune disc, despite being well beyond babyhood.   A number of songs that include the word baby like "All You Pretty Babies", Baby's Getting Up", "Bounce Your Baby", and "Baby And The Animals" may be off putting to slightly older kids who consider themselves more grown up than that.   Chris Ballew does seem to have the preschool "swing set" in mind here.   That said, this disc is not babyish or condescending and these are some good, fun tunes that all ages can sing and dance to.

My kids grew up on Nirvana and Kurt Cobain, so they were excited to recognize "Sliver" on This is Fun!   Chris Ballew doesn't just cover it--he's actually got Krist Novoselic from Nirvana on bass!


Ballew's goal is to reduce stress in everyday family life.   He says, "I'm very serious about making something to help the world relax and help parents take time to sing with their kids and enjoy music together.   I work with a number of non-profit groups that focus on early childhood education and parent education and provide assistance to homeless and low-income families.   If I can make songs that lighten the load for someone under stress or get a family singing, then I am doing what I was put here to do!"


Ballew has succeeded in making some seriously silly songs that will have families relaxing, dancing and laughing together.

Caspar Babypants is  Chris Ballew, lead singer and Grammy®-nominated songwriter for the four-times platinum rock and roll band The Presidents of the United States of America.  As Caspar Babypants, however, Ballew’s focus is on music for kids and families.  The 2009 debut Caspar Babypants album HERE I AM! was named the #1 Album of the Year by Warren Truitt on Kids’ Music That Rocks and was also included on the Zooglobble list of “My Favorite Kids’ and Family Albums of 2009.”  Later in 2009 the second Caspar Babypants CD MORE PLEASE!  was chosen among the Best of the Year by Cool Mom Picks,

Chris Ballew as Caspar Babypants is a master storyteller, and the very intelligent, compelling music he creates never gets in the way of the “story line” of the song. The third Caspar Babypants album – set for release on November 2 – is THIS IS FUN! It’s filled with great stories dressed up as songs, providing families with a  wonderful listening experience that’s at once classic and contemporary, drawing as much from traditional American folk and bluegrass tunes and African American spirituals as it does from The Presidents of the United States of America and Nirvana. The album’s twenty songs are straightforward, yet quirky; edgy yet friendly, set in musical styles ranging from the hard-driving shuffle of “Speedy Centipede” to the country stylings of “All You Pretty Babies” and “The Cuckoo” to the sweet goofiness of “Googly Eyes.”  Special guests on THIS IS FUN! include Krist Novoselic from Nirvana playing bass on the Nirvana song “Sliver,” as well as contributions by preeminent children’s musicians Elizabeth Mitchell on the duet “Dark of Night” and Charlie Hope on the timeless folk song “Mister Rabbit.”

Chris Ballew made a conscious decision to limit his time rocking out with The Presidents and devote most of his energy to working with kids and families.  He’s on a mission to use his music to help lessen the stress of everyday family life.

“#1 ALBUM OF 2009:  HERE I AM! This is modern folk music at its best, and some of these tunes are destined to become classics. Chris Ballew, of the indie rock band The Presidents of the United States of America, delivers a debut children's album that's full of witty, wordy, silly, gentle, quietly acoustic new traditional tunes.”

“MY FAVORITE KIDS’ AND FAMILY ALBUMS OF 2009:  HERE I AM! It’s just simple, organic kid-folk and pop.  With his Caspar Babypants project, Chris Ballew might make a whole bunch of great CDs for the family. HERE I AM! is the first of them. Highly recommended.” – Stefan Shepherd, Zooglobble“BEST OF 2009:  MORE PLEASE!  I'm betting Caspar Babypants will be a household name soon enough, especially with his second CD following on the heels of his much-loved debut, HERE I AM! ...  But what I really love are his slightly twisted lyrics, which he's honed for years as the front man of the Presidents of the United States of America (remember ‘Lump’?).  MORE PLEASE! is made of the same oddball stuff sprinkled with kid-friendly sweetness.”
– Christina Refford, Cool Mom Picks

You can get more info at the Caspar Babypants website.
Enter here for your chance to win any or all of our exclamatory CDs and tickets!

We're going to try something new for the new year and offer all the January CDs the first week, but still post reviews and chose winners one week at a time, to make it even easier for you to enter once for all artists you are interested in and spread the word.   We'll even give you xtra entries for Tweeting or sharing on your blog or Facebook.  Tweet all ya want, just don't splat on my windshield and look out for picture windows and sliding glass doors.
One entry per family per artist--xtra entries for documented sharing.  All you need to do is:


****BONUS:  One extra entry for each social media outlet you share this on, but you must include your blog link, Twitter post, etc. on the additional entries for them to count.

Here are the featured discs and dates.
Enter now through February 1st.  Each week's give away closes at Tues. midnight.   Winners will be announced each Wednesday.   *Click on the band links for ChiIL Mama's prior coverage.
Posted by Bonnie Kenaz-Mara at 6:15 PM