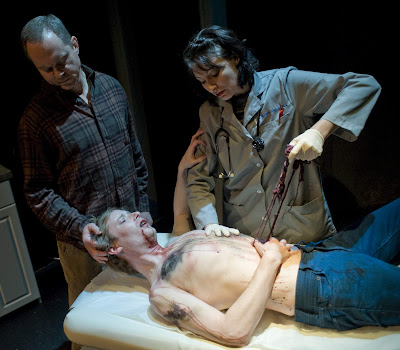 You can imagine, any theatre piece that closes with The Pixies song, Gouge Away is going to be an intense experience.   I checked out the opening night of Odradek at The House Theatre last night and Gouge Away was an extremely appropriate exit song.   That said, if you have an appreciation of the macabre and enjoy Kafka, then this is one production not to be missed.


Playwright, Brett Neveu, has created a dark and intricate web of a piece that gets under your skin and seeps into your brain and burrows there.    I'll be contemplating the poetic language and brutal mind games of this play for a while.  Neveu was inspired by the Franz Kafka short story:  The Cares of a Family Man and the Jeff Wall painting:  "Odradek".


House Theatre's world premier of Neveu's Odradek introduces us to 3 characters, boy, doctor and father, whose complexity is belied by their simplistic names.   They are brought to life by House Company members Joey Steakley and Carolyn Defrin and newcomer, David Parks.   Odradek is enhanced by a dark, original score by composer/co-sound designer, Josh Schmidt and live double bass, played by music director, Ruben Gonzalez.

If that's not enough, the eerie manifestation of mental illness incarnate, created from skillful use of puppets and shadow play, makes this unique production well worth a look.  Odradek, the beast beneath the stairs, is fed emotional and physical parts of the young boy, until the child finally makes an ultimate escape.


You will be wondering for days, just who is sane and who insane, as this fractured family wanders through the aftermath of divorce and tries to head off the boy, Kyle's, annihilation.   I though it was an especially powerful staging choice to have the booming, disturbingly garbled voice of Odradek created in real time by the doctor and the boy's father, for although the beast is the boy's creation, their words and actions give rise to much of his "voice".   If even half of the young doctor's actions are real and not hallucinations, do no harm doesn't factor in to her repertoire.    Her medical practice is more hypocritical than Hippocratic as her patient is literally and figuratively coming unraveled.


Odradek is billed as part Midwestern Gothic Fairy Tale and part Hitchcockian thriller. It is self rated R, and although their release suggests sharing it with your friends who are parents and with every young adult you know, parents are strongly cautioned to only bring kids in their upper teens or older.   If in doubt,  check it out first.    Intense themes of self mutilation, self destruction, and the mental and physical break down of a young boy may be over the top, even for some adults.


We know many parents and educators who are dealing with self destructive behaviors in the children under their care.   And I'm sure there are plenty more with cutters, anorexics, and kids who are a danger to themselves and others, who are living in denial, or who keep silent out of embarrassment.   Troubled kids often fall through the cracks.   It's a theme well worth exploring and excavating in the realm of theatre arts.


After the show, I had a chance to hang out with playwright, Brett Neveu, director, Dexter Bullard and David Parks, who plays the father.   Dexter had loads of insider information on how the creepier illusions were accomplished.    I think the logistical choices are intriguing, so I'll try to recount a few here without any spoilers.


The House Theatre made a concerted effort to go mainly low tech and let the audience fill in with their imaginations.   They use creative lighting, shadows and basic puppetering to suggest and then reveal Odradek.   Basic illusions chiefly dealt with hiding things and pulling things out.   When copious amounts of blood were too much for squibs, they found a simple but ingenious solution.


This is the first time The House Theatre has worked with award winning playwright, Neveu, and actor, David Parkes.  However, Dexter the director previously worked on Neveu's Gas For Less at The Goodman Theatre, a show he describes as the antithesis of Odradek.


Neveu lived in Chicago for four years, but left for the warmer winters in L.A.    He's doing penance for leaving, now though.   The playwright is stuck here in the dead of winter, while he works on not only Odradek, but Red Bud for The Royal Court Theatre and Do The Hustle with Writer's Theatre.


As much as I was intrigued and affected by it, Odradek is not for everyone.   At the after party, one of the ensemble members said the play had so unhinged her date that he fled.   When the author jokingly apologized she laughed and said, "That's OK.    I was more than ready for that date to be over."   I was instantly transported back to 1991 when I saw the movie, Naked Lunch with my sister, her friend, and a date who completely freaked out.   He left the movie yelling at us, "What was that?   What did it mean?   Do you usually go see things like this?"   How do you answer that?   I don't think I'd ever seen anything quite like Naked Lunch, let alone usually, but I wasn't offended or mentally unbalanced by it.


He was confused and angry at the David Cronenberg movie and even more furious at the rest of us for liking it.   Ultimately he stormed off, unwilling to even discuss it.   A few days later he called me for another date and I was more than happy not to see him again.    I did, however, see Naked Lunch again and pour through the library's collection, checking out all the William S. Burroughs I could get my hands on.   Odradek made me want to return to digest it again, and then run to the library for a Kafka fix.


I think maybe Kafka and Burroughs are on to something.    I've always told people that before you waste years dating someone you think you're in love with, take a road trip with them and you'll see what they're really like and how compatible you truly are.    I'm thinking it may be simpler than that.   If you want to get down to the elemental level of what someone is made of, just take  them to Odradek.

Posted by Bonnie Kenaz-Mara at 8:43 PM

Email ThisBlogThis!Share to TwitterShare to FacebookShare to Pinterest
Labels: the house theatre, Theatre