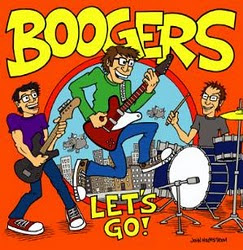 Let's Go! is the much anticipated, 13 track, new release by The Boogers.   They're one of our favs at ChiIL Mama.   These guys are 80's punk rockers from back in the day, who played a string of dive bars for the 21+ crowd until they became parents themselves.   Then they turned their creativity and energy toward playing gigs that didn't require paying a $10 an hour sitter, for 6 hours, to go play an $8 punk show.

Like my husband said about parenting, in one of my all time favorite quotes, "I never really knew what anarchy was, until the kids jumped on my head!"   The Boogers are taking their newly won punk AND parent cred to the streets and declaring PLAY(reasonably) LOUD.

This hard rocking CD is aged up considerably from their first release, Road to Rock, which was fun, too, but more focused on adding punk speed and riffs to traditional kids songs.   Let's Go! has many more originals and is straight up punk rock, that older kids won't outgrow fast.   They even managed to get a forward by Monte Melnick, Ramones Tour Manager (1974-1996) and author of "On The Road with the Ramones".   This CD also features sweet art work by punk underground artist,  John Holmstrom., who has done art for The Ramones and a number of punk bands.   Let's Go! is undoubtedly one of my favorite kids' discs of 2010.

One of the best tracks is Baseball Bat.   The Boogers have taken The Ramones, Beat on the Brat and replaced the lyrics with an innocent, t-ball themed, kid friendly alternative.    I had the kids who grew up on the original and belted out "....beat on the brat with a baseball bat....oh yeah....oh yeah....oh oh.." at the most inopportune moments.    The Boogers have retooled a fun alternative, with all the catchy hooks of the original, that won't earn you a visit from DCFS.

There are still a few kids' classics like London Bridge, The Big Rock Candy Mountain, and Pop Goes The Weasel, but they're fast, fun and mosh pit worthy.    Two of my favorite originals are Eat Your Vegetables part one and two.    Along with the title track, Let's Go!, you will find these songs seeping into your daily repertoire and coming out of your mouth.   Somehow directives are much more fun when sung, and there's nothing like snarling out Boogers lyrics to encourage healthy eating and herd the hordes out the door.    You'll feel less stressed and get results.

In the interest of full disclosure, though, I do have to say my snarky punk daughter (7) does not like The Boogers and won't even give Let's Go! a chance.    She's presently living, eating and breathing Queen.   Kids are fickle creatures, and two months from now it may be her favorite.    Even The Boogers admitted in our interview, that the heavier edged stuff on the new album took their own kids a while to get used to.    Other kids jump right in and love it.

My husband and I both enjoy The Boogers, especially their live shows, which we saw several of as a family.   Big brother, Du-Jay (9), likes some of their new tunes, but mostly sides with his sister.   Both kids adamantly refused to go in December when we had 4 tickets to their Subterranean show.   This put us in the amusingly awkward position where both adults wanted to see them and we were almost back to that $10 sitter, so we could go see a freakin' "kid's show"!    Ultimately my husband bit the bullet and stayed home with the kids and I went to cover their show solo.

I've been trying to figure out Sagezilla's hostility.    The Boogers certainly elicit strong emotions in her.

It seems like this would be a natural love.   She devours 80's punk, loves The Ramones and claims The Dead Milkmen as her 2nd favorite band after Queen.    However, she was just brutal when I asked her opinion on the new CD.   She said, "The Boogers are NOT The Ramones for kids.   The Ramones are The Ramones for kids."
We always review CDs together, as a family.    They're kids after all, the resident experts, so I do factor in their responses and opinions when we review kids' music.   So, I'm not going to gloss over the negative.  In fact, I put off our "official review" for months, hoping we'd reach a little more consensus, because there was such a split in our opinion of Let's Go!.   We've finally just agreed to disagree.

But hey........punk is all about individuality and being true to yourself.   Don't tell me what to like.   Come on out to see them live (bring earplugs for the littles), and form your own opinion.   The over 10 set in our family thinks The Boogers rock!
Posted by Bonnie Kenaz-Mara at 2:20 PM