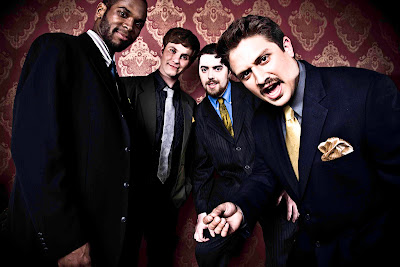 
To keep up to date with Concerts for Kids, become our Facebook friend at www.facebook.com/kidsshowschicago.

ChiIL Mama's been takin' names all month, but entries close tonight at midnight.   Once again we have 2 tickets for a parents' night out Thursday with The Shams (18+) at Lincoln Hall Thursday, January 27 2011 8:00 PM.
18+ $8.00.   Then we have a family 4 pack of tickets to Winter Fest at The Beat Kitchen Saturday at noon.


These shows are gonna be good ones.  Enter at the bottom of this post for your chance to win!   Finally, we are also still taking entries to win a family 4 pack to opening night of Monster Jam, Monster Truck Show at Allstate Arena on Friday, February 11th.   Concert ticket winners will be announced tomorrow during Free Tickets Tuesday.   You can enter to win Monster Truck tickets through Tuesday 2/1/11


We had a chance to check out The Shams at CBBF and can't wait to see 'em again.   And Saturday, Beat Kitchen features a whole afternoon of kindie rock and punk for the littles.   There will also be punk hair coloring and styling, crafts, and even a chance for your rock stars to strut their stuff on stage on Amerikid Idol.   A keyboard and mic will be in place, and you can bring an ipod or CD to accompany, or DIY.


Here's what's up for Thursday:


After opening for Edward Sharpe & the Magnetic Zeros at the 2010 Chicago Bluegrass and Blues Festival, The Shams Band looks to develop their own nitche in the Chicago music scene. These young garage rockers bring energy, passion and captivating harmony to every live performance.
“The Shams Band scene was reminiscent of a southern dance hall upturned by bad-boy rockers. If it weren’t for their mid-western look, a body almost forgot she was in Chicago. With tinges of Wilco, Chuck Berry, and Sly and the Family Stone wrapped up in a rootsy twang package, the energy of The Shams Band is contagious.” -Erin Keane [Via Chicago]
Follow | @TheShamsBand | @DNelsonMusic
Enter here for your chance to win:
Posted by Bonnie Kenaz-Mara at 10:29 AM

Email ThisBlogThis!Share to TwitterShare to FacebookShare to Pinterest
Labels: Parents' Night Out