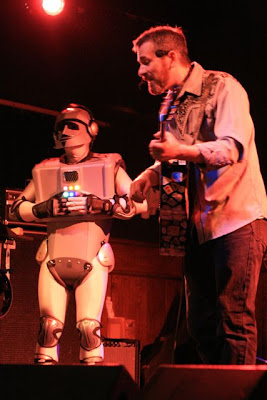 Human Tim + Robot Tim at Schubas
photo by ChiIL Mama, 2011
2011's off to a great start and ChiIL Mama's got some editing to do!   We have ELEVEN exclusive, never before seen, band interviews to start the year off right, and more lined up.   We'll be parceling them out for months to come, and pairing 'em up with free show tickets and CDs, disc reviews, and features.   Enjoy!


We've now interviewed 3 bands with both Mom and Dad in them, 3 bands full of just the kids 13-16 (oh yeah.......and a 25 year old babysitter).    And a number of kids punk and indie (kindie) bands.   It's been so much fun getting to know everyone better and hearing everyone's take on topics like music, life, the environment, how creatives parent, and how parents create.


Here's what you can look forward to:

We're All Punk Parents:   Interview with members of

THE WEBSTIRS
WALLY DOGGER (Record Release!!)--You can check out their whole CD for FREE on their site--fun stuff!
THE NOSES
THIS MAGAZINE IS HAUNTED
COTTON PONY


We talked to a mix of parents who incestuously overlapped in many of the 5 bands above.   Our interview includes a couple dads and 1 kick ass punk mama, Ellen, who sings, plays a wicked bass, and can still spout a plume of Pabst Blue Ribbon on stage, with the best of 'em.   Hear them expound on how parenting littles has changed their writing tempo and their lives, what the kids think of The Sex Pistols, and Ellen's brilliantly snarky, kittencentric rant about parenting philosophy, full of chunks of wisdom like "we're all assholes and little Buddhas at the same time."


One of the dads we interviewed from The Noses is award winning playwright, Brett Neveu, who has two world premiers in Chicago right now.   Odradek is playing at The House Theatre in Wicker Park and Do The Hustle is playing at Writers' Theatre in Glencoe.   Check out our past coverage on these guys HERE and HERE. 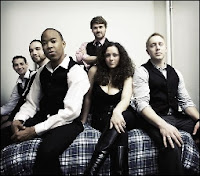 How Far To Austin:   Interview with Tate and Katie, band mates and life mates who walk together, rock together, and have a four year old daughter, Grace.   Check out their interview for insight on children as music critics.   If their daughter runs down the hall naked, humming the melody, they know they might have something there, and it's likely to make the cut.


These guys are talented and genuinely nice.   I was relieved to make it through the interview without calling' em Kate and Tatie or inverting the locations on their band name and new release--respectively How Far To Austin and Goodnight Madison.   We also had a fun, chat with their drummer, who is a proud father to 6 year old son and potential future drummer, Tyson.   We'll be featuring ticket give aways to all their upcoming shows and have 4 copies of Goodnight Madison for upcoming Win A Disc Wednesdays.


**We have loads of CDs from many of these bands, for lucky weekly winners


Prichard-punk parents who still rock out for the 21+ set

Purple Apple
The Blisters
When Flying Feels Like Falling

Check The Archives For Past Interviews With:

Danbert Nobacon, former lead singer for Chumbawamba, author of an anarchist fairy tale illustrated by Alex Cox (director of Sid and Nancy, Repo Man and other cult classics), and father to 10 year old twins.   We also have live concert footage.