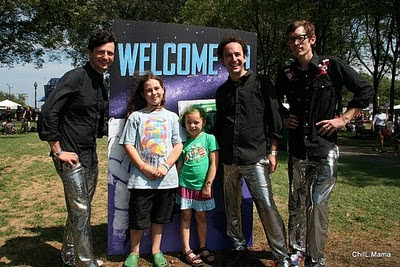 Wednesdays rock at ChiIL Mama.   Whether you are just getting to know us or have been subscribers for years, welcome and happy new year.   In 2011 we will continue to give away a CD every week, and bring you reviews, live concert tickets, photos and videos.    We will also feature band interviews with more of our favorite musicians for kids and adults.


There's an exciting, ever growing base of great, new music for families that we'd love to introduce you to.    And we know that if you loved music b.c. (before children), you don't necessarily lose all your brain cells and your taste in music, just because you're now someone's parents.   At ChiIL Mama, Wednesdays are all about music....fun, rockin' great music that crosses a lot of styles and genres from punk and metal to folk and funk.


Instead of raucous parties and mind blowing concerts, all nighters may more often involve teething toddlers or waiting for wayward teens now.   But there are plenty of parents in audiences and playing in bands themselves, who still live for live music.   So, we cover all ages shows where you can jam as a family and "parents nights out".   These are 21 and over shows for some live music therapy, when you need a sanity break.


2010 was a big year for us.   We had the pleasure of interviewing The Verve Pipe, Recess Monkey, Candy Band and Tim and The Space Cadets on camera, and Lollapalooza Co-Producer, Tor Hyams in print.


We covered legendary, rockin' Chicago music festivals including Lollapalooza, Kidzapalooza, Northcoast Music Festival and Chicago Bluegrass & Blues Fest.   Prior to that, we featured Pitchfork and Summer Camp Music Festival in 3 Sisters Park.   Of course, we also love the multitude of amazing free concerts in Millennium Park, Grant Park and street fairs throughout the city, and let you know when those are going down, too.


Early this year, we'll bring you new photo filled recaps and unseen footage from the big outdoor fests, along with info for pre ordering your 2011 tickets.   Chi Town may be in the deep freeze for the next few months, but we're past the darkest night of the year, and summer music plans are in the works already.


2010 was amazing, but this year is shaping up to be even more interesting!   2011 looks to be loaded with great new music.   Also, we'll still post everything here first, but we'll also be archiving just the live music related photos, videos, and interviews on a separate blog, ChiIL Live Shows, so they'll be easy to find.

We'll be giving away a CD a week, every Wednesday.
Future Win-A-Disc-Wednesday Bands Are:

In 2010, we gave away family 4 packs of tickets to shows at S.P.A.C.E., Schubas and Subterranean, including The Verve Pipe, Gustafer Yellowgold, Little Miss Ann, and The Boogers.

We also reviewed and gave away CDs from:

*Click on the band names above for ChiIL Mama's reviews, interviews, photos and videos.   In many cases we featured multi day coverage, so you can also use the handy search bar to the right of the posts, if you want more. 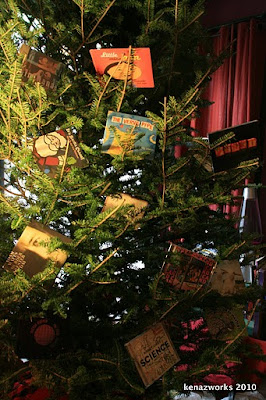 We wrapped up the Win A Disc Year with our 6 artists in 1 week, Kindie Holidaze Give Away!


1. Keller Williams--new CD entitled Kids, and his brand new Because I Said So book/CD combo give away.
In 2011 we'll have 3 more copies of Kids and a family 4 pack of tickets to see Keller live in Chicago at Park West on February 5th.
2. Dan Zanes--an autographed cd-- Rocket Ship Beach- Dan's 1st family album- currently celebrating 10 years of all-ages family music.
In 2011, we'll have reviews of Dan Zane's Rocket Ship Beach and 76 Trombones as well as live footage from Kidzapalooza and an intimate solo set at the VIR (very important rocker) brunch.
3. Gustafer Yellowgold--DVD/CD set, Have You Never Been Yellow?, give away
In 2011, we'll be reviewing Gustafer Yellowgold's new DVD/CD combo, Infinity Sock, coming this March.   And we'll be giving away a limited edition, signed and numbered, “retro-screened” Gustafer Yellowgold’s Infinity Sock poster.  This poster will look like the Infinity Sock logo (the cover art for the DVD/CD set).
4.  Candy Band--High Five CD give away
In 2011, we'll give away 1 more copy of their latest release, High Five.   We'll also post an exclusive interview with our favorite punk Mamas from Detroit and ChiIL Mama's live concert footage from Kidzapalooza 2010.
5.  Flannery Brothers--CD give away
In 2011, we'll have 2 more copies of The New Explorers Club, the latest release by The Flannery Brothers
6.  Bari Koral--CD give away
We'll have concert tickets and more CDs from numerous artists throughout 2011.   So check in at ChiIL Mama like we vote in Chicago--early and often! 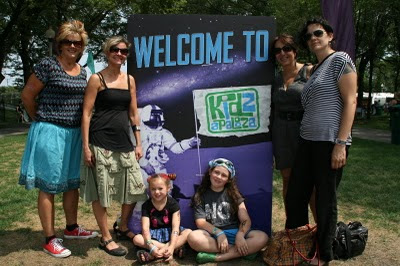