We can't wait to monkey around tonight with some of Chi-town's Best and Brightest Performing Arts Companies & Artists and our long time favs, Barrel of Monkeys!   As in "more fun than..."

Chicago's Weird Grandma... and proud of it!

Come on out and see just how weird and wonderful it is when the unbridled creativity of kids' stories is given a voice, costumes, and a platform!   These guys are some of our favs and it's been too long since we've made it out on a Monday to give them props (...of the word variety... not actual props.   Those they have a treasure trove of).   We'll be there tonight and have a full review up shortly. 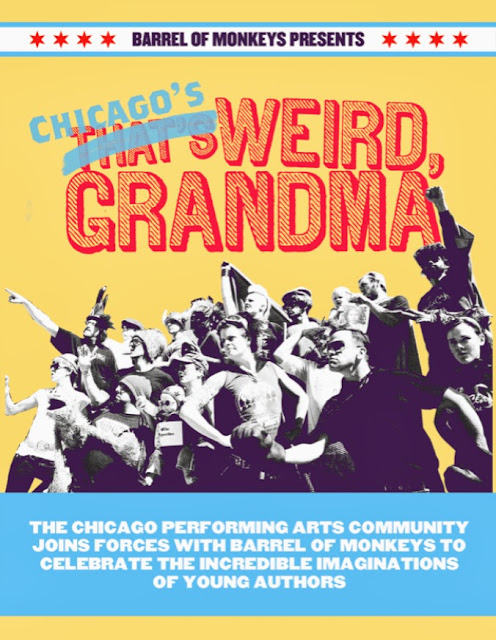 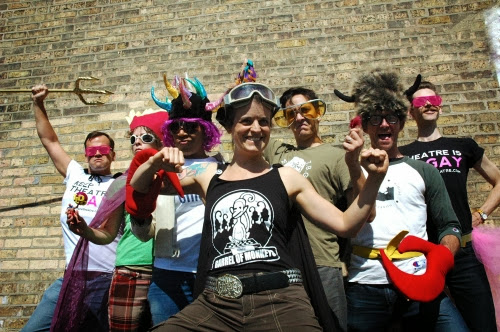 It's easy to get complacent about long running shows, and Barrel of Monkeys has been at it for over 12 years with their popular Monday night pastime, That's Weird Grandma.  Don't!  If you haven't been or haven't been lately, go already!

Check 'em out LIVE the next 6 weeks, for their annual Chicagocentric version.  Then check back with ChiIL Mama like we vote in Chi, IL... early and often.  We have an original video interview with Barrel of Monkeys coming soon.

The complete schedule of guest artists and companies for CHICAGO’S WEIRD, GRANDMA:

Just when you thought Monday nights couldn’t get any better, Barrel of Monkeys is partnering with some of Chicago’s best performing arts companies and artists for the second iteration of CHICAGO’S WEIRD, GRANDMA, directed by Artistic Director Molly Brennan, playing Mondays at 8 pm from October 28 – December 2, 2013 at the Neo-Futurist Theater, 5153 N. Ashland Ave. in Chicago.  Each guest artist or company will bring their unique talents to transform stories written by Chicago Public School students into entertaining sketches incorporating puppetry, sketch comedy, clowning, music, dance and other disciplines.

This year’s guest line-up includes: About Face Theatre, Bailiwick Chicago Theater, Jessica Hudson, The Hypocrites, Jyldo, Manual Cinema, The Neo-Futurists and Noah Ginex Puppet Company.  Each guest artist or company will choose from original stories from Barrel of Monkeys’ in-school residencies and adapt them into unique performances. Barrel of Monkeys ensemble members will round out each performance with a rotating line-up of sketches from their long-running revue, THAT’S WEIRD, GRANDMA. The weekly collection of short sketches is equally entertaining for both adults and children. The line-up changes each week by audience vote – so no two shows are ever the same.

For tickets, reservations and information visit www.barrelofmonkeys.org  or call (312) 409-1954.

The 8pm start time on a school night was cooked up for the industry peeps, because most shows run through the weekends and many actors have Monday nights off to go see That's Weird Grandma and laugh their booties off.   This winter, though, even the school kids and 9-5ers can sleep in on Sundays and still make it to the matinees.   Be there.

“Every story that you see was written by a child (uh huh). And every child was taught by the Barrel of Monkeys (well well). First we take the stories and perform them in the schools. Afterwards we share them with the world (you are the world).”

So sings the opening song of “That’s Weird, Grandma”—our Monday night public performance where we showcase the amazing talents of our student authors and our company of performers. After teaching creative writing residencies at Chicago Public Schools and working with students to generate literally thousands of creative stories, we have a gigantic repertoire of material to share with you!