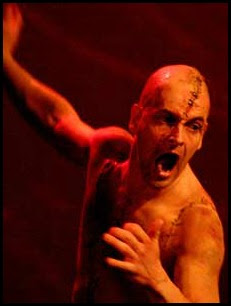 Check out our prior coverage including all the Music Box/ National Theatre show details HERE.

We were super stoked to have an advanced press sneak peek at Frankenstein (Version 2) Jonny Lee Miller as The Creature; Benedict Cumberbatch as Victor Frankenstein (2h 5m).   Pure theatre geeks will want to check out both versions, documented in this fabulous flip flop of leading roles.   We could only make the second version, but chatted up other critics who saw both and they personally preferred the second.
Coincidentally, both actors are currently playing TV versions of Sherlock Holmes, and word is both did stellar jobs alternating in the stage roles of The Creature and Victor Frankenstein.  We thoroughly enjoyed Jonny Lee Miller's Creature, who embodied both the innocence and wonder and the vengeful fury of a toddler thwarted.  The brief "making of" documentary at the beginning was also an intriguing and informative high point and a welcome prelude.
We've been doing a long form exploration via video interviews on How Creatives Parent and How Parents Create at ChiIL Mama/ChiIL Live Shows.   This was a stellar example of what we've been discovering.   Producing a new human changes you on a fundamental physical and mental level and flows through creative work in a vital way.  Miller said there was a lot of his two year old that went into his depiction, and it showed.   Even the initial entrance of The Creature was so birth like, as he emerged into this world.

By contrast, the others who saw Cumberbatch's Creature said his characterization was much more lurchy and marionette like.  The actors also studied stroke victims and those recovering from accidents, doing physical and speech therapy to regain control of their adult bodies, which also manifested in the physical characterization.   All in all, this challenging role was handled with impressive finesse.

We were also quite impressed with the set design, lighting, costumes and make up.   The choices were unique and added much to the caliber of the show as a whole.   Sometimes it's hard to capture the immediacy and intimacy of live theatre on film, but the camera work is phenomenal and the show is still compelling on screen.  We liked the steam punk costume choices for the villagers.  The mob made a symbolically and visually impressive entrance when they first met The Creature, on their noisy, industrial, gear laden contraption.

The Creature more closely resembles a man than a big green monster, but the play painfully and poignantly showcases the monstrous nature within man.   Mentally and emotionally this adaptation is more true to Shelley's book than most other Frankenstein movies and screen plays, but even more cynical and crackling with dark intensity.  The multilayered characters, excellent plot twists, and psychological and moral conundrums have us still thinking about the show days later.   Highly recommended.

We had planned to catch a press preview of One Man, Two Guvnors, too, but I ended up making an emergency trip to the vet instead, as my 110lb Akita was yelping in pain.   Fortunately it turned out to be a pinched neck nerve, so very painful but nothing lethal.   However, sometimes family....even the creatures under our care, have to take precedence.

Music Box tickets for all 3 shows are priced at $15 (advance), $18 (day of), and $20 to see both Frankenstein versions (advance sale only).  They can be purchased at the Music Box Theatre box office or online by clicking here.

The Music Box Theatre, Chicago’s year round film festival located at 3733 N. Southport Avenue, is proud to present limited engagement screenings of two National Theatre of Great Britain hits this summer:  the 2012 multiple Tony Award-nominated One Man Two Guvnors, featuring the current Broadway cast that transferred from the National, and Danny Boyle's smash hit stage production of Frankenstein, starring Jonny Lee Miller and Benedict Cumberbatch, who alternate in the roles of The Creature and Victor Frankenstein.


*Can't make the Music Box dates?   You've got one more chance at Northwestern. SAVE 20% ON THE NATIONAL THEATRE LIVE BROADCAST OF FRANKENSTEIN!June 26 & July 24, 2012 Oscar-winner Danny Boyle (127 Hours, Slumdog Millionaire) returned to the theatre to direct this visionary production with Benedict Cumberbatch and Jonny Lee Miller in alternating roles of Frankenstein and the Creature. It will return to cinemas worldwide this summer for a limited season of encore screenings, with two broadcasts at the Theater and Interpretation Center at Northwestern University: Tue, Jun 26, 7pm & Tue, Jul 24, 7pm.  The broadcasts will be held in the Ethel M. Barber Theater, 30 Arts Circle Drive, Evanston.  Mention code NUNTL and save 20% on full-price tickets (valid on advance purchase only).  (847) 491-7282 or  buy online!
Dueling Sherlocks

People on both sides of "the pond" and around the world dig Cumberbatch's Sherlock Holmes, on the BBC series of the same name.   A third series of the contemporary take on the timeless characters is slated for 2013.
This fall, CBS is set to unveil a new modern day version of Sherlock Holmes, "Elementary," set in New York and starring Jonny Lee Miller and Lucy Liu.   Check out the trailer below.
The Show On Air: Thursdays 10/9c   Starring: Jonny Lee Miller (Sherlock Holmes) Lucy Liu (Joan Watson) Aidan Quinn (Captain Tobias Gregson)   Executive Producers: Rob Doherty Sarah Timberman Carl Beverly Michael Cuesta   In a modern-day take on Sherlock Holmes, the iconic detective is taking on New York. Just out of rehab, he's been assigned to live with his worst nightmare-sober coach, Dr. Joan Watson. Holmes's unsurpassed skills of deduction and Watson's medical expertise come together to create a dream team for solving the NYPD's most impossible cases.