We dig Guinness World Record attempts.   We met someone in the record books for walking on hot coals, and it was one of the first things out of his mouth when meeting new people.   My husband, Dug, did a TLC shoot for My Strange Addiction with the Guinness record holder for riding a stationary bike the longest.   It's human, competitive nature to push the boundaries and so much fun to read about the quirky ways people go about gaining their 15 minutes of fame.

Last weekend, 6 Corners BBQ Fest made an attempt at breaking the record for most people wearing sunglasses in the dark, in the classic Portage Movie Theatre (with Corey "I wear my sunglasses at night" Hart.


PopCap Games has just announced another Guinness World Record attempt with an awesome philanthropic twist, and you can get in on the action and donate, too.

Two women from different continents aim to play 30 straight hours of Solitaire Blitz, their favorite digital card game to raise funds for charity:  water.   Charity:  water works to provide the critical human need of safe drinking water to more than 800 million people in developing nations.
Laura Rich and Kathleen Henkel  will play a multicultural, transatlantic, Solitaire Blitz in London and New York respectively.   What are they in for? “Longest video games marathon playing a card game”.    They plan to play 30 straight hours from June 26-27.

As if we needed another reason to adore PopCap--creative geniuses behind Plants Vs. Zombies, Bejeweled, Bookworm, and Peggle...

Along with its donation, the game developer is encouraging interested parties to make their own pledges through the Solitaire Blitz app on Facebook. All you have to do is check out “Solitaire Blitz” , add the app to your Facebook account, and click on the “Pledge” button to make a donation. You can donate as little as $0.093 per hour; about $2.78 for the full marathon.
PopCap ensures that 100 percent of all proceeds will go to charity:  water

Mother of 3 and student doing a National Diploma course in IT, 31-year-old Laura Rich of South Wales is both a hardcore and casual gamer with almost 20 years experience playing digital solitaire. Her love of the fast-paced Solitaire Blitz and support of charity: water make her confident she'll reach the 30 hour goal.

Retired substance abuse supervisor Kathleen Henkel of Oakland, NJ is known as Hadja by her 'second family' in Guinea, West Africa where she spends much of the year and recently helped build a well. She has played solitaire all her life and is very motivated to set the world record, as every hour means more funds for charity: water. 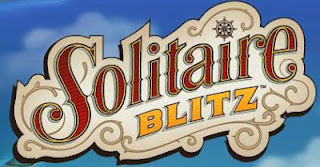