Broadway in Chicago: Rock of Ages Opens In Chi-Town

The orginal Broadway cast of the hit musical ROCK OF AGES, featuring Constantine Maroulis, perform a medley from the show

Check out our past review right here.

ChiIL Live Shows will be there this Wed night and we'll have a full review shortly.

In the mean time:
here's our triple patron interviews from Rock of Ages' 2010 Chi-Town run.

Hair band devotees rejoice: The anthems of the '80s are back. The new musical features the hits of Journey, Bon Jovi, Styx, REO Speedwagon, Pat Benatar and many more.

In 1987 on the Sunset Strip, a small-town girl met a big-city rocker, and in L.A.'s most famous rock club, they fell in love to the greatest songs of the 80s. This arena-rock love story is told through the mind-blowing hits of Journey, Bon Jovi, Poison and many more.

Rock Of Ages may be inappropriate for children aged 7 and under, according to Chicago-Theater.com.

(*ChiIL Mama's note:  Broadway in Chicago posted a PG13ish warning that some of the dances and costumes may be inappropriate for children.   There are "stripper" characters, but nothing more risque than a bra and fishnets.   I did see a few younger children in full 80's rock star dress, and they were having a blast.   Still, parents who are uncomfortable with simulated lap dances and semi-mature sexual themes might want to make this a parents night out.)

Last time we made it a parents night out, but this time around Du-Jay (11) and Sagezilla (9) will be rockin' out with ChiIL Mama.

2 hours and 20 minutes with one 10 minute intermission. 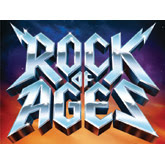 The worldwide party musical ROCK OF AGES features a mix of 28 rockin' 80's tunes including DON'T STOP BELIEVIN', WE BUILT THIS CITY, THE FINAL COUNTDOWN, WANTED DEAD OR ALIVE, HERE I GO AGAIN, CAN'T FIGHT THIS FEELING and I WANT TO KNOW WHAT LOVE IS.

In 1987 on the Sunset Strip, a small town girl met a big city rocker and in LA's most famous rock club, they fell in love to the greatest songs of the 80's. It's five time 2009 Tony® nominee ROCK OF AGES, an arena-rock love story told through the mind blowing, face-melting hits of JOURNEY, NIGHT RANGER, STYX, REO SPEEDWAGON, PAT BENATAR, TWISTED SISTER, POISON, ASIA, WHITESNAKE and many more. Don't miss this awesomely good time about dreaming big, playing loud and partying on!
"Impossible to resist!" - Charles Isherwood, New York Times "Rock and comedy in perfect proportion!" - David Cote, Time Out

Posted by Bonnie Kenaz-Mara at 7:50 PM