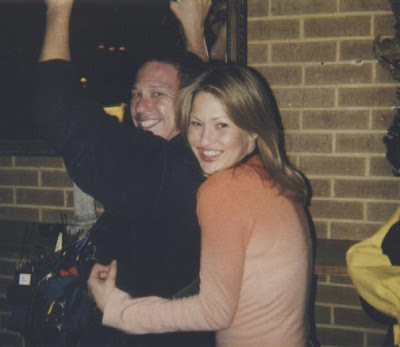 My husband sticks his hands down celebs shirts for a living.  I shoot rock stars and am in and out of tour buses and back stage green rooms all the time.   Luckily neither of us is the jealous type, and sometimes "it's not what it looks like" really does apply.   It's a cool job sometimes....but it's a job nonetheless.   Sometimes there is a mic or power pack on the end of those hands in the waistband or bra, and the blonde getting off the tour bus really is conducting interviews.

All the musicians I've met have been completely professional and the line between groupie and working press has never come into question.  It's the guy fans who smirk knowingly at me and quip "What do you have to do to get a photo pass, eh?!"   Hmmmm.   Maybe you have to be a working member of the press or a solid photographer/videographer/writer.   Didn't hear them ask any of the male shooters in the pit next to me....


Dug says the same thing about putting mics on TV and film celebs.  They're the pros....they're used to it and they "get it".  It's the regular people who freak a little at the invasion of privacy.  Fortunately I'm not weirded out that my husband's had his hands on everyone from Julia Roberts to Giuliana Rancic.

Amazingly enough, in 3 days, Dug and I will have been married for 12 years, and we've been monogamously together since 1997.  With the vast majority of our friends divorced, that's an accomplishment.  This August 18th, my parents are celebrating their 50th Anniversary together!

So, in honor of love--long lasting, newly dating, BFF, and whatever configuration works for you....we've got FIVE pairs of tickets for a date night out to see film icon, Kevin Smith (Clerks, Chasing Amy, Dogma, Mallrats).  He will treat fans to a special evening and Q&A, a week from today, Thursday, June 14, at 8pm at The Chicago Theatre, 175 N. State Street.   His appearance is part of the

We adore Kevin Smith's prolific and quirky style, and we aren't afraid to admit to having adult friends who collect Jay and Silent Bob dolls and other memorabilia.   We dig his films and his genre crossing creativity.   This is sure to be an amusing night to remember and we're stoked to be able to give away 10 tickets to you...our readers.

Here's his official bio from the TBS Just for Laughs Site:
There's "prolific," and then there's Kevin Smith, who in addition to a storied film career and being a NY Times Best Selling Author and reality TV star, hosts the weekly, wildly popular podcast SModcast alongside buddy Scott Mosier. He has spent nearly 20 years as a writer/director making Clerks, Mallrats, Chasing Amy, Dogma, Jay & Silent Bob Strike Back, Zack and Miri Make a Porno, Cop Out, Red State, and a producing several other films, all receiving acclaim and praise. Plus, he's released three DVDs of Q&A sessions, and several cable specials, including the EPIX original Kevin Smith: Too Fat For 40. He's published two books full of essays and blog postings (Silent Bob Speaks and the best-selling My Boring-Ass Life), as well as Shooting the Shit with Kevin Smith - a collection of the best material from SModcast. One of the first filmmakers to venture into cyberspace, Smith has legions of fans who follow his podcasting and comic book-writing; and hey, maybe they even visit his comic book store Jay and Silent Bob's Secret Stash in Red Bank, New Jersey.


...Adams appeared in Mallrats, written and directed by Kevin Smith. The two started dating during the film's post-production, and their relationship provided the inspiration for Smith's next movie.

Meanwhile, in 1996, while Smith was finalizing the script for Chasing Amy, she was cast for a role in the slapstick comedy Bio-Dome, which was directed by Jason Bloom. Adams played the role of Monique, girlfriend to Bud Macintosh (Pauly Shore).

In 1997's Chasing Amy, Smith cast Adams in the lead role of Alyssa Jones, a lesbian who falls in love with a man, played by Ben Affleck. Later, Smith would describe Chasing Amy as a "sort of penance/valentine" and a "thank-you homage" to Adams.[3] In addition to her acting work on the film, Adams wrote and performed the song "Alive" for the movie's soundtrack.

Adams' performance in Chasing Amy earned her both the 1997 Chicago Film Critics Award and Las Vegas Film Critics Society Award for Most Promising Actress, and a Golden Globe nomination for Best Actress-Motion Picture Musical or Comedy. From there, Adams was originally slated to play the female lead in Smith's next film, 1999's Dogma, but Linda Fiorentino ultimately got the part.[4] However, she would later make brief appearances in two other Smith projects: the 2001 film Jay and Silent Bob Strike Back, and the 2004 animated short Clerks: The Lost Scene, featured on the Clerks X DVD. In both of these appearances, Adams reprised the role of Alyssa Jones.

**My husband and the Insomniac crew ran into Joey in her home town of little rock, while shooting with Dave Attell.   Dug can also be seen on screen in that Insomniac episode, sticking a mic down the shirt of Connie Hamzy  AKA:   Sweet Connie of Little Rock (who BTW didn't just interview & shoot bands, but was in fact a groupie who claimed to have sex with numerous bands' members).    Attell burst in on my husband and Connie in the back room. while Dug was placing the mic and teasingly did an improv bit about...."What are you doing?    You're just the sound guy.   You know the order.   She does me, then the cameraman, then you."    When it aired later, he promised me it was only a gag.......

Hamzy is mentioned in Grand Funk Railroad's song "We're an American Band" ("Sweet, sweet Connie, doin' her act/ She had the whole show and that's a natural fact.")Wikipedia

Enter below for your chance to win!

*Wait for Rafflecopter to load up right here (if you've gone through RSS feed or are scrolling down the blog and don't see it, click on the actual page title and it should pop right up).

Please enter with the full legal name you want to appear on the tickets at the box office if you win.  Enter through midnight 6/12 and we'll announce our 5 winners on 6/13.  We'll contact winners by e-mail, but check here as well (sucks to win and find out after the fact--thank you spam filter).  Your tickets will be held at the Chicago Theatre box office.

Enter like we vote in Chi, IL...early and often.   Winning rocks!

a Rafflecopter giveaway
Posted by Bonnie Kenaz-Mara at 2:22 PM