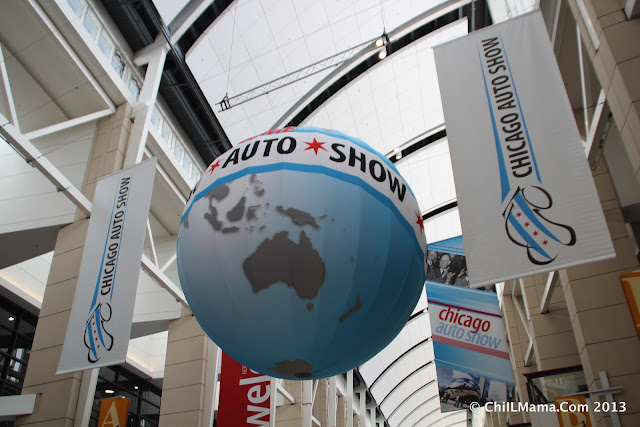 Come on down to McCormick Place and check out THE largest indoor auto show in North America!

Speed Racer was my first crush.  So, it was fun to meet real life racers, Foust and Deegan with Ford.  They also provided hot breakfast sandwiches and coffee.  Can't go wrong feeding the press!   We recently video taped a Ford Fusion ride along for Drowsey Driver Awareness Week and have some week long test drives in the works.   Check out ChiIL Mama's video by clicking the link above. 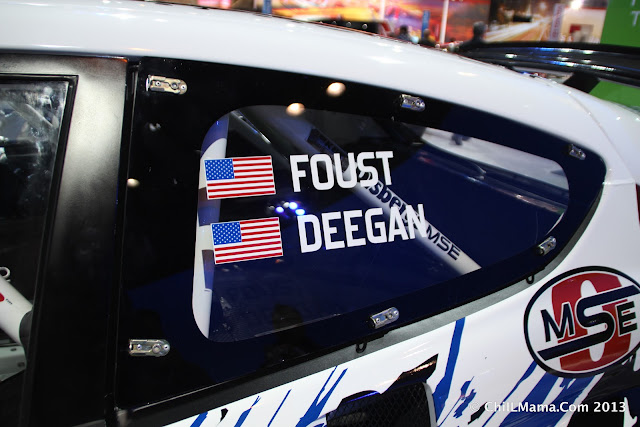 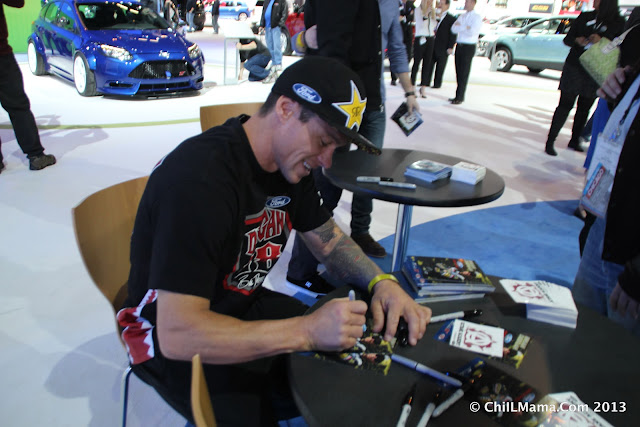 One of the highlights of the day was certainly Samaritan's Feet, Buick's philanthropic event that began the morning with a feel good-do good start that can and does change lives. 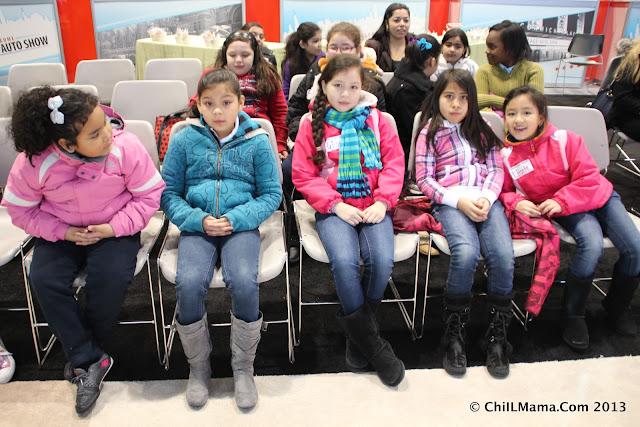 We'll have an entire Samaritan's Feet feature including video interviews with Tamera Young of the WNBA's Chicago Sky and others, and our full set of stills up shortly. 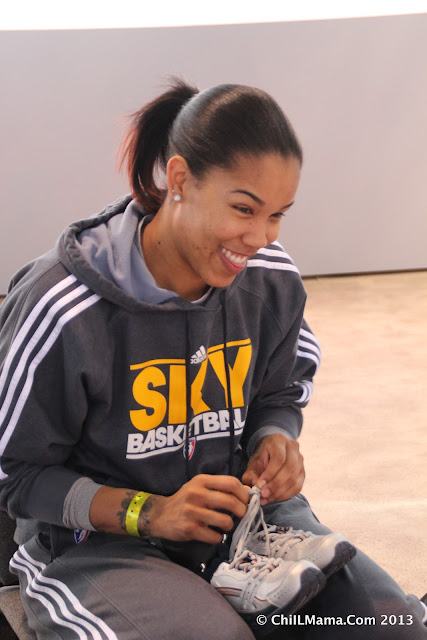 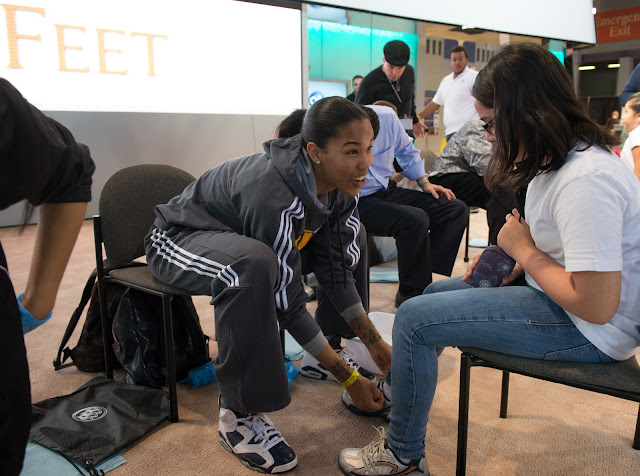 Tamera Young of the WNBA's Chicago Sky laces up a new pair of shoes for Jasmine, after washing her feet Friday, February 8, 2013 at the Chicago Auto Show in Chicago, Illinois. Young was participating in an event sponsored by Buick and Samaritan's Feet charity to provide new shoes to 300 young women from Girls in the Game, a Chicago-area organization that promotes sports and fitness among female youth in urban areas. (Photo by Steve Fecht for Buick) 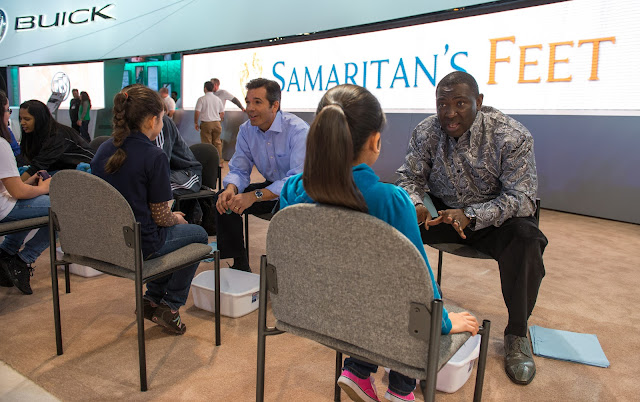 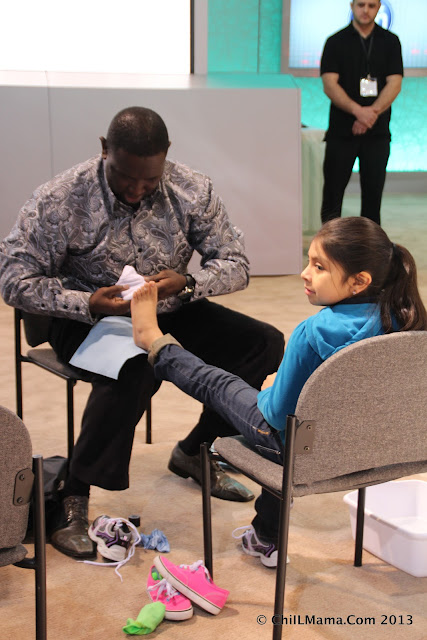 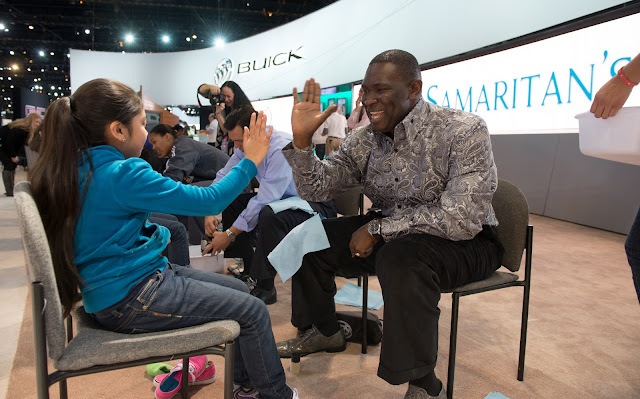 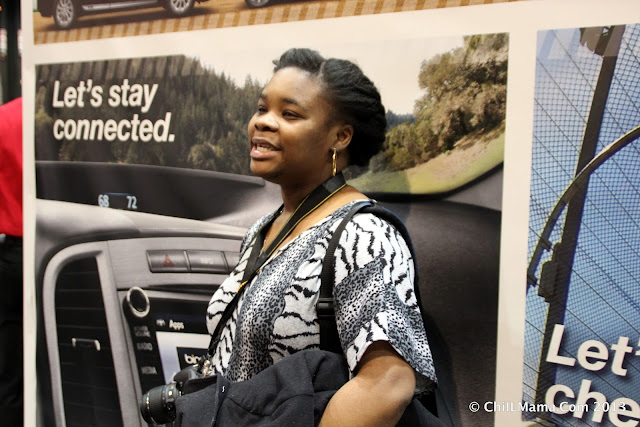 It was fun to connect with fellow blogger & mama to 4 (including twins!), Natasha Nicholes @hfofnicholes, at Toyota.    She looks so natural & at home with their back drop, they ought to hire her as a model!


We also took a test drive in a new 2014 RAV4, to see how it compares to our original 1996 RAV4--the first year they ever made them.  Yes, these cars have longevity, dependability and staying power!   On the new RAV4's they've tucked the spare tire under, and eliminated the 3rd row seating option, and the interior is roomier.   We also dug Toyota's custom Bears paint job!   Follow their hashtag #letsgoplaces. 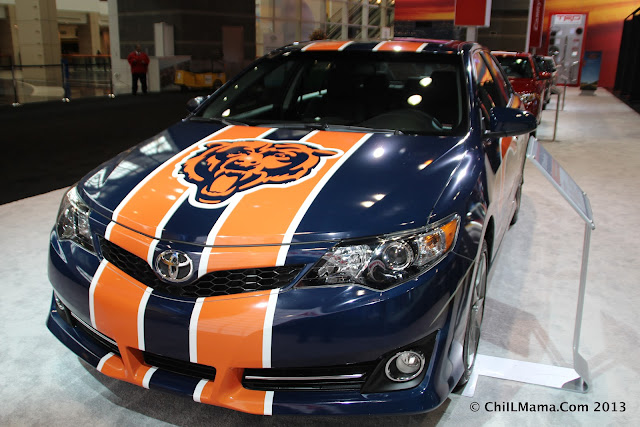 TO DO AT THE CHICAGO AUTO SHOW:   Take a Toyota ride along--it's worth the wait.   You'll leave with a nice ice scraper/snow brush--useful swag to be sure!   You can also record a video for their web site and/or green screen yourself into a photo somewhere fun.   I picked the red carpet and paparazzi.  Toyota's indoor track is a hoot, with personalized messages that pop up along the route! 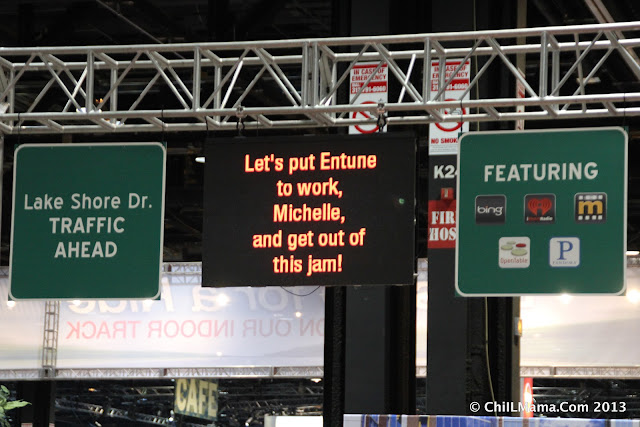 TO DO AT THE CHICAGO AUTO SHOW:   GM is rockin' the interactive exhibits in their space from Chevy to Cadillac. 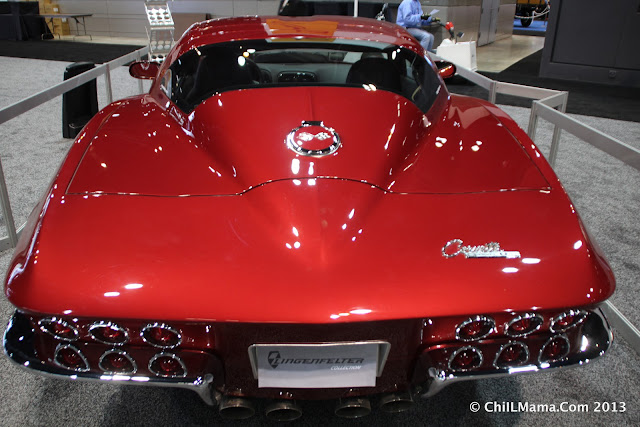 Don't miss the outdoor Cadillac test drives, down two floors, and the classic cars and Chevy Fun Zone, including Blackhawks fun--main level but hiding across the Auto Show from the GM hub. 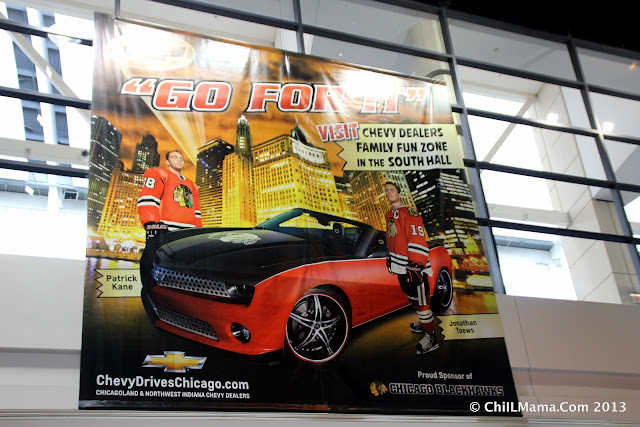 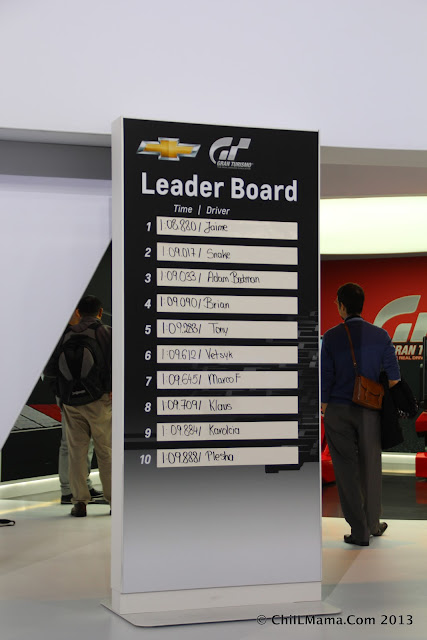 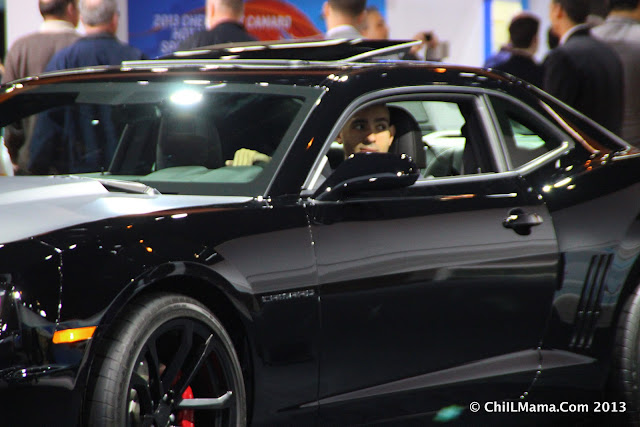 There are loads of video game style drives to try out, complete with a high score board, a Hot Wheels launcher track where you can win a special edition Chicago Auto Show 2013 cobalt blue Camaro, and even a custom button bar where you can express yourself DIY style. 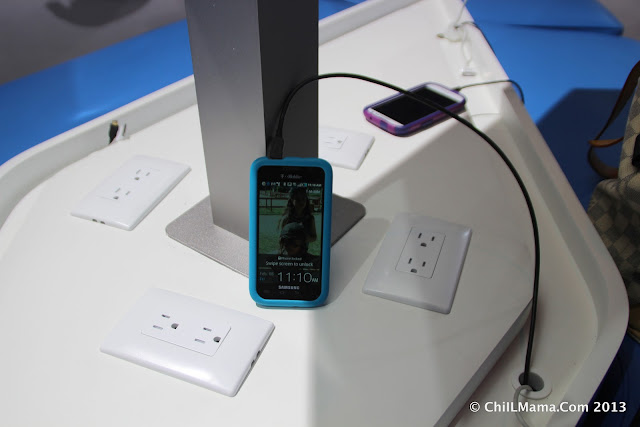 Smartphone dying?   ChiIL out.  It's not a problem.  Chevy's got you covered.   They have outlets if you're organized and brought your own charger, and even a variety of Smartphone cords if you didn't! 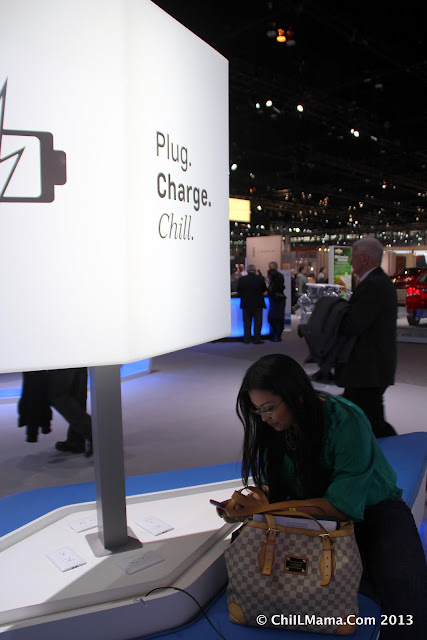 Friend and fellow blogger +Johanna Cook  @mommacuisine takes a few minutes to ChiIL out with +Bonnie Kenaz-Mara  @chiILMama at one of Chevy's FREE Chill Charging Stations.

We closed out the day with a fabulous panel on Women in Social Media and marketing to women, arranged by my friends and colleagues at Chicagonista, MJ Tam and Beth Rosen. 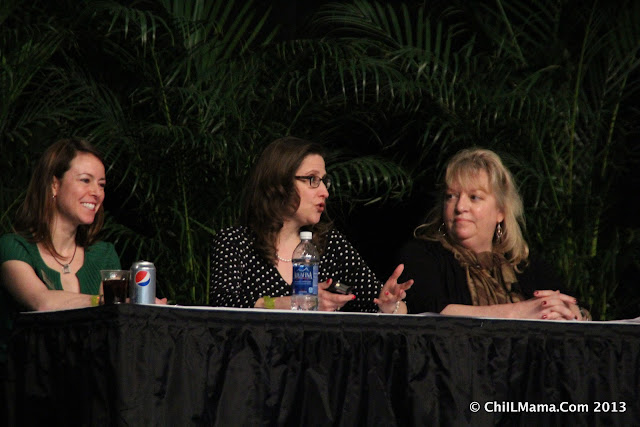 It was a pleasure to hear GM's inimitable Mary Henige, Director, Social & Digital Communications.   This gregarious mother of two began the day washing children's feet and mentoring, and ended with wise words as a panel speaker and influencer. 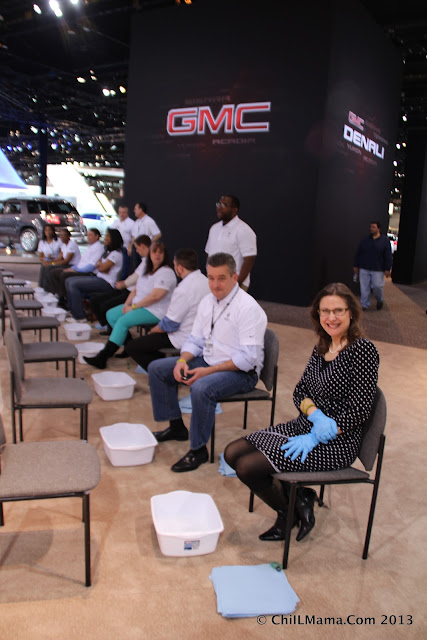 We'll have our Samaritan's Feet video interview with Mary up shortly.   We had an enjoyable evening of conversation the night before, as we shared a table at a GM dinner at Chicago Firehouse Restaurant

The Chicago Auto Show is open daily through February 18th.   Check out their main site to buy tickets, check out daily special events, and more. 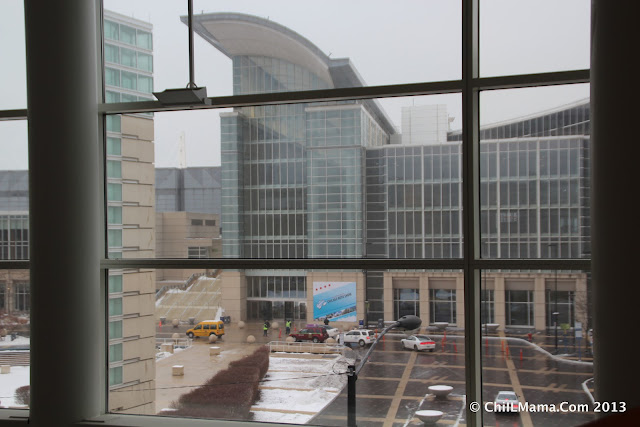 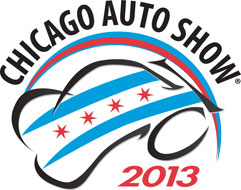