ACT OUT OPENING: Teddy Ferrara at The Goodman & Other Desert Cities Now Playing


In conjunction with the production, Goodman Theatre hosts its first-ever student press conference including cast members from Teddy Ferrara on February 7 from 5:30 – 6:30pm. Chicagoland college and high school students are invited to join participants of the Goodman’s Cindy Bandle Young Critics program (CBYC) in this unique opportunity to interview the cast. To make arrangements, student journalists should call 312.443.5152 or email Press@GoodmanTheatre.org.

Students can also take advantage of “10Tix” tickets – $10 tickets exclusively for students, now available for advance purchase – at GoodmanTheatre.org using the promo “10Tix” or at the box office (170 N. Dearborn). Previously, 10Tix were only available day-of show. A valid Student ID must be presented upon pickup, and limit four tickets per student. All tickets are subject to availability and handling fees apply.

"I was teaching undergraduates just as I was beginning to work on Teddy Ferrara and really observing them and measuring my own experiences against that,” says playwright Christopher Shinn. “It’s an entirely different social world today as mediated through media and technology, and it’s rare to see college students represented truthfully. I’ll know I have achieved this if college-aged students respond to this play.” 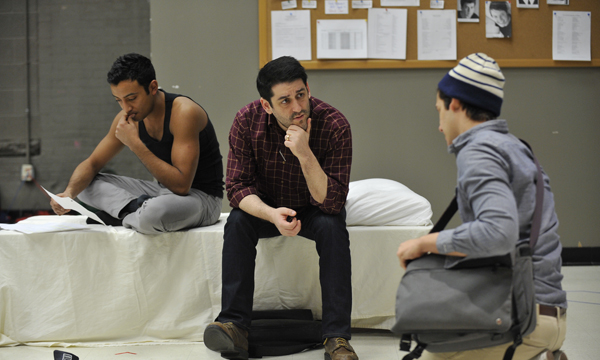 Artist Encounter
TONIGHT--Wednesday, February 6 | Polk Rehearsal Room 6pm, FREE for Subscribers, Donors and students with ID; $5 for the general public (reservations required) Join us for an intimate conversation with Teddy Ferrara director Evan Cabnet before the 7:30pm performance that evening. Moderated by Adam Belcuore. To reserve tickets, call the box office at 312.443.3800.

PlayBack
Following each Wednesday performance of Teddy Ferrara, audiences are invited to attend free post-show discussions with members of the Goodman’s artistic staff.

Teddy Ferrara takes place during Gabe's senior year of college. His future looks bright: he runs the Queer Students Group, he finally has a single room and he recently started dating a great guy. But when a campus tragedy occurs that makes national headlines it ignites a firestorm and throws Gabe's world into disorder. When new evidence surfaces, Gabe discovers that the events surrounding the tragedy aren’t as straightforward as they seem, and he is forced to question popular assumptions—and his own life’s contradictions.


January 12- February 17, 2013 In the Albert Approximate running time: 2 hours and 15 minutes with one intermission


A family is pushed to the brink in Jon Robin Baitz’s scintillating new drama, dubbed “the best new play on Broadway” by The New York Times.
When Brooke Wyeth arrives at her parents’ Palm Springs mansion on Christmas Eve with the manuscript of her tell-all memoir in tow she unearths a devastating family secret—throwing her parents into a panic that threatens to rip the clan apart. With biting wit and razor-sharp insight, Other Desert Cities “has the appeal of a Broadway hit from another age” (The New York Times).

About Goodman Theatre
The Goodman’s 2012/2013 Season features 11 productions on its two stages—six in the 856-seat Albert Theatre and three in the 400-seat flexible Owen Theatre, plus a Latino Theatre Festival that includes two additional productions. Still to come in the 2012/2013 Season are:

Other Desert Cities by Jon Robin Baitz, directed by Henry Wishcamper (now through February 17, 2013); Teddy Ferrara by Christopher Shinn, directed by Evan Cabnet (February 2 – March 3, 2013 in the Owen);
a Latino Theatre Festival in the Owen, including Cuba’s Teatro Buendía’s production of Pedro Páramo by Raquel Carrió
Co-directed by Flora Lautén and Henry Godinez and produced in association with the Museum of Contemporary Art Chicago (March 22 – March 31); The Happiest Song Plays Last by Quiara Alegría Hudes, directed by Edward Torres (April 13 – May 12, 2013) and Albany Park Theater Project’s production of Home/Land, written collectively by the Albany Park Theater Project teen ensemble and directed collectively by the Albany Park Theater Project artistic staff (June 20 – June 30, 2013); By the Way, Meet Vera Stark by Lynn Nottage, directed Chuck Smith (April 27 – June 2, 2013 in the Albert); and The Jungle Book, a new musical based on the Disney animated film and the stories of Rudyard Kipling, adapted and directed by Mary Zimmerman (June 21 – July 28, 2013 in the Albert).

Goodman Theatre, “the leading regional theater in the nation’s most important theater city” (Time), is a major cultural, educational and economic pillar in Chicago, generating nearly $250 million in economic impact over the past decade in its state-of-the-art two-theater complex on North Dearborn Street.
Founded in 1925 and currently under the leadership of Artistic Director Robert Falls, “Chicago’s most essential director” (Chicago Tribune), and Executive Director Roche Schulfer, Chicago’s oldest and largest not-for-profit resident theater has welcomed nearly two million patrons to productions and events—including 10 festivals celebrating playwrights such as David Mamet, August Wilson and Horton Foote, as well as the biennial Latino Theatre Festival—and served legions of students through its Education and Community Engagement programs (including the FREE Student Subscription Series and other interactive programs).

The Goodman has earned more than 90 awards for hundreds of productions, including the Pulitzer Prize for Ruined by Lynn Nottage—one of 25 new work Goodman commissions in the last decade. American Airlines is the Exclusive Airline of Goodman Theatre. Ruth Ann M. Gillis is Chairman of the Board of Trustees, Sherry John is President of Women’s Board and Lauren Blair is President of the Scenemakers Board, the Goodman’s young professionals auxiliary group.

Click here to order tickets and find further show details for both productions.
Posted by Bonnie Kenaz-Mara at 10:31 AM