FREE Tickets To Advanced Screening of JACK THE GIANT SLAYER

ChiIL out with ChiIL Mama at an advanced screening for:

*Note that seating is first-come, first-served and not guaranteed so please arrive about a half hour early.


Thanks to Gofobo, ChiIL Mama's readers can get a sneak peek at an exclusive advanced screening of JACK THE GIANT SLAYER!   Click this link to download up to 4 FREE tickets per family (1st 100 ChiIL Mama Readers).

Click here to check out their main site, for free video games, fun facts and more.

We can't wait to check it out and we're super stoked to be able to bring a bunch of our friends & loyal readers along for the ride!   We'll have a full review up shortly.

We’re also getting some pretty cool promotional materials for this release—JACK THE GIANT SLAYER-themed t-shirts, hats, bean-shaped ear buds, little bags of jelly beans, temporary tattoos, etc. and we'll be at Beat Kitchen next weekend, passing them out at the Concerts for Kids Series we sponsor!   We'll also be handing out goodies at CircEsteem Circus Arts School! 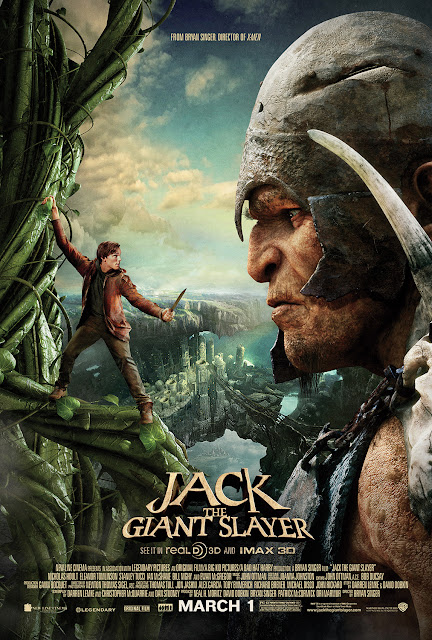 An age-old war is reignited when a young farmhand unwittingly opens a gateway between our world and a fearsome race of giants.

Unleashed on the Earth for the first time in centuries, the giants strive to reclaim the land they once lost, forcing the young man, Jack (Nicholas Hoult), into the battle of his life to stop them.  Fighting for a kingdom and its people, and the love of a brave princess, he comes face to face with the unstoppable warriors he thought only existed in legend… and gets the chance to become a legend himself.

A New Line Cinema presentation, in association with Legendary Pictures, “Jack the Giant Slayer” opens March 1, 2013 and will be distributed by Warner Bros. Pictures, a Warner Bros. Entertainment Company.

Disclosure:  Thanks to Gofobo and Warner Bros. for providing us with review and giveaway tickets and cool promotional giveaway swag.  You rock!   All opinions are our own.
Posted by Bonnie Kenaz-Mara at 9:21 AM