Move It-Move It With Your Favorite Characters from Madagascar, March 16-20th! 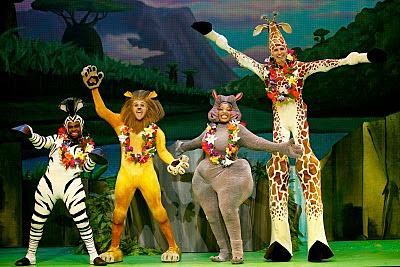 DREAMWORKS THEATRICALS AND BROADWAY ACROSS AMERICA BRING “MADAGASCAR LIVE” TO CHICAGOLAND FROM MARCH 16 - 20
ChiIL Mama will have a full review for you after opening night.   We're so jazzed to move it move it out to Rosemont Theater for what's sure to be a booty shakin' good time.
DreamWorks Theatrical’s First-Ever Live Family Touring Show Plays Rosemont Theatre for Nine Shows
DreamWorks Theatricals and Broadway Across America present “MADAGASCAR LIVE,” DreamWorks Theatricals’ first-ever live family touring show. The production will play at the Rosemont Theatre, 5400 N. River Rd., Rosemont, Ill., from Wednesday, March 16 to Sunday, March 20, 2011 for nine performances.
“MADAGASCAR LIVE” is expected to visit more than 70 cities across the United States beginning in January 2011. The brand new stage show aimed at family audiences stars the cast of popular characters from the beloved “Madagascar” film series, including Alex the Lion, Marty the Zebra, Melman the Giraffe, Gloria the Hippo and members of the madcap Madagascar crew, King Julien and the crafty Penguins.
Tickets are currently on sale. “MADAGASCAR LIVE” tickets can be purchased online at rosemonttheatre.com, ticketmaster.com or by calling Ticketmaster at 800-745-3000. Tickets are also available for purchase at the Rosemont Theatre box office and at all Ticketmaster outlets.  For groups of 15 or more please call GroupTix at 773.327.3778.  For more information, visit madlive.com.  Regular tickets range in price from $22 to $60 (ticket price includes a $3 facility fee). VIP tickets are available for $118, which includes admission to the preshow party and premier seating.
Performance schedule is as follows:
Wednesday, March 16 at 7 p.m. Opening Night
Thursday, March 17 at 7 p.m.
Friday, March 18 at 7 p.m.
Saturday, March 19 at 11 a.m., 2 p.m., and 5 p.m.
Sunday, March 20 at 11 a.m., 2 p.m. and 5 p.m.
Widely successful across audiences of all ages, the original story will be brought to new life in the 90-minute stage show that will transport audience members from the Central Park Zoo to the wild of Madagascar. In addition to featuring everyone’s favorite characters, “MADAGASCAR LIVE” takes the audience on an action packed adventure with imaginative set, costume and puppet design, magnificent singing and dancing and the hit song “Move It, Move” for an experience the entire family will enjoy. 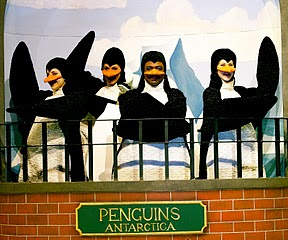 Meet the Creative Team
“MADAGASCAR LIVE” is being directed by Gip Hoppe, director of “Dora the Explorer Live” who has worked with Broadway Across America and Nickelodean on other family friendly live touring productions including “Blue’s Clues Live,” “Dora’s Pirate Adventure” and “Go, Diego, Go Live!” Hoppe also wrote and directed the Broadway play “Jackie: An American Life” and is a founding member and co-artistic director of the Wellfleet Harbor Actor’s Theatre.
The show was written by Kevin Del Aguila, who received a Drama Desk Award nomination as book writer of the Off-Broadway hit “Alter Boyz” and has also written the musical adaptations of the children’s books “Lilly’s Big Day and “Click, Clack, Moo: Cows That Type.”
Joel Someillan and George Noriega are the show’s composers and lyricists. Someillan and Noriega have worked with several popular artists including Gloria Estefan, Ricky Martin and Mandy Moore and between them have amassed a collection of gold and platinum records and won multiple Grammys. They have also composed music for Nickelodoen’s “Dora the Explorer” and “Go, Diego, Go” television shows and the “Go, Diego, Go Live!” touring stage show.
Tony award-winner David Gallo serves as the show’s Scenic Designer. Gallo’s Broadway credits include “Memphis,” “Xanadu,” “The Drowsy Chaperone,” “Ma Rainey’s Black Bottom” and “Throughly Modern Millie,” and whose touring show credits include “Dora the Explorer Live” and “Blue’s Clues Live.”
The costumes are designed by Tony award-winning Gregg Barnes, whose Broadway credits include “Legally Blonde,” “Flower Drum Song,” “The Drowsy Chaperone,” “Dirty Rotten Scoundrels” and whose touring show credits include ‘Disney On Ice – Princess Classics,” “Radio City Christmas Spectacular,” “Winnie the Pooh” and Madison Square Garden’s “The Wizard of Oz.”
For more information about “MADAGASCAR LIVE,” visit www.madlive.com. Find “MADAGASCAR LIVE” on Facebook by visiting this Facebook page.
About DreamWorks Theatricals
DreamWorks Animation SKG, Inc. (DWA) established DreamWorks Theatricals to produce stage productions based on its films and other original adapted works. Currently planned projects include an arena spectacular based on “How To Train Your Dragon” produced in association with Global Creatures as well as an arena show based on Kung Fu Panda produced in association with Franco Dragon Entertainment.  DreamWorks Theatricals is currently represented by the North American tour of “Shrek The Musical” as well as the upcoming London production set to open in May of 2011 at the Theatre Royal Drury Lane.  DWA is devoted to producing high quality family entertainment though the use of computer-generated animation. Jeffrey Katzenberg currently serves as DWA’s CEO and is on the Board of Directors and was a co-founder of DreamWorks Studios in 1994. The President of DreamWorks Theatricals is Bill Damaschke.
About Broadway Across America
Broadway Across America (Producer) is owned and operated by British theatre producer John Gore (CEO) and entertainment industry veteran Thomas B. McGrath (Chairman). Broadway Across America presents first-class touring musicals and plays across 40 North American cities. Under the supervision of Beth Williams (COO & Head of Production), Broadway Across America is also dedicated to the development and production of new and diverse theatre.  Current productions include “Promises, Promises,” “Million Dollar Quartet,” “La Cage Aux Folles,” “West Side Story,” “Memphis; The Scottsboro Boys,” the West End production of “Flashdance” and the upcoming revival of “How to Succeed in Business Without Really Trying.” Current touring productions include “Dreamgirls” and Nickelodeon's “Storytime Live.” Please visit BroadwayAcrossAmerica.com.
Posted by Bonnie Kenaz-Mara at 4:08 PM