What do drag queens and Tupperware have in common? 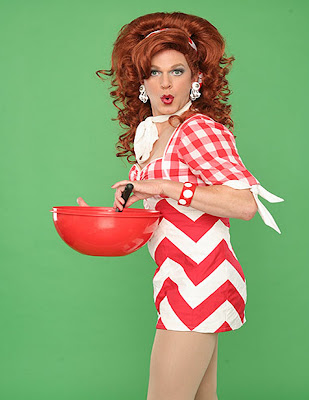 Both are great for entertaining, colorfully conceal their goods, and have a staring roll in Dixie's Tupperware Party.


This raunchy, real Tupperware Party has come to The Royal George Theatre Cabaret for a limited 8 week run, and we highly recommend you check it out.   I haven't laughed this hard and long in a show for years.   My sides hurt.    Dixie's wild wit and quick improv shine in this fast talking, plastic crap hawking, one woman show.


Dixie is a consummate hostess, offering mints and schmoozing with her guests in the intimate theatre space that serves as her expanded, double wide living room.   She has an entire wardrobe of mini skirt, table cloth couture.   Break out your best trailer park chic, and dress up for this one, for the full effect.


Everyone has name tags, ostensibly for the raffle prizes, but this gives Dixie a wicked little advantage of being able to pick on people by name.   This highly interactive, audience participation piece pulls everyone in, whether they like it or not.   Before you know it, she'll have you singing "I've got that Tupper feeling down in my heart" just like Vacation Bible School.


I was most amused and impressed by Dixie's mastery of naive, Southern, trailer trash vocabulary.    She is convincingly geographically challenged and stumbles over the big word in her pitch with a charming lack of finesse.   She rocks the funny scripted bits, with great comedic timing and charisma, but really shines with the off the cuff stuff.


Beware if it's your birthday.   Our resident birthday girl was tagged "the lesbian", early on, for looking at Dixie's legs, in a gender bender worthy of Shakespeare.   Then the poor girl was playfully teased and referred to throughout the show.


If your number gets picked in the lottery, you're in for a ride.    After you have your mortifyingly fun 15 minutes of fame on the stage, you'll go home with a little Tupperware treat.   Just don't be surprised if you're asked to demonstrate your tea bagging technique on a tiny toddler toy replica or race another team to get your balls in order.


As for the raunchy part, if you're easily offended or a pc police type, you might want to seek your Tupperware fix at a more vanilla, suburban party.    Dixie explains Tupperware in a wine chugging, sex loving, no holds barred way that will have you laughing too hard to fill out an order form.   She extols the virtues of Tupperware for drinking and driving, explains screwing, and explores creative, new uses hookers might find for the squeeze and squirt device with the decorator tips.


The real part is a bit more complex.   Yes, this is a "real" Tupperware party, complete with order forms and real product.    But the real elements go beyond so called "plastic crap".    Dixie also shares a poignant monologue about spousal abuse and gripes about the challenges of being a single mother to 3 young children, Wynona, Dwayne, and Absorbine, Jr.   In the style of 70's consciousness raising groups, Dixie uses her 1950's reputation Tupperware parties for a startlingly feminist rallying cry.


Dixie enlightens everyone on Brownie Wise, single Mama and genius behind the concept of the Tupperware party.    She's all but forgotten, since she didn't "slap her name all over everything like the inventor, Tupper."    Yet, Dixie is reviving the Brownie Wise story, and using it as a rallying cry.   Don't let other people tell you what you can't do, is the heartfelt message beyond the bowls.    Dixie proves that if a single Mama with 3 little dependents, a drinking problem, and a prison record can enjoy economic independence, and rise to the upper echelons of the Tupperware sales empire, then anyone can go for their dreams.

Dixie's tupperware party stars Dixie Longate and is written by Kris Andersson and directed by Patrick Richwood.
In 2008, Dixie received a prestigious Drama Desk Award nomination for Outstanding Solo Performance.    ChiIL Mama will be interviewing Dixie in early April, so comment if you have any questions for this scrappy, hilarious, entrepreneur.   The show runs through May 15th, as part of a 20-city national tour, so get your tickets today. 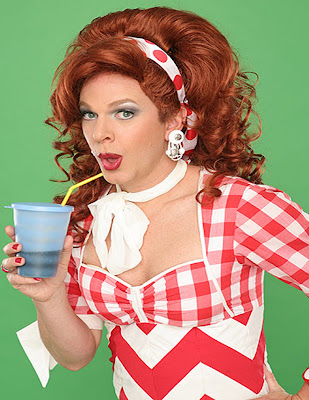