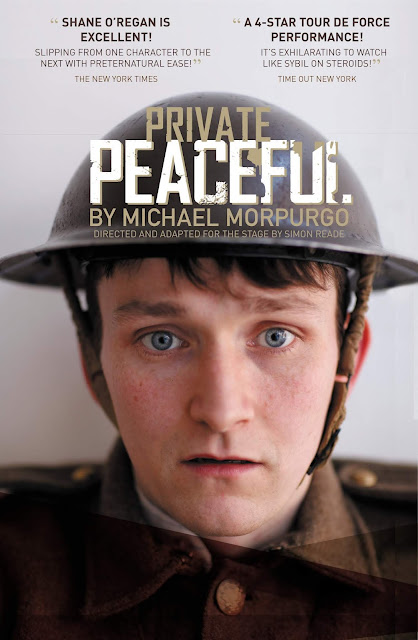 DIRECTED & ADAPTED FOR THE STAGE by Simon Reade


This heart-warming account of heroism and history, highlighting the dreadful horrors of war while celebrating the joyfulness of life, has moved audiences across Ireland, England and Scotland, and the tour comes to the United States this fall for the first time.

From Michael Morpurgo, the celebrated author of the international hit War Horse, comes the critically acclaimed production, Private Peaceful. Simon Reade’s stage adaptation of Morpurgo’s award-winning book garnered rave reviews throughout its 2017 and 2018 tours across Ireland, including 5-star reviews from The Guardian, The Sunday Herald, and The Irish Mail. Starring Shane O’Regan, his moving story of Tommo Peaceful’s life, from growing up in rural England to enlisting to fight in the first World War, comes to Chicago’s Greenhouse Theater Center, 2257 N. Lincoln Avenue in Chicago, IL, October 17 through November 11—the 100th anniversary of the end of World War One.

Private Peaceful is a timely reminder of the heroic sacrifices that were made by those involved in World War One. The story charts the life of a young soldier, Thomas ‘Tommo’ Peaceful, a Private played by O’Regan, who faces the firing squad for cowardice. As Tommo sits in his cell waiting for sunrise, he thinks back to some of his fondest memories and reflects on the events that made him the person he is today. Tommo recounts the fact that he and his elder brother Charlie do everything together- such as reminiscing on memories from their schooldays, sleeping and eating, and facing personal problems - they even fell in love with the same girl. But now they have to face the many facets of war together.

Can loyalty and a bond between two brothers overcome the brutality of the front lines and bring them safely home? When the lines of heroism and cowardice collide, what can one man or even a brother do to fight the injustices of it all?

The novel Private Peaceful was first published in 2003 and adapted into a stage play by Simon Reade in 2004 when it was first performed at the Old Vic Theatre in Bristol. The production was revived in 2012 where it sold out at the Edinburgh Fringe and London’s West End, followed by a tour of the United Kingdom.  A film adaptation of the novel was produced in 2012 and was directed by Pat O’Connor.

Private Peaceful will run at the Greenhouse Theater Center, 2257 N. Lincoln Avenue in Chicago from October 17 to November 11. The performance schedule is as follows: Wednesday, Thursday, Friday and Saturday evenings at 7:30 pm with additional matinee performances on Saturday and Sunday at 3:00 pm. Tickets range from $40 to $45 plus processing fees. For more information visit https://www.privatepeacefulusa.com/ or call the box office at 773-404-7336.


“Full of warmth as well as grief, conveying vividly how precious it is to be alive...” - The Sunday Times (UK)

“Heart-warming as well as wrenching.  A timely reminder of the heroic sacrifices” -Edinburgh Evening News (UK) ★★★★★

“Peerless work of reconnecting us with our past” -The Telegraph (UK) ★★★★★

“It should not be missed” -Sunday Independent (Ireland)

From the celebrated author of War Horse comes the story of Private Peaceful. Tonight, more than any other night Private "Tommo" Peaceful must stay awake and remember everything.

Tommo and his elder brother Charlie did everything together. They went to school together, faced their problems together, slept and ate together; they even loved the same girl. Can a bond and loyalty between brothers overcome the brutality of the war trenches and bring them safely home?

Michael Morpurgo (Author) is a renowned writer of recent times who has penned award winning books like ‘War Horse’, ‘The Lion Butterfly’ and ‘Private Peaceful’. This prolific writer has inked numerous books which were well acclaimed by readers and critics alike.  He was an acquaintance of renowned poet Ted Hughes and under his guidance he pursued his career as a writer.  These two writers, Hughes and Morpurgo, were the ones who came up with the idea of the ‘Children’s Laureate’.  Michael Morpurgo was the third Briton to be awarded with this honor.

Simon Reade’s (Direction & Adaptation) plays for theatre include: Pride & Prejudice (Theatre Royal Bath, 2009); Salman Rushdie’s Midnight’s Children (2003), Ted Hughes’s Tales from Ovid (both with Tim Supple, 1999) and Epitaph for the Official Secrets Act (with Paul Greengrass, 2009) all for the Royal Shakespeare Company, where he was Literary Manager and Dramaturg; Geraldine McCaughrean’s Not the End of the World (2007), Jill Tomlinson’s The Owl Who Was Afraid of the Dark?  (2003) and Philip Pullman’s Aladdin and the Enchanted Lamp (with Aletta Collins, 2005) all for Bristol Old Vic, where he was Artistic Director; and Philip Pullman’s The Scarecrow and His Servant (Poonamallee Productions/Southwark Playhouse, 2008).  Simon’s adaptations of Michael Morpurgo’s Private Peaceful (2008), The Mozart Question (2008) and Toro!  Toro!  (2010) have been seen on tour throughout the UK, Sweden and North America.  His books include a history of the international touring company Cheek by Jowl and Dear Mr. Shakespeare:  Letters to a Jobbing Playwright.

Shane O’Regan (Tommo Peaceful) trained at the Gaiety School of Acting, where in 2013, he received the Gaiety Theatre Bursary.

Pemberley Productions (Producer) is a company founded and run by Andrew D. Hamingson and Tim Smith. They are dedicated to bringing European drama to North America and North American drama to Europe. Next season, as well as co-producing the US tour of Private Peaceful, Pemberley is producing US tours of PW Productions tour of the National Theatre of Great Britain’s production of An Inspector Calls directed by Stephen Daldry and the first US tour of the long-running West-End production of Susan Hill’s The Woman in Black, directed by Robin Herford. Previous projects include a US national tour of the Royal Shakespeare Company / Filter Theatre production of Twelfth Night, a European tour of The Public Theater’s Apple Family Plays and an Irish Tour of the American Players Theatre’s production of James DeVita’s In Acting Shakespeare.  Pemberley also co-produced the US tour of Ensemble Basiani from the Republic of Georgia in 2016 and general managed the US tour of Druid Theatre’s The Beauty Queen of Leenane. This season Pemberley Productions is producing the second US national tour of Sancho by and with Paterson Joseph, and have general managed the national tour of Theatre De La Ville’s State of Siege and the NY premiere of Some Old Black Man at 59E59 Theatres.

Posted by Bonnie Kenaz-Mara at 9:53 AM