OPENING: 50th ANNIVERSARY OF 1776 VIA PORCHLIGHT REVISITS AT RUTH PAGE CENTER FOR THE ARTS, NOVEMBER 14 – 15 FOR 3 SHOWS ONLY

ARE YOU READY FOR A REVOLUTION?! 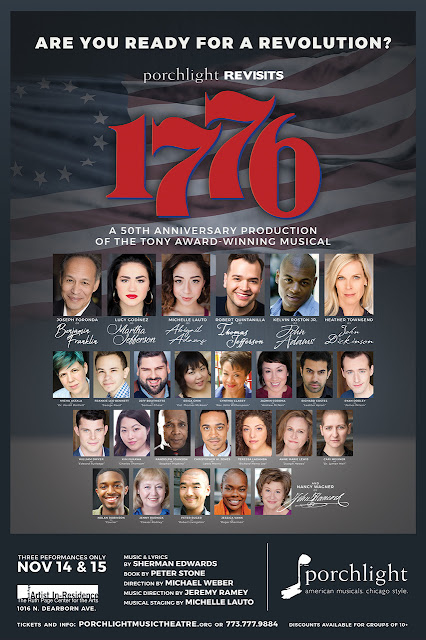 I'll be out to review for ChiIL Mama. The Porchlight Revisits Series is one of our favorites. It's a short, sweet, and incredibly fun romp through lost musical gems rarely seen on stage. It's here audiences get to discover the 'lost musicals' of Stephen Sondheim, Cole Porter, Kander and Ebb and more when Chicago's finest music theatre talent, with script in hand and fully staged, dust off these treasures and escort you to the world of Broadway’s past.

Porchlight Music Theatre begins its sixth season of Chicago’s “lost” musicals in staged concert series with Porchlight Revisits 1776, music and lyrics by Sherman Edwards and book by Peter Stone with direction by Artistic Director Michael Weber, musical direction by Jeremy Ramey and musical staging by Michelle Lauto. Porchlight Revisits 1776 is presented for only three performances Wednesday, Nov. 14 at 7:30 p.m. and Thursday, Nov. 15 at 2 and 7:30 p.m. at The Ruth Page Center for the Arts, 1016 N. Dearborn Street. Tickets for 1776 are available now for $37, subscriptions to the three performance series including 1776, Can-Can, March 6 and 7, 2019 and Minnie’s Boys, May 22 and 23, 2019 are $90/per person and available at porchlightmusictheatre.org or by calling the Porchlight Music Theatre box office at 773.777.9884.

Celebrating the 50th anniversary of the 1969 Tony Award-winner, Porchlight Music Theatre brings to Chicago the impassioned arguments and world-changing visions that were fought over in those sweltering summer days in Philadelphia nearly 250 years ago. The historic players will be present in the characterizations of Benjamin Franklin, Abigail Adams, Thomas Jefferson and others, showcasing the compelling debate of what are we willing to compromise to build a new country will ring out louder than the toll of the Liberty Bell.

With special permission from the rights holders, the approach to this production, which has been frequently presented with a primarily Caucasian and male identified cast playing the signers of the Declaration of Independence and the congressional staff, will be an inclusive company of actors, expanding the casting potential both in ethnic and gender identities, in modern dress.

Every Porchlight Revisits begins with Behind the Show Backstory, an entertaining and informative multimedia presentation, created and hosted by Artistic Director Michael Weber, introducing the evening’s production including the show’s creative history, juicy backstage gossip and much more. 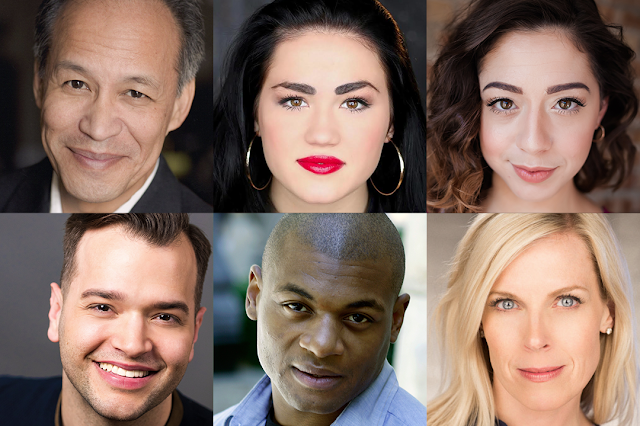 ABOUT MICHAEL WEBER, director
Michael Weber is the artistic director of Porchlight Music Theatre where, under his leadership, the company has received the Best Production Equity Jeff Award for the past five consecutive years. He previously served as artistic director for the inaugural season of Drury Lane Theatre Water Tower Place (now The Broadway Playhouse) and at Theatre at the Center (1998 – 2004).  Weber recently made his Porchlight stage debut in Porchlight Revisits Do Re Mi this past spring. His productions of End of the Rainbow, Sweeney Todd, A Funny Thing Happened on the Way to the Forum, Pal Joey, Assassins and Side Show at Porchlight Music Theatre, Grand Hotel at Drury Lane Theatre Water Tower Place and She Loves Me at Theatre at the Center were each nominated for the Joseph Jefferson Award for Best Production. Directing credits include Living the History-125 Years of The Auditorium Theatre starring Patti LuPone and John Mahoney, Fifth of July and Talley’s Folly at the Oak Park Festival Theatre, The Petrified Forest at Theatre at the Center, Beauty and the Beast at Marriott Theatre, Over the River and Through the Woods at The Mercury Theater, A Funny Thing Happened on the Way to the Forum at Pheasant Run Theatre and Cirque du Symphony at Sears Center Arena. The recipient of two Joseph Jefferson Awards, he has written and directed the past twelve Joseph Jefferson Awards ceremonies. Weber’s regional acting credits include Annie Get Your Gun and Gypsy (both starring Patti LuPone) at Ravinia, Disney’s My Son Pinocchio at First Stage Milwaukee, Around the World in 80 Days at Cleveland Playhouse, The Winter’s Tale and Henry V at Chicago Shakespeare Theatre, It Had To Be You (starring Cindy Williams and Eddie Mekka) at Little Theatre on the Square, Angel Street at First Folio Shakespeare and The Gifts of the Magi at Indiana Repertory. Weber is proud to serve as a pledge host on WTTW, Channel 11.

ABOUT JEREMY RAMEY, music director
Jeremy Ramey is a concert pianist, conductor and music director based in Chicago.  He was awarded the non-equity Jeff Award for music direction for his work on Theo Ubique’s Light in the Piazza in 2012 and again in 2013 for the company’s Smokey Joe’s Cafe. Some of his favorite music directing projects include Altar Boyz at Downtown Drury Lane, Hats! with Grammy award winner Melissa Manchester and Tony-nominated director Lynn Taylor-Corbett, Forever Plaid at Drury Lane Oakbrook and C’est la Vie at Light Opera Works. Ramey was also the music director for both the world premiere and Wisconsin premiere of Adding Machine. He received his training in piano performance at Rhodes College, Northwestern University and The Juilliard School of Music. He has taught at Northwestern University, Columbia College, Loyola University and the University of Memphis. He is also the music director at Unity Church on the Northshore in Evanston, Illinois.

ABOUT MICHELLE LAUTO, musical staging and “Abigail Adams”
Michelle Lauto is Porchlight Music Theatre’s education associate and starred in Porchlight’s hit In The Heights. Lauto is an award winning Chicago based actor, singer, writer and educator having grown up in the Jersey suburbs of New York and begun acting in and around the city at the age of 16. At 21, she moved to Chicago to study her other love: comedy. She is a 2014 graduate of The Second City Training Center's Conservatory program. Since graduating, Lauto has worked at several prominent Chicago area theaters, including appearing in the Original Chicago Cast of Spamilton: An American Parody for which she won a 2017 Jeff Award for Best Actress in a Revue. She also enjoys working as a teaching artist and sharing her love of musical theatre with the next generation.

ABOUT LUCY GODINEZ, “Martha Jefferson”
Currently appearing as “Serena” in Legally Blonde at The Paramount Theatre, Lucy Godinez burst onto the Porchlight stage receiving rave reviews as “Nina” in In The Heights and in New Faces Sing Broadway 1969. She has appeared in Chicago in Hair at The Mercury Theatre, A Christmas Carol at The Goodman Theatre and others.

ABOUT CYNTHIA CLAREY, “The Reverend John Witherspoon”
In addition to her Porchlight debut in The Scottsboro Boys, Cynthia Clarey has sung leading roles in Thea Musgrave’s Voice of Ariadne, which was her New York City Opera debut, Anthony Davis’ Under the Double Moon, Minoru Miki’s Actor’s Revenge, Myron Fink’s Chinchilla and many more.  She has sung the role of “Carmen” throughout the world and toured in seven countries with Peter Brook’s innovative La Tragedie de Carmen.

ABOUT PORCHLIGHT REVISITS
One of Porchlight’s most popular offerings, Porchlight Revisits celebrates the lost musical gems of The Great White Way. Everyone knows Rodgers and Hammerstein's hits Oklahoma!, South Pacific, and The Sound of Music. But have they ever had the chance to experience, live on stage, their rarely seen Broadway shows Allegro, Me and Juliet or Flower Drum Song? It's here audiences get to discover the 'lost musicals' of Stephen Sondheim, Cole Porter, Kander and Ebb and more when Chicago's finest music theatre talent, with script in hand and fully staged, dust off these treasures and escort you to the world of Broadway’s past.

The experience begins with Behind the Show Backstory, an entertaining and informative multimedia presentation, created and hosted by Artistic Director Michael Weber, introducing the evening’s production including the show’s creative history, juicy backstage gossip and much more.

Porchlight Revisits is the ticket to go behind the scenes with an introduction to the luminaries who created the greatest musicals of all time and an opportunity to discover a new 'old' favorite all in one big show—plus Porchlight Revisits subscribers are invited to influence the choosing of future titles in the series.

The season program is partially supported by a grant from the Illinois Arts Council Agency, a state agency, and by a CityArts Grant from the City of Chicago Department of Cultural Affairs & Special Events.
Posted by Bonnie Kenaz-Mara at 11:16 AM