NOW PLAYING THROUGH MARCH 26TH AT THE ORIENTAL THEATRE 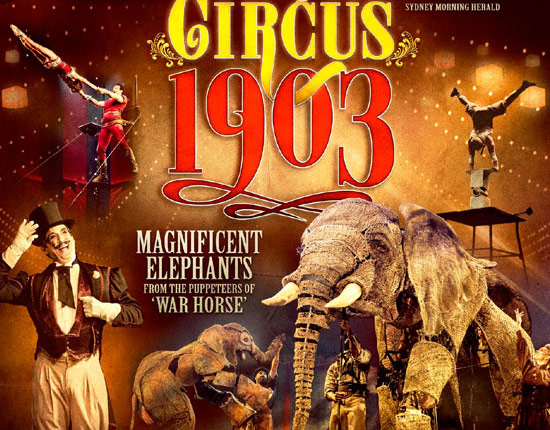 Review:
As promised, Circus 1903 –The Golden Age of Circus! delivers impressive, life sized elephantine puppets with personality to spare, vintage thrills, side show schtick, period piece costumes, and an altogether enjoyable evening out. Sometimes less is more and featuring one expert contortionist, one aerialist, one juggler etc. at a time with theatrical lighting and a dramatic score makes for a stronger impression than traditional arena, three ring circus shows, with stimulus overload. 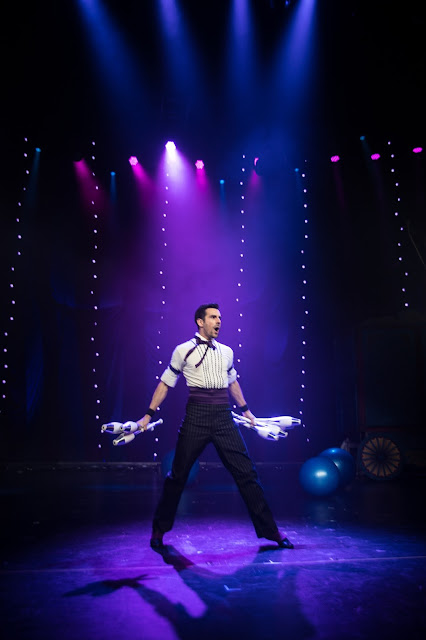 I took my 13 year old daughter who has studied circus arts for 5 years and she enjoyed the show. It's a great pick for all ages, family friendly fun. Little ones and adult volunteers may even be chosen to assist with the acts! 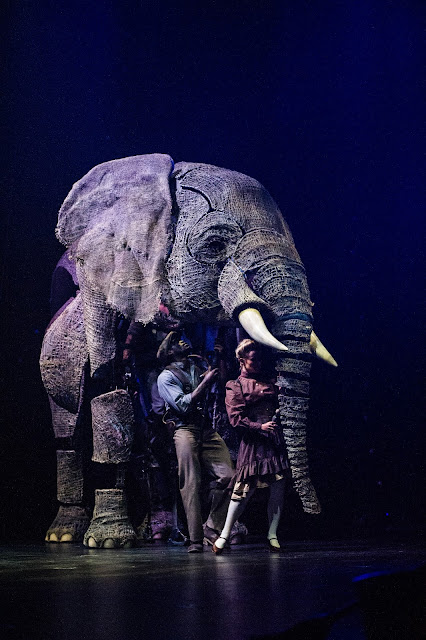 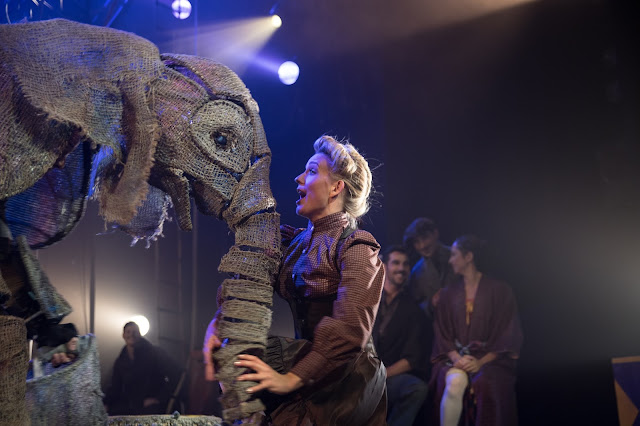 The puppetry by award winning War Horse veterans was fun to see, though we would have liked to see more of the elephant mother and tot. Their primary scene is just drinking water from a bucket and a few very basic circus moves. A bigger role with more circus tricks and a rider would have been more impressive and worthy of their delightful design. The side show silliness, except the talented contortionist, could have been skipped, along with the whip act. Having seen an actual Guinness World Record holding whip act annually at Renaissance Faire, this was anticlimactic. 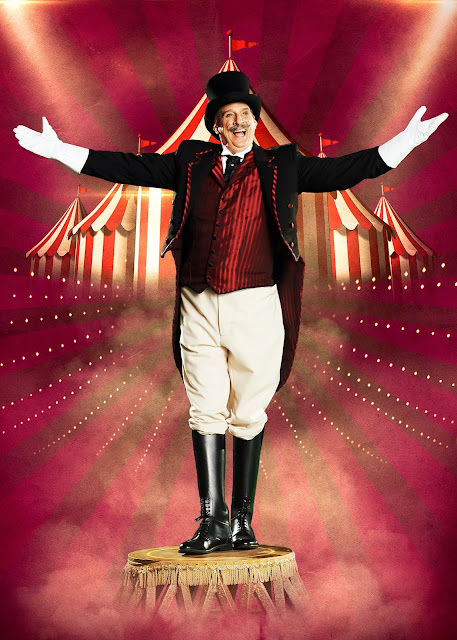 Circus 1903 –The Golden Age of Circus! also misses a golden opportunity with little plot or character development and nearly nothing historical except the costumes. We're lucky in Chicago to have a world class circus scene, and we've seen what's possible when circus arts are incorporated into period piece shows, to advance the storyline. Lookingglass Theatre, The House Theatre, Goodman Theatre, and Actors Gymnasium, among others, have done stellar shows with compelling characters and interesting plots. Circus 1903 –The Golden Age of Circus! was basically just a series of stunts, albeit excellent ones, by skilled performers. We were left wanting more of a plot specific to 1903 and circus history, as well as more back story and relationships between the performers.

That said, if you're nostalgic for the parading pachyderms of circus days gone by, without the animal ethics issues, and entranced by performers with extraordinary skills, Circus 1903 –The Golden Age of Circus! is fun for an evening.

Broadway In Chicago is thrilled to introduce CIRCUS 1903 –The Golden Age of Circus! From the producers of the world’s biggest magic show, The Illusionists, and the award-winning puppeteers of War Horse comes a turn-of-the-century circus spectacular. CIRCUS 1903 –The Golden Age of Circus has all the thrill and daredevil entertainment one would expect from the circus, with an exciting new twist. Discover the golden age of circus at the Oriental Theatre (24 W Randolph) March 21- 26 as CIRCUS 1903 captivates audiences of all ages.

Sensational puppetry puts elephants back in the ring as never seen before by introducing the largest- ever performing African elephant and her baby, along with a huge cast of the most unique, amazing and dangerous circus acts from all four corners of the world – from strong men to contortionists, acrobats to musicians, high wire and much more!

The award-winning team of puppeteers and model makers who created the National Theatre’s War Horse brings to life two stunningly beautiful elephants for CIRCUS 1903. Featuring groundbreaking advances in design and expression, the puppets appear throughout the show as the mother teaches her calf the tricks of the trade. 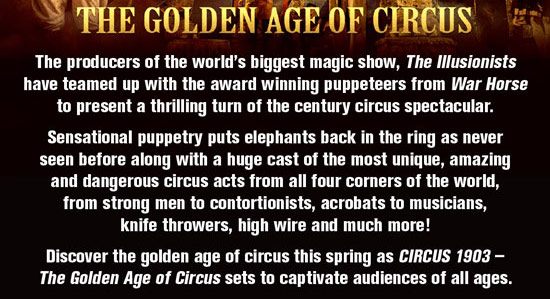 CIRCUS 1903 –The Golden Age of Circus is produced by Simon Painter, Tim Lawson and MagicSpace Entertainment. Painter and Lawson have created Le Grand Cirque, Le Noir, Cirque Adrenaline and The Illusionists in over 250 cities from London to Sydney to Broadway, as well as presenting A Chorus Line, Chitty Chitty Bang Bang and Fiddler on the Roof through Australia. MagicSpace Entertainment has been producing and presenting national tours, Broadway shows, concerts and museum exhibits worldwide for over 35 years, including The Illusionists - Witness the Impossible, Donny & Marie – A Broadway Christmas, American Idiot, RAIN - A Tribute To The Beatles On Broadway, Lord of the Dance created by Michael Flatley, Jesus Christ Superstar, A Chorus Line and national concert tours by Janet Jackson, Cher and Fleetwood Mac.


CIRCUS 1903 –The Golden Age of Circus is designed by scenic artist Todd Ivins and set in an extraordinary and decadent circus tent. Act One is set in front of the circus with trucks, props and rigging. Act Two features the tent, flagpoles and rigging being raised into the roof of the theatre.

The costumes for CIRCUS 1903 –The Golden Age of Circus are designed by Angela Aaron, whose impeccable recreations of original turn-of-the-century circus costumes are a work of art inspired by authentic photographic collections, studying historical museum pieces and discussions with experts and historians.

No circus would be complete without its music. The soundtrack of CIRCUS 1903 –The Golden Age of Circus encapsulates the time period and accentuates the thrill and danger of the acts. It is composed by Evan Jolly, composer of many of Painter and Lawson’s international hits. 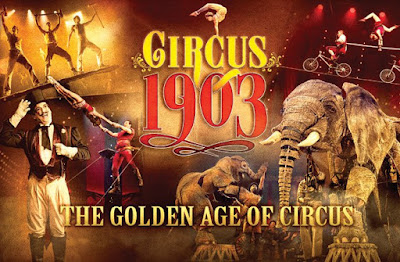 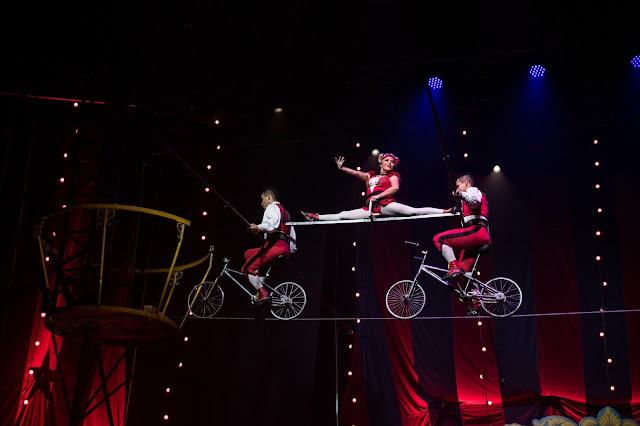 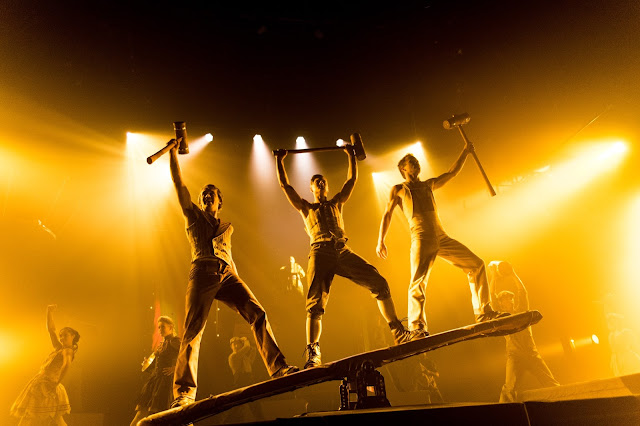