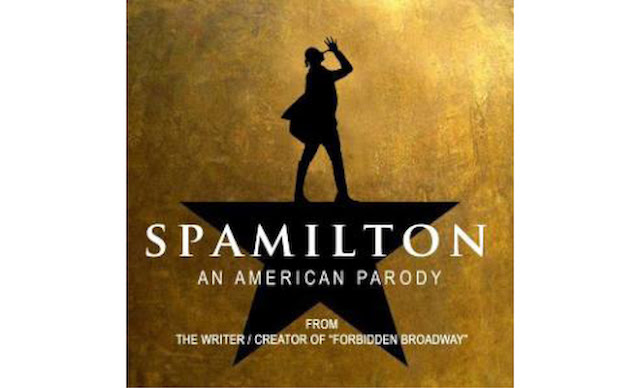 “Spamilton,” the critically acclaimed off-Broadway parody of Broadway smash “Hamilton,” created by Gerard Alessandrini, the mastermind behind "Forbidden Broadway," announced today that the show will open its first production outside New York this spring for a strictly limited 12-week engagement. The Chicago run begins performances Friday, March 3, 2017 at the Royal George Theatre’s Cabaret/Studio Theatre (1641 N. Halsted) and runs through Monday, May 29. The production is in discussions for additional productions in Los Angeles, London, and a U.S. National Tour for 2017.

“‘Hamilton’ opened my eyes to a world of brand new comic possibilities, and inspired me more than anything has in many long years,” said “Spamilton” and “Forbidden Broadway” Creator Gerard Alessandrini. “We have been delighted that New York audiences welcomed us with open arms, and are thrilled that we will be opening our next production in the Windy City. The rest of the country need not worry, as we hope to welcome them to our ‘room where it happens’.”

“Spamilton,” which was initially scheduled as an exclusive 18-performance engagement, has extended three times off-Broadway and is now playing its fifth smash month of an open engagement at the Triad (158 West 72nd Street). The New York production earned rave reviews across-the-board, with Ben Brantley of the New York Times calling it “smart, silly and convulsively funny!” and Lin-Manuel Miranda exclaiming “I laughed my brains out!”

“Spamilton” is produced in Chicago by John Freedson, David Zippel, Gerard Alessandrini, Margaret Cotter and Liberty Theatres, and in association with JAM Theatricals.

Acclaim for “Spamilton:”
“I laughed my brains out!”
-Lin-Manuel Miranda

"The next best thing to seeing 'Hamilton.'"
-New York Post

“The laughs are huge and nonstop! Even if you haven’t seen “Hamilton,” you’ll get the jokes, which are pretty damn funny.”
-David Cote, Time Out New York (Best of 2016 – Honorable Mention)

“’Spamilton’ is so infectiously funny that it could easily run as long as its inspiration!”
-Frank Scheck, The Hollywood Reporter

“You don’t have to see ‘Hamilton’ to have side-splitting fun at ‘Spamilton.’" All that is required is that you love Broadway.”
-The Huffington Post

Posted by Bonnie Kenaz-Mara at 6:46 AM