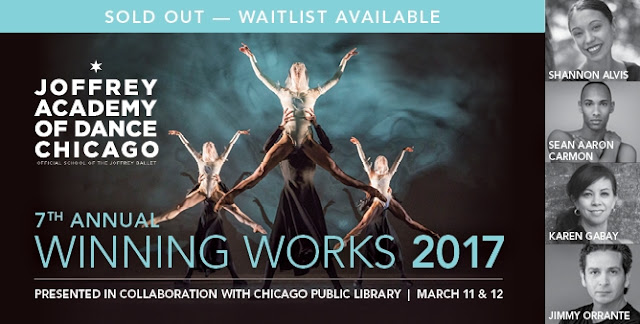 **All shows are currently wait list only. Apply HERE.**

The Joffrey Academy of Dance, Official School of The Joffrey Ballet, announces the recipients of the seventh annual Winning Works Choreographic Competition: Shannon Alvis, Sean Carmon, Karen Gabay and Jimmy Orrante. This announcement follows a national call for ALAANA (African, Latino(a), Asian, Arab and Native American) artists to submit applications, which began in July. The choreographers’ world premiere works will be showcased on the members of the Joffrey Academy Trainee Program and Joffrey Studio Company in “Winning Works” presented in collaboration with the Chicago Public Library Harold Washington Library Center located at 400 South State Street, in three performances, Saturday, March 11 at 2:00 PM and 7:00 PM and Sunday, March 12 at 2:00 PM. For the first time in its seven-year history, the “Winning Works” performance will be free to audiences.

The Winning Works Choreographic Competition was created to recognize talented and emerging ALAANA choreographers and to provide them with a platform to showcase their original and innovative work. The winning choreographers are awarded a $5,000 stipend and have the opportunity to seek guidance from Joffrey Artistic Director Ashley Wheater and Head of Studio Company and Trainee Program Raymond Rodriguez.

“It is through the work of emerging choreographers that we are able to experience the world we live in through the future of our art form,” said Ashley Wheater, Artistic Director of The Joffrey Ballet. “Winning Works not only allows the Joffrey Studio Company and Trainees the chance to perform in these world premiere works, but also creates an opportunity to showcase the inspiring choreography of these diverse and talented artists.”

"Dance is a robust and rich language and this year, the Joffrey is honored to partner with the Chicago Public Library Harold Washington Library Center as we present the seventh annual “Winning Works”, said Greg Cameron, Executive Director of The Joffrey Ballet. “Chicago Public Library Commissioner Brian Bannon and Mayor Rahm Emanuel believe in the power of storytelling, community, and the expression of dance to engage and inspire - a mission well aligned with the “Winning Works” program. We're thrilled to present these four choreographers and look forward to activating the Chicago Public Library Harold Washington Library Center with their unique perspectives.”

"We are thrilled to launch this partnership and co-host these ambitious programs”, said Brian Bannon, Chicago Public Library Commissioner.  “Chicago Public Library is dedicated to supporting lifelong learning for patrons of all ages, and we know learning opportunities take many forms, such as those expressed through the performing arts. These “Winning Works” performances will provide Chicago Public Library and The Joffrey Ballet with an opportunity to engage people of all backgrounds and ages in a way that may inspire them to pursue new and exciting interests with both organizations."

Shannon Alvis is originally from Greenwood, Indiana and received her training at Butler University and the University of Utah. She began her career with the second company of Hubbard Street Dance Chicago (HSDC), then went on to dance and perform professionally with HSDC for nine years. In 2009, Ms. Alvis went on to further her growth as a dancer at Nederlands Dans Theater under the direction of Jim Vincent and Paul Lightfoot. During her time in Chicago and Europe, she toured internationally performing works by many world renowned choreographers such as: Jiří Kylián, Nacho Duato, William Forsythe, Ohad Naharin, Jorma Elo, and Crystal Pite. Having since returned to Chicago and given birth to a little baby girl, Shannon is once again sharing her artistry with the community. She has appeared in several productions at the Lyric Opera including Rob Ashford's Carousel, Susan Stroman's The Merry Widow, and most recently Les Troyens with Helen Pickett. She is on faculty at the Joffrey Academy of Dance, and Interlochen School for the Arts. Ms. Alvis is now very happy to be exploring her creativity through works of her own. In the past year, she has choreographed for Visceral Dance Chicago, Thodos Dance Chicago, and DanceWorks Chicago.

Sean Carmon joined Alvin Ailey American Dance Theater in 2011 and has performed major solo and featured roles in ballets by many notable choreographers. His own choreographies have been performed all across the country and internationally and have been lauded as "everything and then some..." and "powerful" and "seriously flawless" by major national print and online publications such as The New York Times, Newsweek, JET Magazine, BroadwayBlack, DanceSpirit and Dance Magazine. He has choreographed for the Youth America Grand Prix among other national competitions. Mr. Carmon has also created works on the AAADT for their 2012 and 2016 Ailey Dancer's Resource Fund benefit performances. Mr. Carmon created a new, critically acclaimed work, Youth Novels, on METtoo, a youth company, in Houston, TX and was commissioned by The Dance Gallery Festival to create fever dream featuring two fellow Ailey dancers. He also teaches master classes in contemporary jazz and Horton-based modern and choreographs for dance conventions, high schools, colleges and universities across America and internationally.

Karen Gabay grew up in San Diego and has had a career as a ballerina that spans over thirty-five years.  Her repertoire includes Odette/Odile in Swan Lake, Giselle in the title role and her most favorite role of Juliet in Romeo & Juliet. During Gabay’s long association with Ballet San Jose (formerly the Cleveland San Jose Ballet) she began dancing principal roles at the age of eighteen and later held the title of Artistic Associate.  As a choreographer, she created numerous ballets for the company including the 2012 production of BSJ’s annual production of The Nutcracker which led to her first children’s book, “The Nutcracker: A Story in Verse.” Gabay was awarded the Artist Fellowship Award for choreography by the Arts Council Silicon Valley and was nominated for an Isadora Duncan Award for her performance in Tzigane. Gabay is the co-founding Artistic Director of her own ballet troupe, Pointe of Departure which performs in the bay area and in Northeast Ohio.  She is an active Screen Actors Guild Member and continues to pursue work in film and television. Gabay recently joined the faculty at the San Francisco Ballet and is part of their Master Class series.

Jimmy Orrante was a recipient of the 2005 Princess Grace Choreography Award, the 2011 Special Project Award for DanceTech and the sole recipient of the 2014 Choreography Mentorship Co Commission (CMCC) Award, all from the New York City based Princess Grace Foundation.
A native of Los Angeles, he attended The Los Angeles County High School for the Arts and continued his training at The North Carolina School of The Arts. He has danced with Nevada Ballet Theatre, Memphis Ballet and 20 years with BalletMet where he had the opportunity to choreograph 15 premieres for the company. In addition to BalletMet, he has created ballets for Ballet Austin, Motion Dance Theatre, Rochester City Ballet, Ballet Arkansas, Atlanta Ballet’s Wabi Sabi and UC Irvine’s National Choreographers Initiative. Mr. Orrante’s repertoire includes two full length ballets, The Great Gatsby, which premiered with BalletMet in 2009 and was reprised in 2015, and the children’s ballet The Ugly Duckling for Rochester City Ballet. This performance series included a successful sensory friendly performance which was featured on PBS’s Facebook page. His choreography on students has earned him several awards including the National Recognition Award from Regional Dance America, and he has served as choreographer in residence at Dennison University. Jimmy currently resides in Columbus, Ohio with his wife and 3 children.

About the Joffrey Academy Trainees
The Joffrey Academy Trainee Program is a one to two-year program for students ages 17 and older who are preparing for a professional dance career. Students are selected to participate in the Trainee Program by invitation from Artistic Director Ashley Wheater and the Head of Studio Company and Trainee Program Raymond Rodriguez. This esteemed and rigorous program gives students a unique and well-rounded experience to prepare them for the next step in their careers. Trainees rehearse and perform classical and contemporary works from The Joffrey Ballet’s extensive repertoire and have the opportunity to work with guest choreographers throughout the year. Graduates of the Academy have gone on to dance professionally with companies throughout the world including The Joffrey Ballet, American Ballet Theatre, New York City Ballet, Staatsballett Berlin, Dresden Semperoper, Complexions, Milwaukee Ballet, Memphis Ballet, Kansas City Ballet, BalletMet, Polish National Ballet, Slovak National Ballet, and many more.

For more information on the Joffrey Academy of Dance, Official School of The Joffrey Ballet and its programs please visit joffrey.org/academy.
Posted by Bonnie Kenaz-Mara at 7:45 AM