Ah Xanadu. The high art of 80's neon, leg warmers, rainbow unicorns and roller disco lives on! American Theater Company's scrappy little musical deserved their unanimous standing ovation for this one. Don't be fooled by the storefront aesthetic. This cast is full of powerhouse vocalists and quadruple threat pros who not only sing, dance and act, but do it on roller skates! 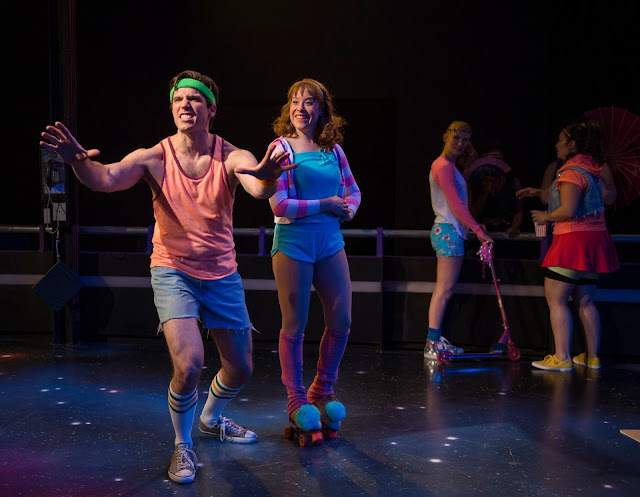 I'm still grinning ear to ear from this hilarious and heartfelt parody. And I'm dazed and amused they managed to transform their storefront into a full on mini roller rink and theatre in the round! This sweet setup makes for intimate staging, and provides some great audience interaction laughs, and in your face (or your lap) physical comedy.

One line from the show keeps coming back to me, "It's like children's theatre for gay 40 year olds." Yes... Yes it is. This campy comeback is sure to steal hearts. It's wittier and far funnier than the movie it sprang from, with the original pop hits and absurd premise intact, and the addition of better tunes, too. Lili-Anne Brown (Director) has guided this production to the height of hilarity. Landree Fleming (Kira) is a stellar stand out. The quick pacing and impeccable comedic timing of the entire ensemble makes this show a true treat. 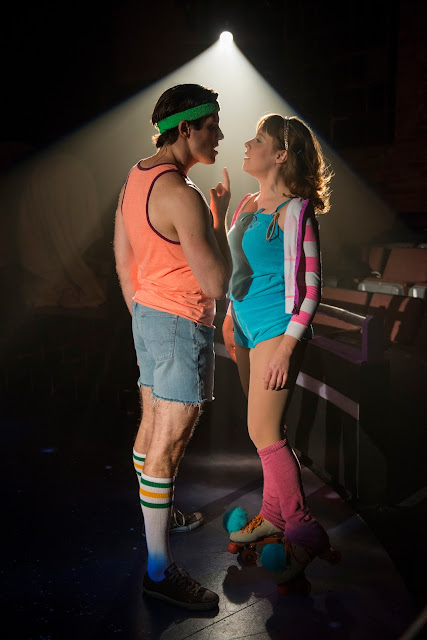 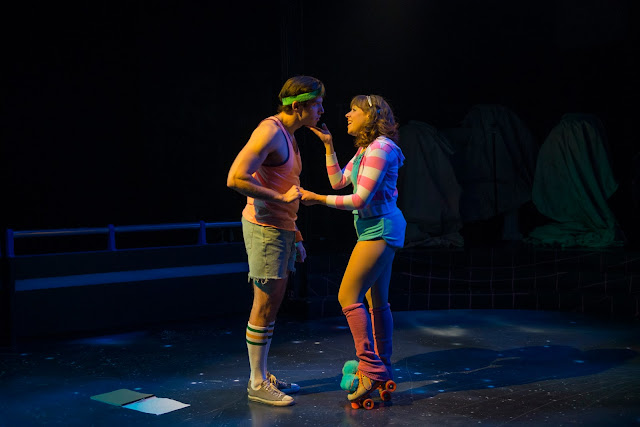 Gone are the peasant blouses and billowing skirts of the movie version of Kira, though the muses do have modified 70's versions of toga like robes in the form of maxi dresses and parachute pants. We dig Kira's ultra 70's costume choices of a terrycloth jumpsuit, leg warmers and giant pompons on the skates. Sonny was a vision of the past in tube socks, head band, cut offs and neon.

The casting of several of the muse sisters as men added extra levels of fun to this production, and they camped it up classically. We also loved the gentle and too true digs on the whole 80's aesthetic, and on Olivia Newton John's Australian accent and affectations. They even snuck in a nice little Singin' in the Rain tribute for Gene Kelly, who was also in the original 1980 movie. The muses have a much bigger role in the stage version, including an overt plot to hex Kira and make her fall in love with a mortal. 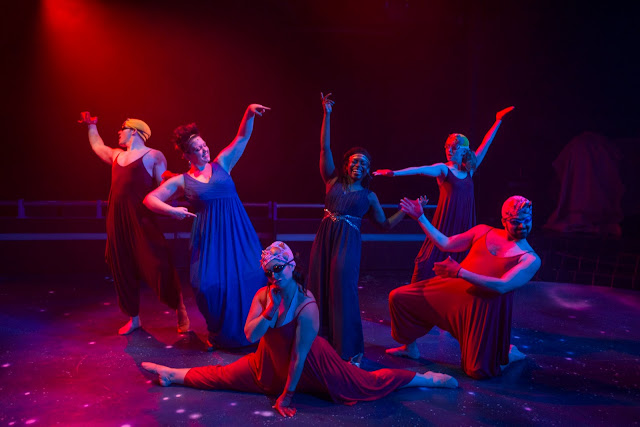 I prepped for the opening with a family XANADU movie night with my husband, who vaguely remembered it, and my teens who had never seen it. XANADU came out when I was 13 and my husband was 15 -- exactly the ages our kids are now. It was a fun trip through the waaaaay back machine, especially since the movie recreates both the 40's and 80's. ATC's musical version stands alone as a fun romp through the decades, whether you've seen the movie or not, but if you have seen the movie (especially recently) the stage show lampooning is far funnier.

It's tough to strike a balance between parody and snark and ATC's XANADU rocks that balancing act with panache. This is an absolute must see and fun for all ages. This ATC tribute is performed in memory of one of their inspirations, former artistic director, PJ Paparelli, who's untimely death last year shook the company and sent ripples through Chicago's theatre community. It's so great he can be remembered for his driving, documentary style productions on social problems, like Chicago's public housing crises, and also in a playful, high camp way, with XANADU. Maybe he's hangin' on the other side with Zeus and the muses today?! I wouldn't be surprised. At any rate, his life, and work, and even his silly film favorites continue to inspire ATC and Chicago's creative scene. 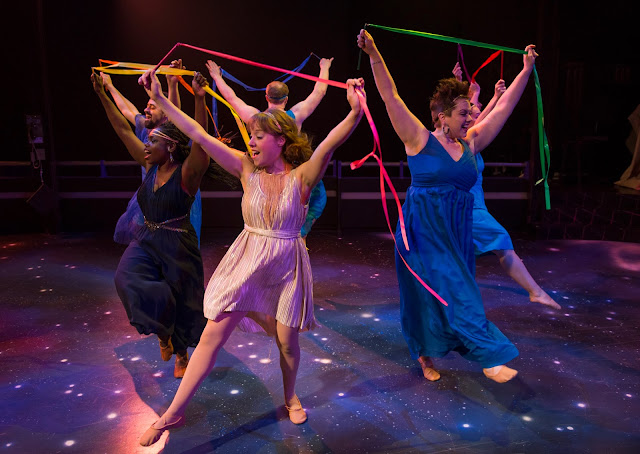 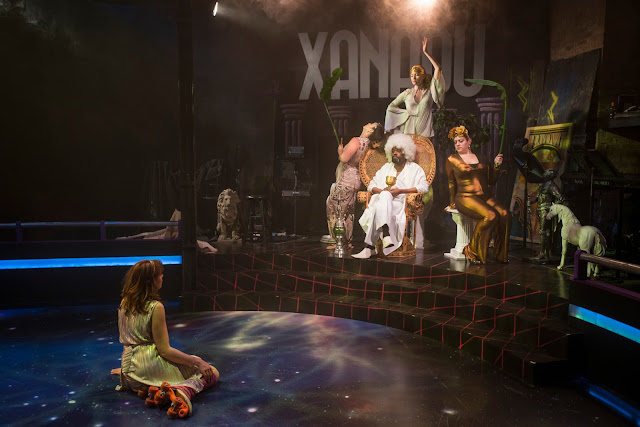 Xanadu Performance Schedule:
Regular Run: June 7–July 17: Tuesday–Saturday evenings at 8 p.m. with matinees on Saturdays and Sundays at 2 p.m.
American Theater Company (ATC) opens musical comedy Xanadu, the final production of its Legacy Season, this Sunday, June 5. Presented as a tribute to ATC’s late Artistic Director PJ Paparelli—a not-so-secret fan of this camp classic—Xanadu is directed by Lili-Anne Brown and runs at ATC now through July 17, 2016. The production has music and lyrics by Jeff Lynne and John Farrar and a book by Douglas Carter Beane, based on the 1980 Universal Pictures film of the same title.

As the final event of its season-long Legacy Campaign, ATC will host a special performance of Xanadu on Wednesday, June 8 at 8 p.m. The event features a post-show reception and talk-back with actress Katie Hanley who, among other theater and film credits, appeared in the 1980 Universal Pictures film Xanadu, and on Broadway as “Marty” in the original 1972 production of Grease. Hanley will be joined by native Chicagoan Jim Jacobs, co-creator of the musical Grease and ATC’s Legacy Campaign chairman.

Tickets are $75 for a single ticket and $125 for a pair. Proceeds from the campaign are dedicated to developing and producing new work and providing free education programming to Chicago Public High School students. To purchase tickets for this special Xanadu evening, visit www.atcweb.org or call 773-409-4125. 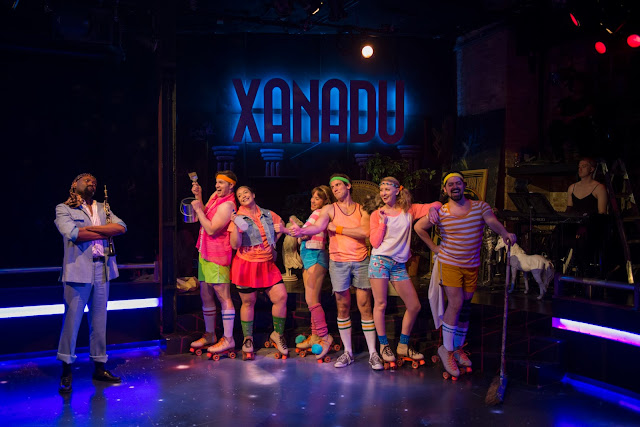 American Theater Company is partially supported by a grant from the Illinois Arts Council, a state agency, and CityArts grant from the City of Chicago Department of Cultural Affairs and Special Events, the Lloyd A. Fry Foundation, Polk Bros. Foundation, the MacArthur Fund for Arts and Culture at Prince, and the Shubert Foundation.
Posted by Bonnie Kenaz-Mara at 9:54 AM