Going through C2E2 withdrawl? This Friday’s release of The Avengers: Age of Ultron, will help ease the pain. Want more live action, super hero fun?! Chicago-area fans will be able to see all their favorite Marvel Super Heroes and villains, in-person, when the first-ever, live-action Marvel arena show hits town this September!

With amazing pyrotechnics, incredible motorcycle stunts, fast-fire aerial dramatics, and the largest rigging of any touring show to-date, it truly is a mind-blowing  experience. 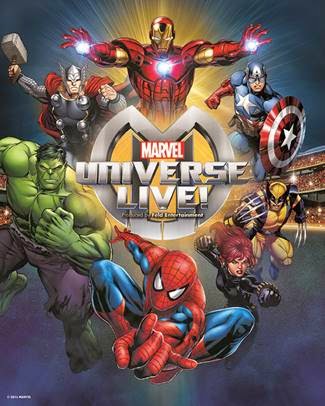 Produced by Feld Entertainment, producers of Ringling Bros. and Disney On Ice, Marvel Universe Live! is being hailed as the most technologically advanced family entertainment spectacular of all time.

Marvel fans, assemble! Marvel Universe LIVE! is taking the live entertainment experience to a whole new level, with a mind-blowing show unlike anything Chicagoans have seen before. The action-packed arena extravaganza slated to play Chicago’s United Center, Sep. 10-13, then move to the Allstate Arena, Sep. 18-20, will feature a full complement of favorite Marvel Super Heroes including Spider-Man and The Avengers (Iron Man, Black Widow, Hulk and more) and threatening villains come to life.

Produced by Feld Entertainment, Marvel Universe LIVE! will captivate audiences with an authentic and original story that brings more than 25 Marvel icons together on one epic quest. The Cosmic Cube, the source of ultimate power and one of the most feared and coveted treasures in the Marvel Universe, has been shattered into pieces by the Mighty Thor in order to prevent it from falling into the wrong hands. With the pieces scattered across the globe, Thor’s villainous brother Loki devises a scheme to clone its powers, inciting a threat that could not only decimate Earth but also obliterate the Universe.

Fans will definitely feel the energy with cutting-edge special effects, pyrotechnics, aerial stunts, martial arts, motorcycles and more. It’s being hailed as the most technically advanced live show ever; a once-in-a-lifetime, monumental performance.

Posted by Bonnie Kenaz-Mara at 7:32 AM