InFUSION THEATRE CO. PRESENTS CRYSTAL SKILLMAN’S
ANOTHER KIND OF LOVE –
A PUNK ROCK PLAY
MAY 10 – JUNE 14, AT THE CHOPIN THEATRE
This Dark Comedy About Family, Fame and Rock-n-Roll is Directed by Mitch Golob with Music Direction by Mucca Pazza’s Jefferey Thomas
and Original Music by Tony-Nominated and Obie-Winner Heidi Rodewald 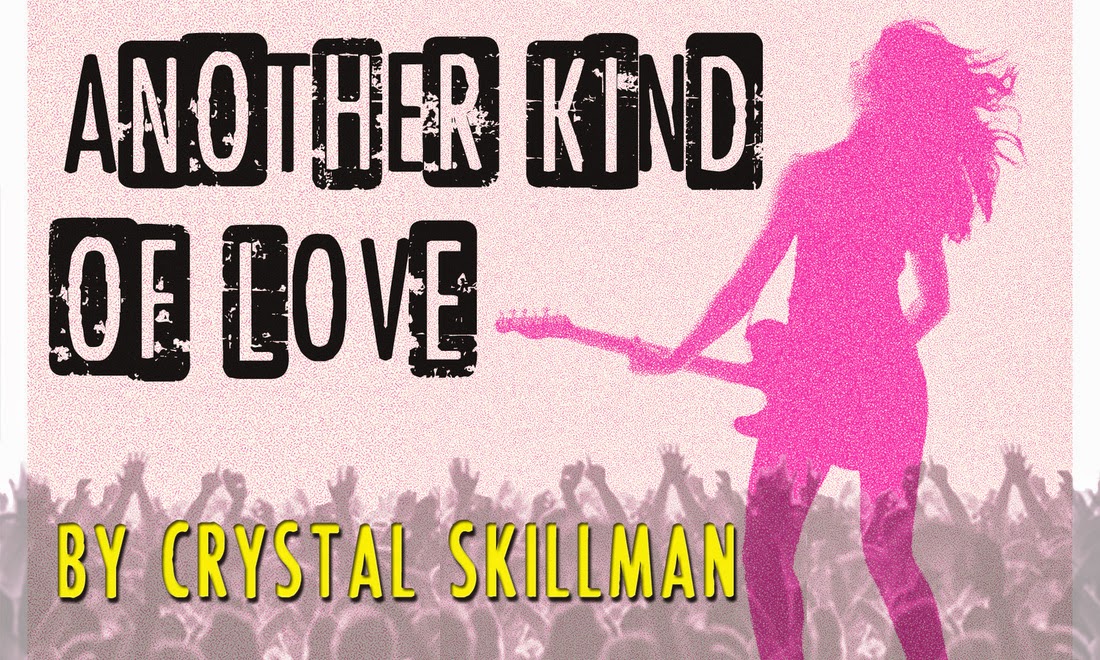 After being apart for 15 years, sisters (and band mates) reunite for a one-night concert commemorating the anniversary of their rock legend mother’s suicide. Featuring live performances of an original score by Rodewald, past regrets, present emotions and future doubts converge with punk and family in Skillman’s new play developed around the country this year at IAMA Theatre Company in Los Angeles, LiveWire in Chicago, Live Girls! in Seattle, Women’s Project Theater in New York City and, most recently, at New York Stage and Film as part of the Lark Play Development Center’s retreat this summer.

ABOUT CRYSTAL SKILLMAN, playwright and co-lyricist
Crystal Skillman is an award winning Brooklyn based playwright. Her three recent plays, King Kirby, co-written with Fred Van Lente, Geek! and Cut, have all earned Critics Picks from The New York Times. Wild earned three 2014 New York Innovation Theater Award nominations for its sold out production at IRT Theater this spring, (following a critically successful run in Chicago with Kid Brooklyn Productions and Off Broadway in MCC Theater’s Playlabs at the Lucille Lortel.) Skillman’s other plays include: The Vigil or The Guided Cradle, winner of the 2010 New York Innovative Theatre Award for Outstanding Full-Length Script and Drunk Art Love, now a web series directed by Sanjit De Silva. She is currently at work on a new play, Rain and Zoe Save the World, about two teenage activists on a cross-country mission. She is writing the books for two musicals with award-winning composer Bobby Cronin: The Concrete Jungle and the musical theater adaption of the film Mary and Max, to be directed by Outer Critics Circle Award-winning Stafford Arima with mask work by Joseph Osheroff. In Chicago her work has also been seen with The New Colony, Collaboraction, DePaul University and LiveWire Chicago Theatre.

ABOUT MITCH GOLOB, director
Mitch Golob has directed many InFusion productions: the world premieres of The Improv Play, Pluto is Listening, Ghostbox and Créole (nominated for five Black Theatre Alliance Awards), the United States premiere of The Last Supper and the Midwest premieres of Intrigue With Faye, Rhymes With Evil, Soul Samurai, and Fight Girl Battle World and Ithaka. Other directing projects include 8 By Tenn at Hartford Stage Company, working with Tony Award Winners Elizabeth Ashley and Amanda Plummer, the U.S. premiere of Jump to Cow Heaven at Profiles Theatre, And Then They Came For Me at Apple Tree Theatre, and was associate director of the award winning world premiere of Hannah & Martin at TimeLine Theatre.  Golob was also a member of Naked Eye Theatre Company, where he assistant directed the Jeff Award winning production of Waving Goodbye, in a co-production with Steppenwolf.  He has also directed at Pegasus Players, Stage Left Theatre and Chicago Dramatists.  Mitch holds a Bachelor of Arts in Theatre & Drama from the University of Wisconsin.

ABOUT JEFFEREY THOMAS, music director
Jefferey Allen Thomas is a composer and guitarist.  He is a founding member of Mucca Pazza, and has worked with Greek composer Michael Karras, Punk legend Excene Cervenka, Cynthia Plaster Caster and Bobby Conn. He has written incidental music for Redmoon Theater, Chicago Shakespeare Theater and the Neo-Futurists, as well as dozens of independent films.  His current project is a group of symphonies called “The Work of Jack Daedalus Edwards”.  The first of these symphonies, “Rumour, “premiered at the Museum of Contemporary Art Chicago in February 2014.

ABOUT HEIDI RODEWALD, composer
Heidi Rodewald is the Tony Award nominated, Obie Award winning co- composer of the musical Passing Strange, which transferred from The Public Theater to Broadway in 2008. She is a Sundance Institute Alum and the co-writer with Stew of the screenplay "We Can See Today". Rodewald composed music for Karen Kandel's Portraits: Night and Day (2004); Brides of the Moon by The Five Lesbian Brothers (2010) and co-composed music with Stew for Shakespeare’s Othello, Much Ado About Nothing and Romeo and Juliet (2010-12). Rodewald joined the band The Negro Problem in 1997 and has collaborated with Stew in a range of capacities: as a co-composer, producer/arranger and performer. She is the co-composer with Stew of the new musical Family Album, which premiered at the Oregon Shakespeare Festival last summer. She is also the co-composer of their new musical, The Total Bent, which will open in 2015 at the Public Theater. She has two new projects which have been in development at the Eugene O'Neill Theater Center and the Center for the Art of Performance at UCLA: The Good Swimmer, a pop-opera, co-written with librettist, Donna DiNovelli and The Stacks, a two-person musical co-written by singer- songwriter Mary McBride. She just finished scoring her first film "I Dream Too Much", written and directed by Katie Cokinos.

ABOUT CAROLINE DORSEN, co-lyricist
Caroline Dorsen is an award winning writer, poet and educator who lives in Brooklyn, NY. A ghost writer for numerous late 1980s/early 1990s bands in the Bay Area, Another Kind of Love marks the first time Dorsen has allowed her name to be linked to her lyrics. She brings to the project an extensive knowledge of the psychology of trauma, loss and addiction. Her experience working in this area is reflected in the authenticity and emotional resonance of her lyrics.

ABOUT INFUSION THEATRE COMPANY
InFusion Theatre Company seeks out new plays and “infuses” them with other elements of entertainment such as music, dance and film. “We strive to create dynamic performances by combining different forms of entertainment that will result
InFusion Theatre Company’s Crystal Skillman’s Another Kind of Love, May 10 – June 14, at The Chopin Theatre, 1543 W. Division Ave. Preview performances are Sunday, May 10, Monday, May 11 and Thursday, May 14 at 7:30 p.m. with the opening/press night Friday, May 15 or Saturday, May 16 at 7:30 p.m. Performances are Thursdays - Saturdays at 7:30 p.m. and Sundays at 3 p.m. Preview tickets are $14. Tickets are $28 for general admission, $20 for seniors and $15 for students and industry professionals (Thursdays and Sundays only). Tickets are on sale now at InFusionTheatre.com.

Posted by Bonnie Kenaz-Mara at 3:22 PM