Here at ChiIL Live Show, we were first introduced to Chekhov's profound and prolific stylings in college in the 80s and we've been ardent admirers since. Don't miss the final production of The Hypocrites' 2014-15 season, one of Anton Chekhov’s later comedies, THREE SISTERS, directed by Company Member Geoff Button*, playing April 17 – June 6, 2015 at their new home, The Den Theatre Mainstage, 1329-1333 N. Milwaukee Ave. in Chicago. Tickets are available at www.the-hypocrites.com. 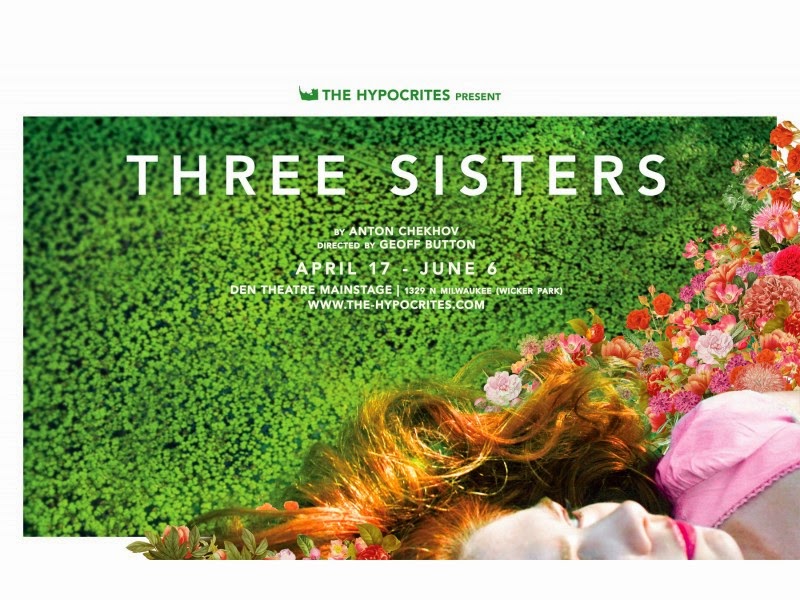 The Hypocrites explore the absurd, existential comedy of Chekhov’s Prozorov sisters, whose daily lives in a drab provincial town pale in comparison to their imagined futures in the big city. Director Geoff Button follows the gradually building devastation that results from the sisters’ comic missteps.
“I’m particularly drawn to Three Sisters because I think it’s about the ways in which we’re all culpable for our failed hopes,” comments director Geoff Button. “I don’t see three women lazily pining for Moscow, I see them constantly taking action, just in pursuit of all the wrong goals. Life in Three Sisters is determined not by the characters’ big picture dreams, but by all the petty decisions and daily frustrations that steer them off course,” adds Button.

Performances of "The Three Sisters" begin April 17 and continue through June 6.
Both shows play The Den Theatre, 1333 N. Milwaukee Ave.

About the Director
Geoff Button is a longtime company member of The Hypocrites and directed their productions of Into the Woods, Coriolanus, Desire Under the Elms and True West (Non-Equity Jeff Nominations – Best Play, Best Director). He received his MFA in Theater Directing from Northwestern University, where he directed Angels in America: Millennium Approaches, The Who’s Tommy and Spring Awakening. Around Chicago he’s directed at Mary Arrchie (Harold Pinter’s The Homecoming), Strawdog (State of the Union), Depaul University (I Am Bradley Manning by Sarah Gubbins), North Park University (Urinetown) and the Side Project (Sean Graney’s Sugarward). Also an actor, he has performed in several Hypocrites’ productions, including Sophocles: Seven Sicknesses, Woyzeck, Mud, Balm in Gilead and Equus (Non-Equity Jeff – Best Actor).

About The Hypocrites
Founding Artistic Director Sean Graney* created The Hypocrites in 1997. It is currently run by Artistic  Director Halena Kays* and Managing Director Megan Wildebour*.  The Hypocrites are recognized as groundbreakers that defy the audience’s expectations. The company has grown significantly in the past few years, receiving acclaim for productions at the Steppenwolf Garage, Goodman Theatre, Museum of Contemporary Art, DCASE Storefront and Chopin Theater before moving to a residency at The Den Theatre Mainstage. The company’s smash-hit production of Our Town, directed by David Cromer, transferred in 2009 to Off-Broadway, Los Angeles and Boston. The Pirates of Penzance has appeared at Actors Theatre of Louisville and American Repertory Theater (A.R.T.). A.R.T. has also brought Romeo Juliet, 12 Nights and The Mikado (forthcoming). The American Theatre Wing, best known as the creator of the Tony Awards, presented The Hypocrites with one of the 2013 National Theatre Company awards in 2013. In June 2015, the critically acclaimed All Our Tragic, a 12 hour play adapting the 32 surviving Greek tragedies, will return. For more information, please visit www.the-hypocrites.com.

+Denotes The Hypocrites Artistic Associates
Posted by Bonnie Kenaz-Mara at 8:37 AM