Here's your cute, baby animal pix fix for the weekend.  It's been our great pleasure to raise 3 adorable baby Guinea Pigs from birth. 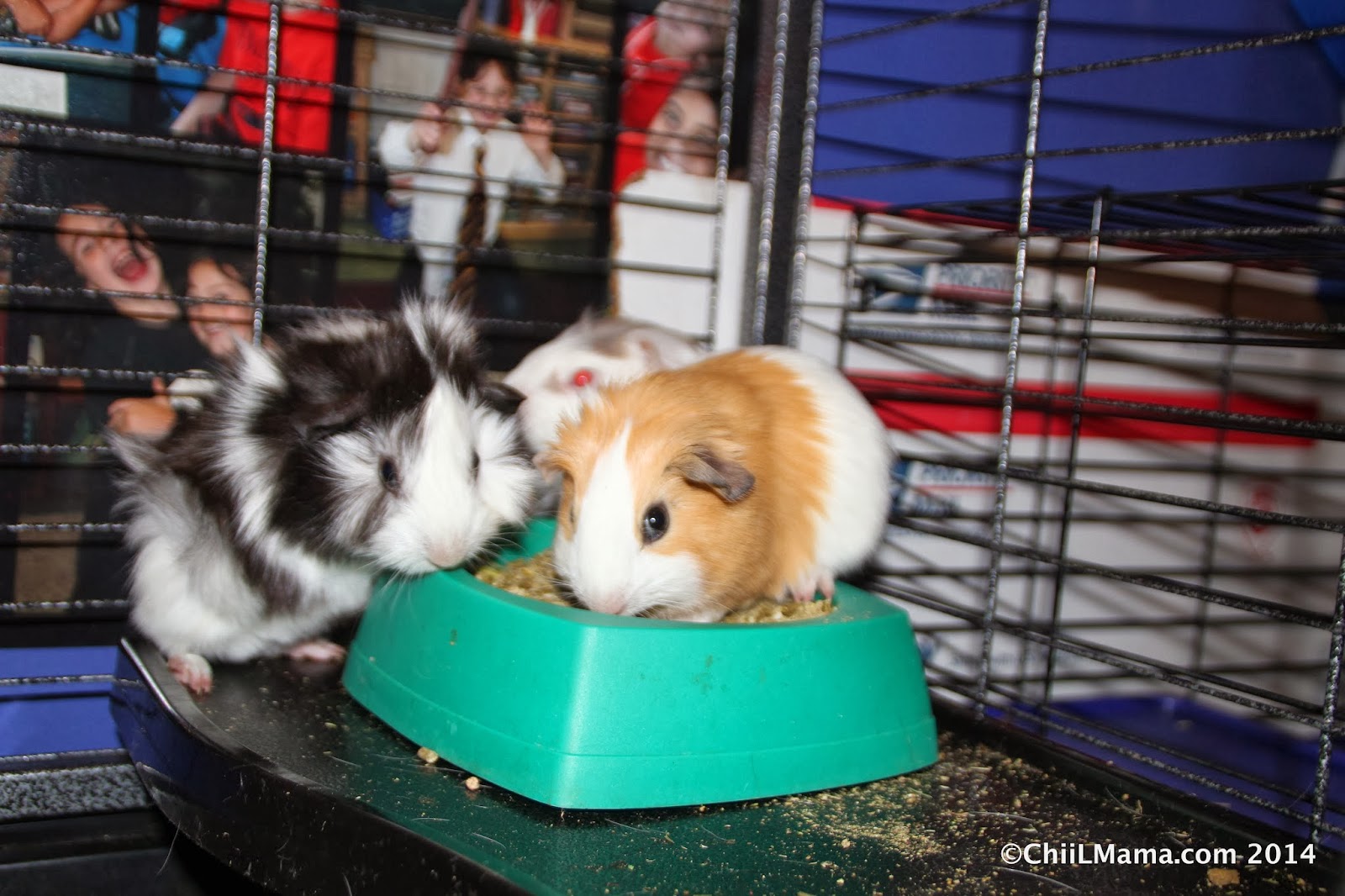 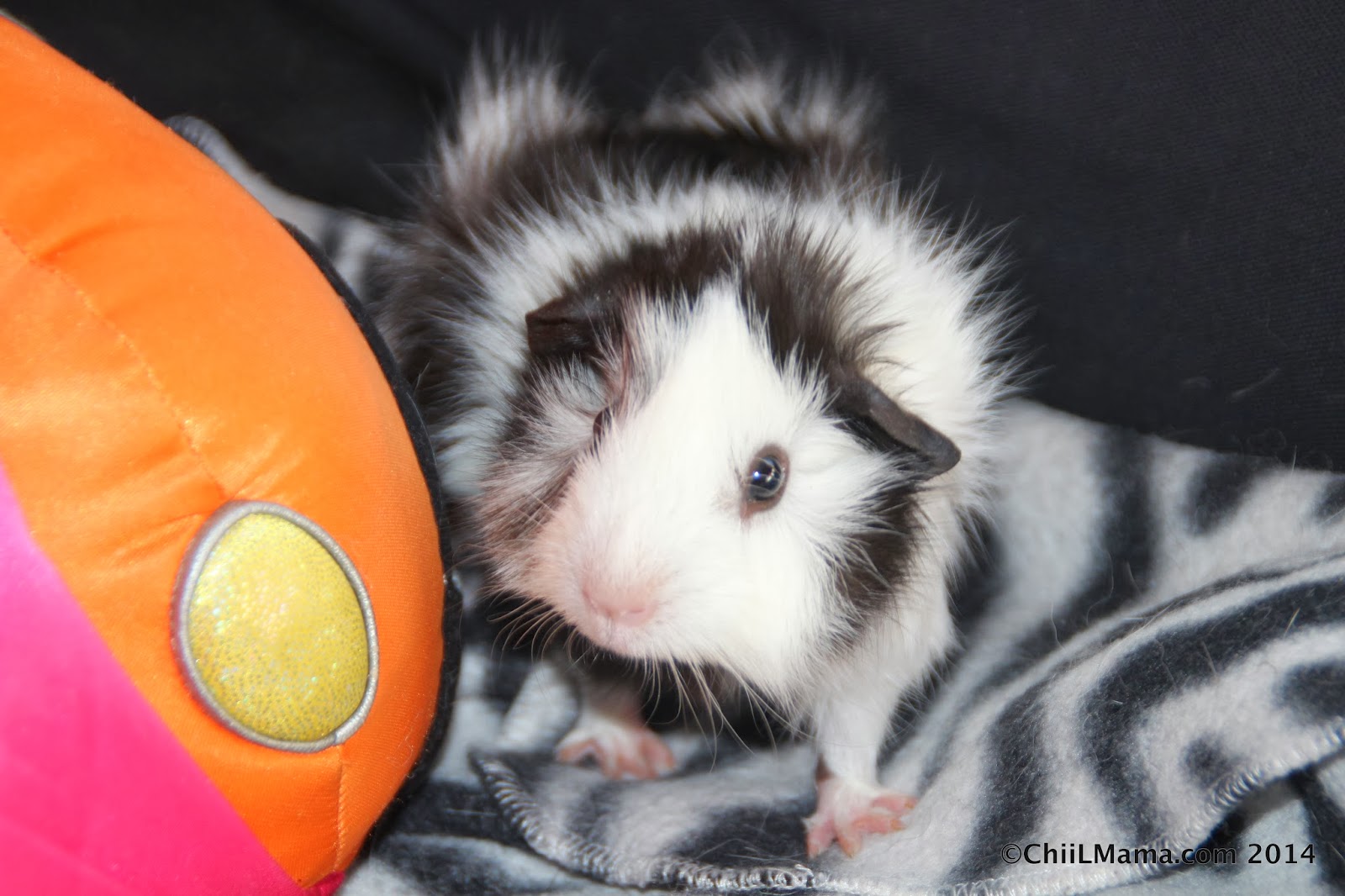 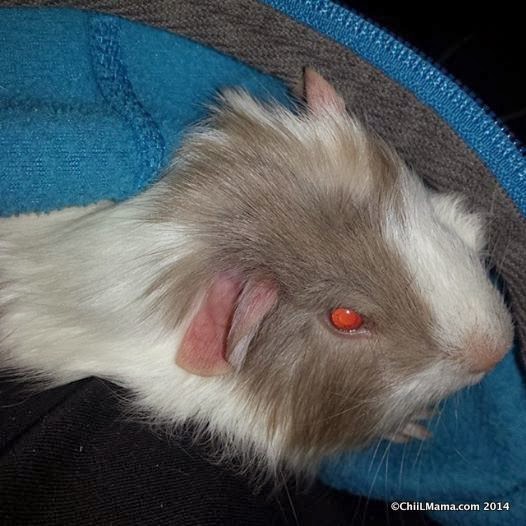 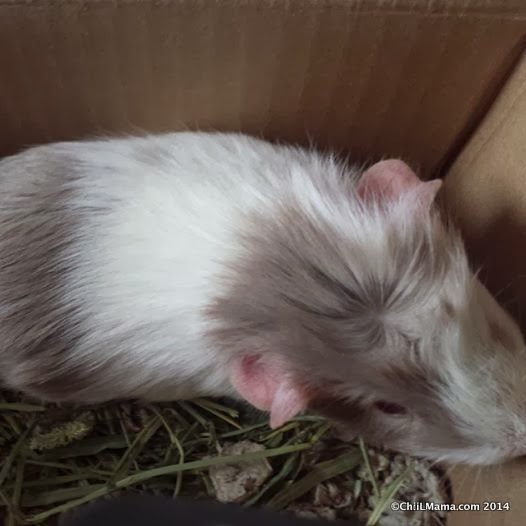 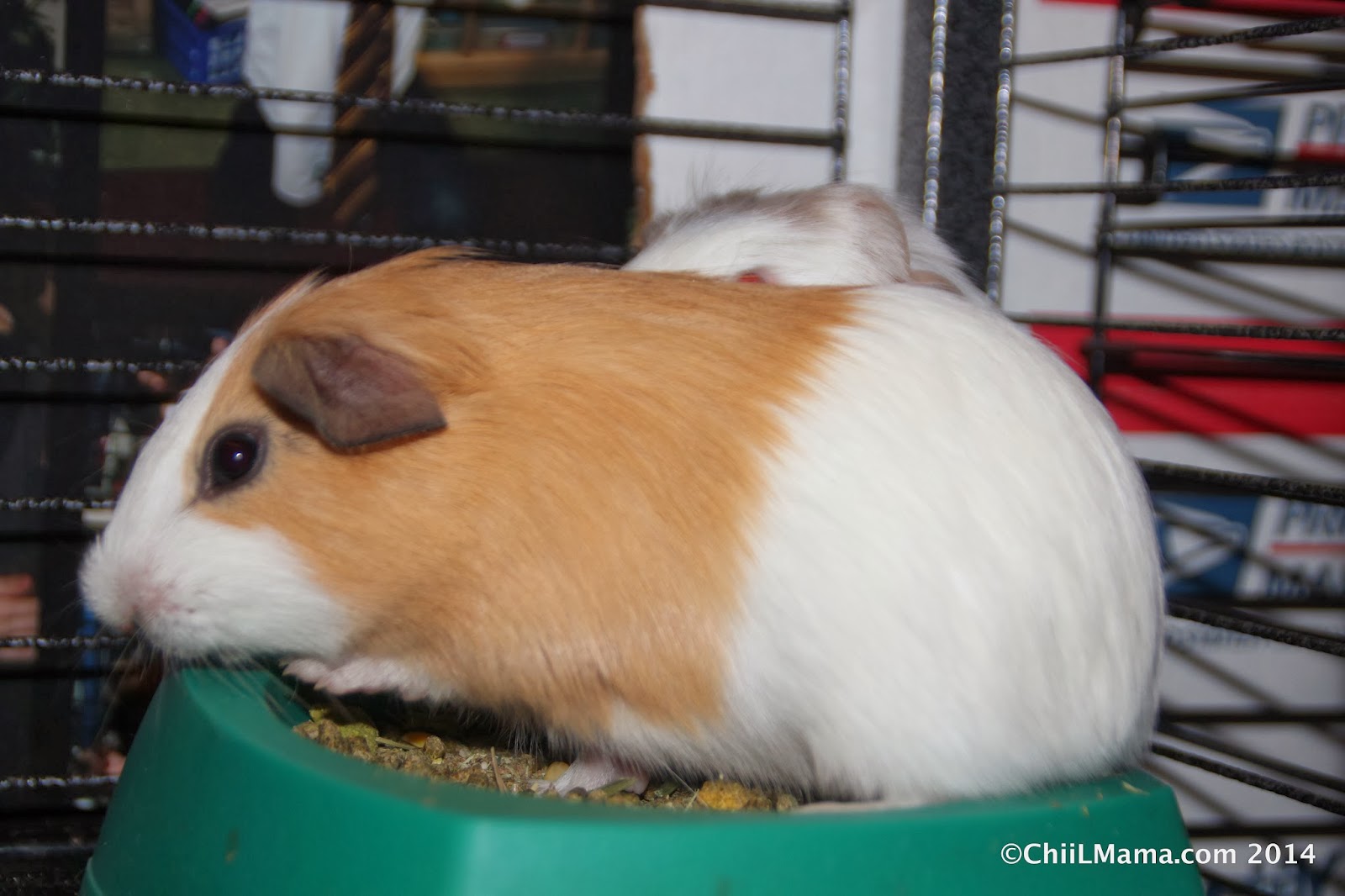 Click here for our past coverage on the Cavy Babies.

We're keeping Cheekum (kids' choice) and her mother, Bweep, and big sister, Brave. Sage was vocally wishing throughout the pregnancy for an orange girl to keep who would resemble Cheekums from one of their fav TV shows, Gravity Falls.  She got what she wished for!

Since we were maxed out with 3 Guinea Pigs, 2 big dogs, and fish, we found new homes to adopt Charlie and Vortex this week.  I hadn't expected it to be soooooo hard for the kids to give up the babies.  They've been through the deaths of pets before with more of a stoic response. 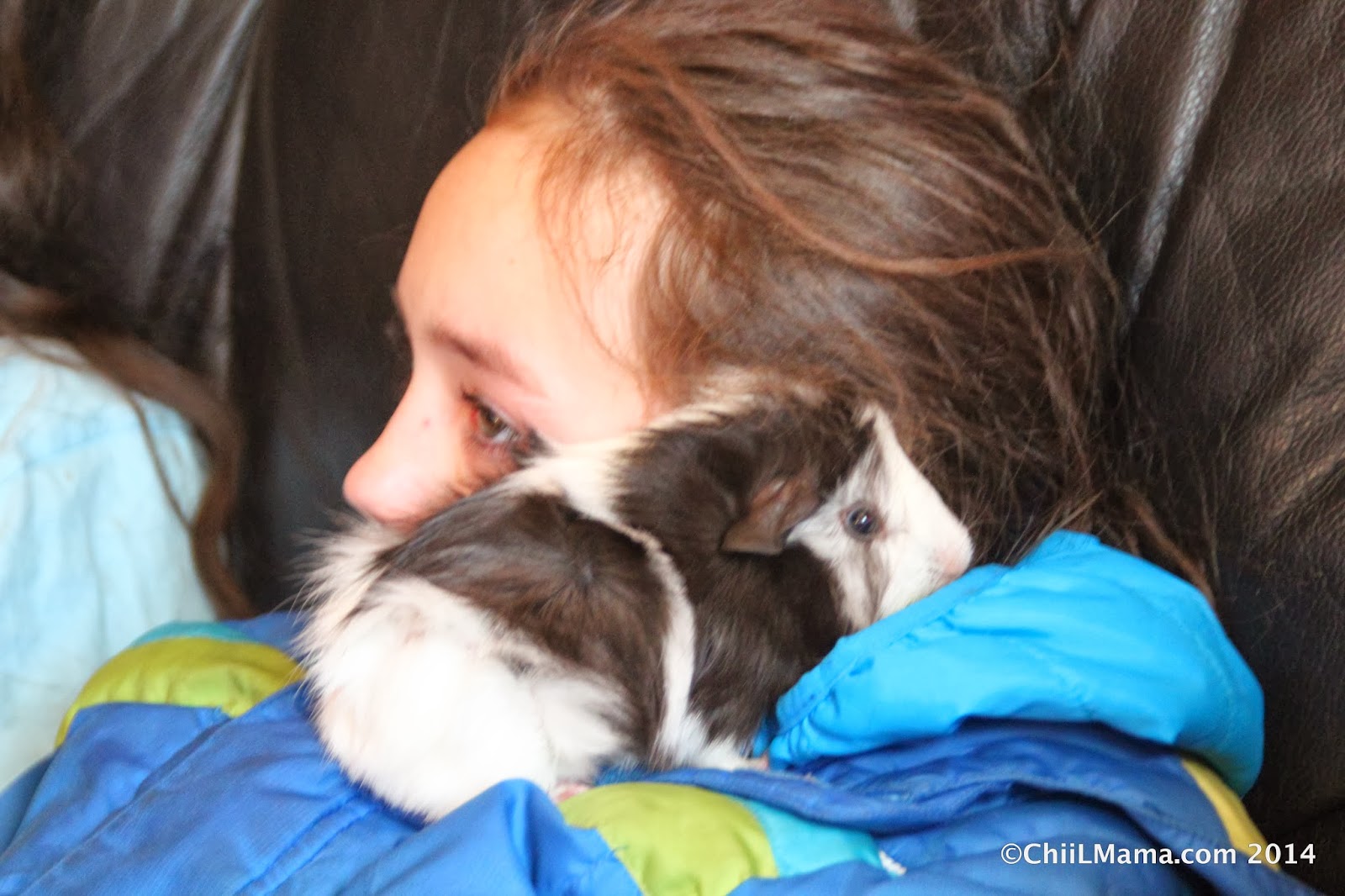 Sage (10) cried for hours after we dropped Charlie off with a gymnastics teammate of hers. Vortex may be renamed Retro and he'll be hangin' with a couple of awesome homeschooler sisters. 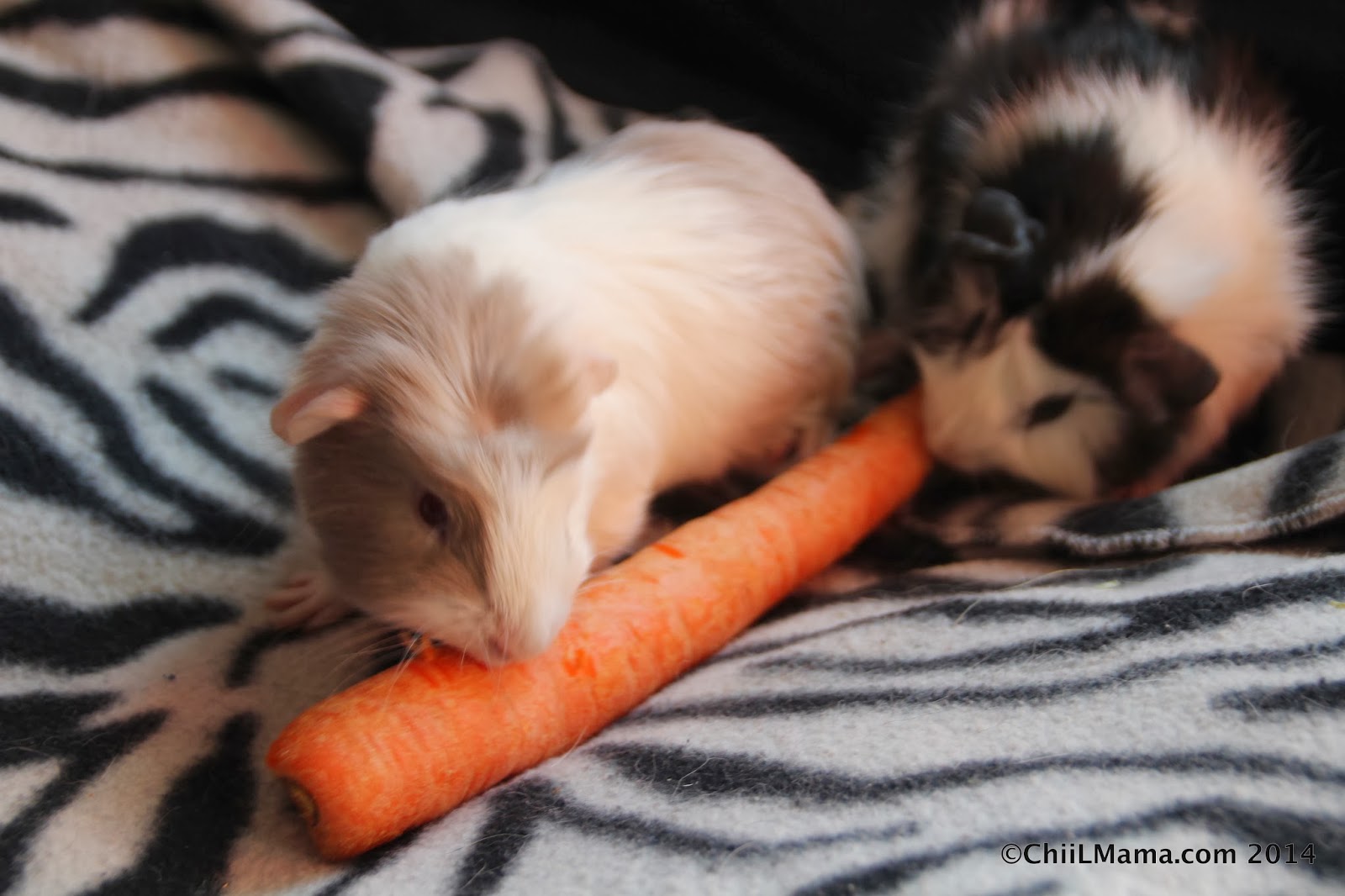 I was sad to see 'em go, too, (Charlie was my favorite).  I had a black n white Guinea Pig named Charlie as a kid, that my mom gave away to a school class because she thought I wasn't cleaning him often enough.  I cried & when I asked to go visit him a month later she said he'd caught a virus in the class and died!!  I was devastated.  My own kids named the little black n white girl Charlie after my childhood cavy.

I was sad to have to give up Charlie Guinea Pigs TWICE, but I'm very happy we found loving, kid filled homes for them, instead of having to sell to strangers and wonder how they're being treated.  That's a relief!  Hopefully Charlie #2 will live a long and lovely life. 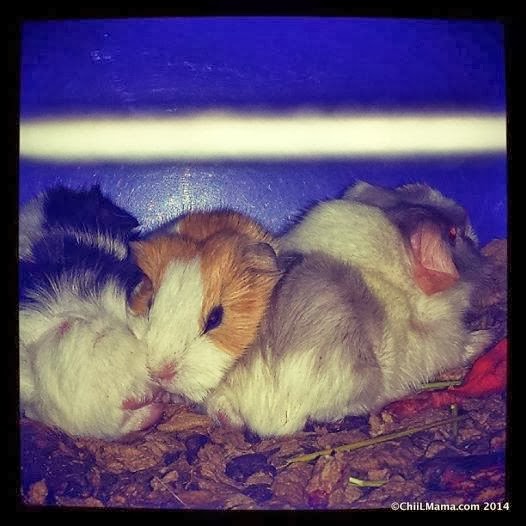 The whole accidental litter thing was a deja vu to my own childhood when my sister's albino mouse unexpectedly gave birth to a bunch of little, blind, naked babies.  They were so small at birth all 5 fit in the palm of my hand.  We had a blast playing with them in the doll house & driving them around in our Honey Hill Bunch Cart.  Here's my sister with our mice in 1980.  We named them Hickory, Dickory & Doc, Estella & Evangeline. 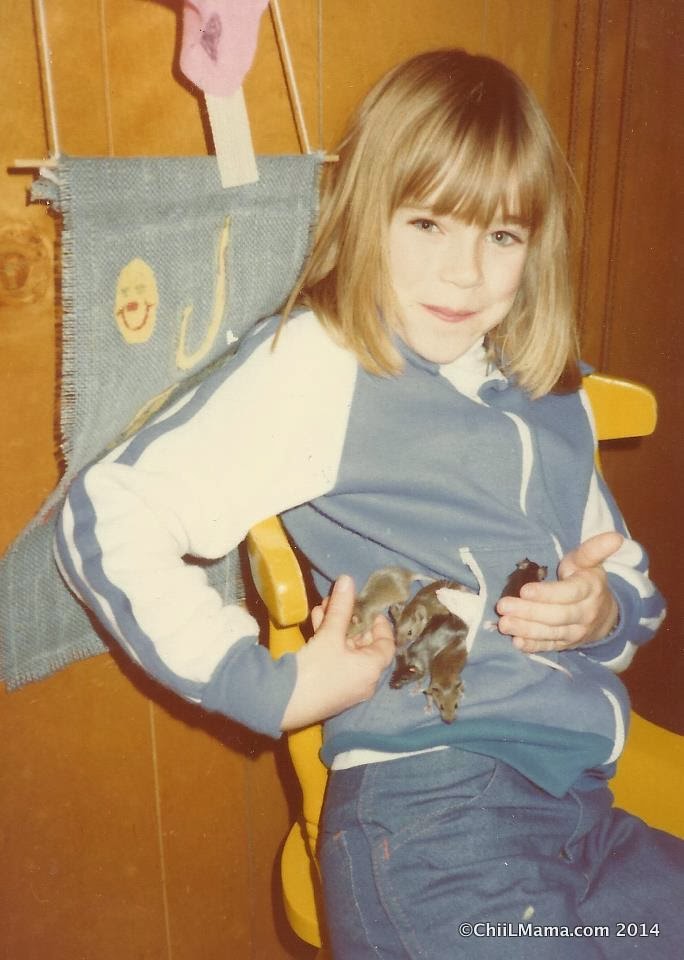 We bought 2 Guinea Pigs as a Christmas gift for Sage and didn't know our Guinea Pig mom was expecting when we got her.  They nurse for 3 weeks then start right into sexual maturity, and the moms can get knocked up right after birth and have a litter of 2-7 in 2 months!  The babies are relatively huge & hairy at birth and have their eyes open.  #GladI'mNotAGuineaPig

Newborn Guinea Pig in relation to a Brussels Sprout: 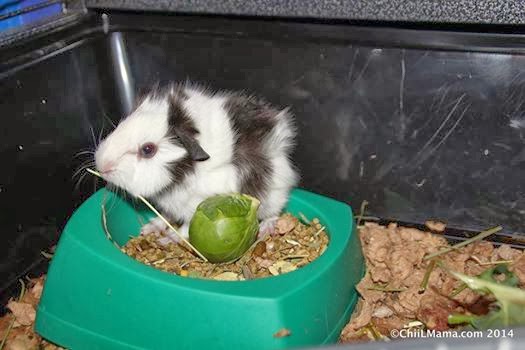 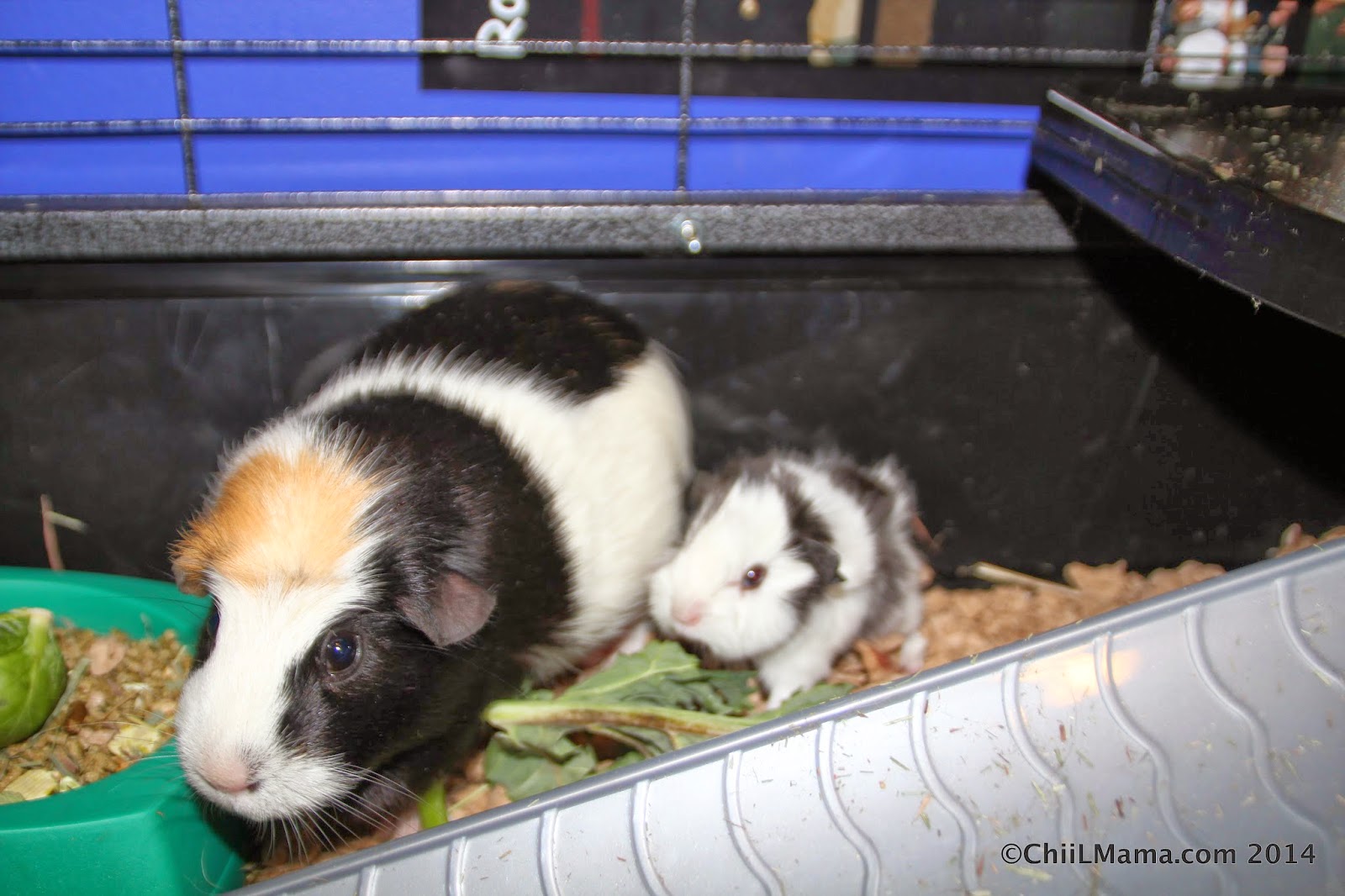 They nurse 3 weeks but start solid food at 2 days & are remarkably self sufficient. It was a great experience for the kids, nurturing the babies and researching diet and care.  The cavy babies were better than my kids about eating kale, Brussels sprouts, and carrots for the high vitamin C content.  They make awesome pets and love to snuggle up with people.  Downside: they do poop and pee a LOT, and will do it on YOU if you're holding them, so a towel under them is helpful. 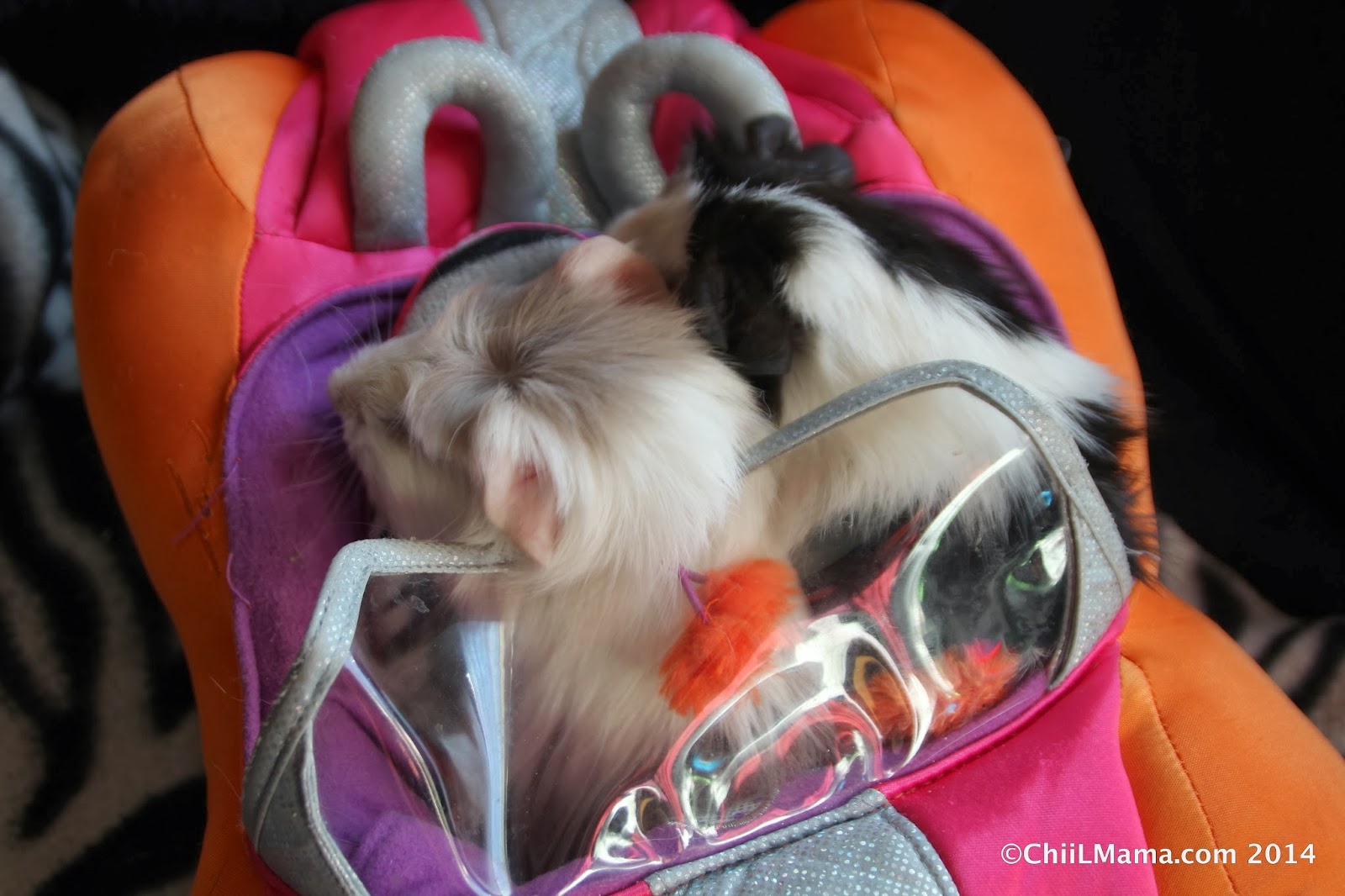 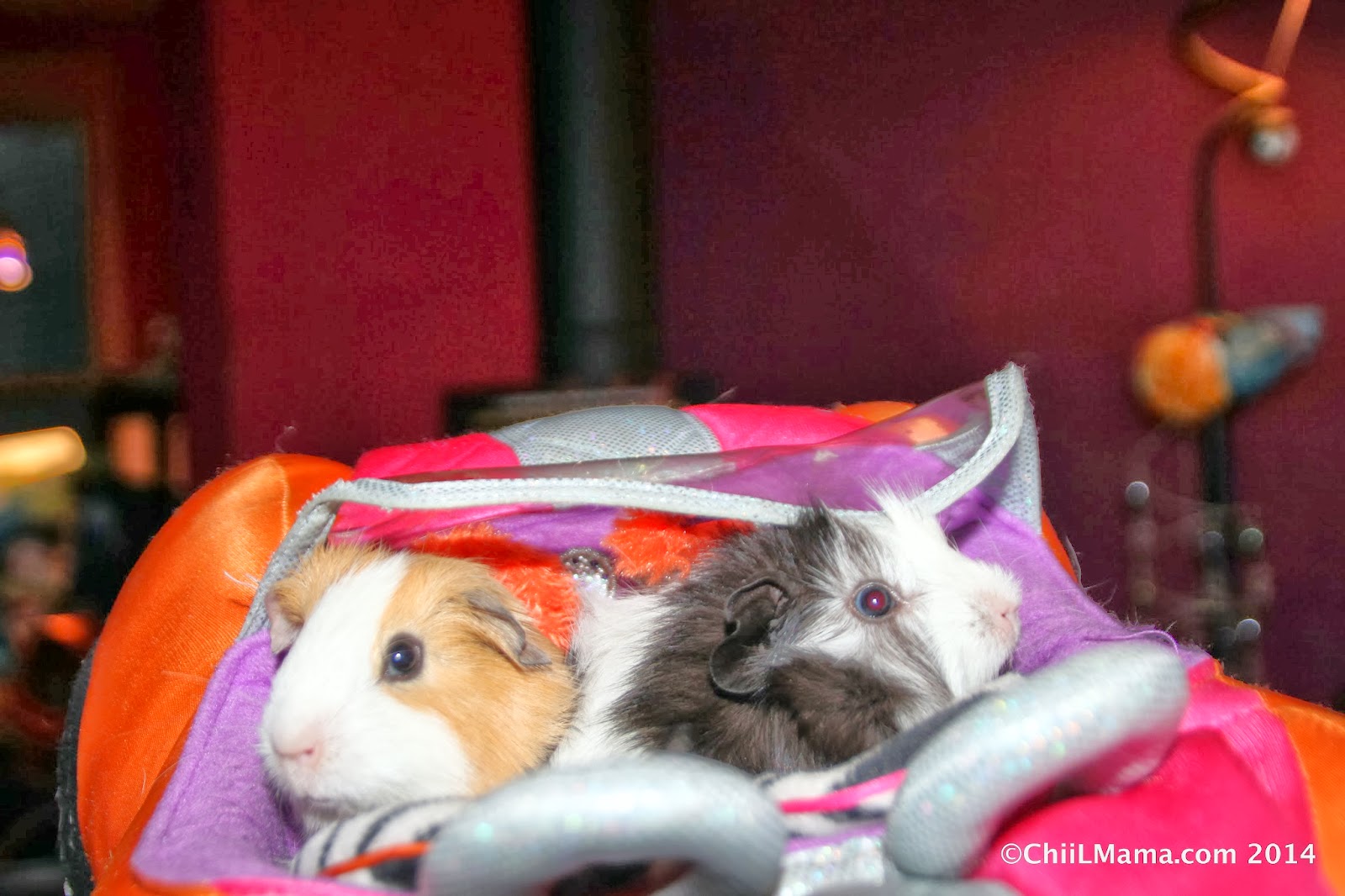 Upside: They make adorable squeaks and purring noises, are quite affectionate, and are patient when kids put them in toys cars, armor and whatnot.  If you can put up with a bit of Timothy Hay mess, and don't mind doing a weekly cage cleaning, we highly recommend them as pets. 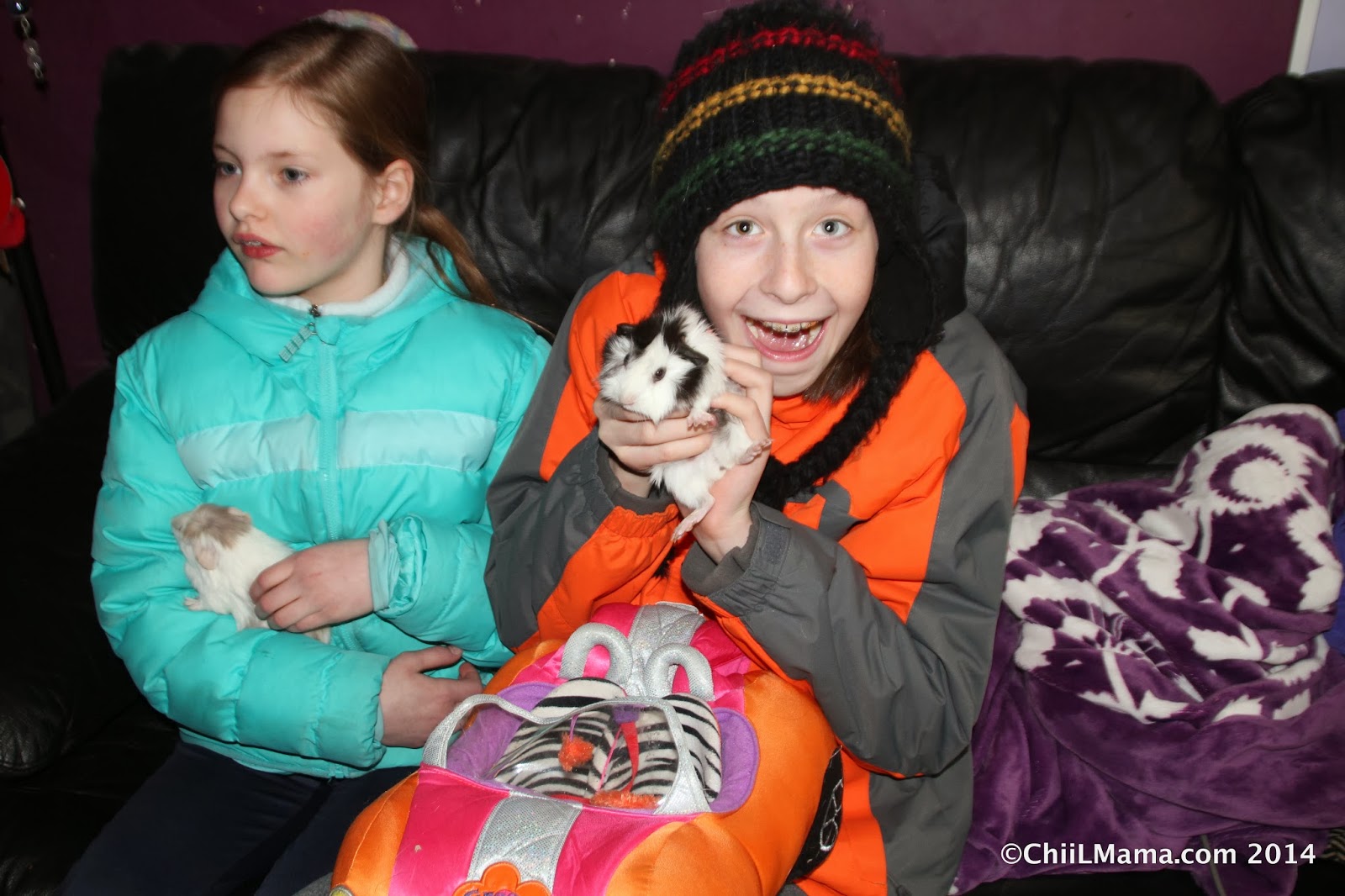