ACT OUT CLOSING: The Little Prince at Lookingglass Must Close 3/16 #review #KidsReview

It's been Extended & Highly Recommended,
but now it's days are numbered. Don't miss out. Go already!

Make your reservation today! The Little Prince has been extended twice by popular demand, but must close March 16, 2014. Don't miss the chance to experience the story based on the classic French novella highly recommended by the Chicago Sun-Times.

**Written for adults, but fine for savvy 6+/95 minutes--no intermission, soooooo leave the littlest littles at home for this one. There's nothing scary or wildly inappropriate for all ages, but make sure your child is mature enough to sit for an hour and a half without a break when considering this show.** 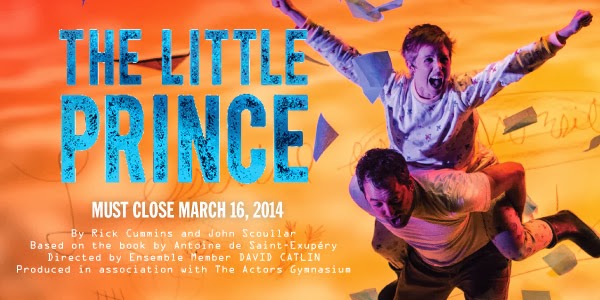 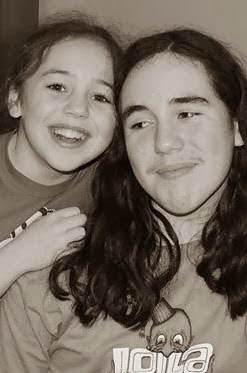 We liked the set a lot because it was basically a giant, 3 dimensional piece of paper, like a slide & the actors drew on it & played under and over it. 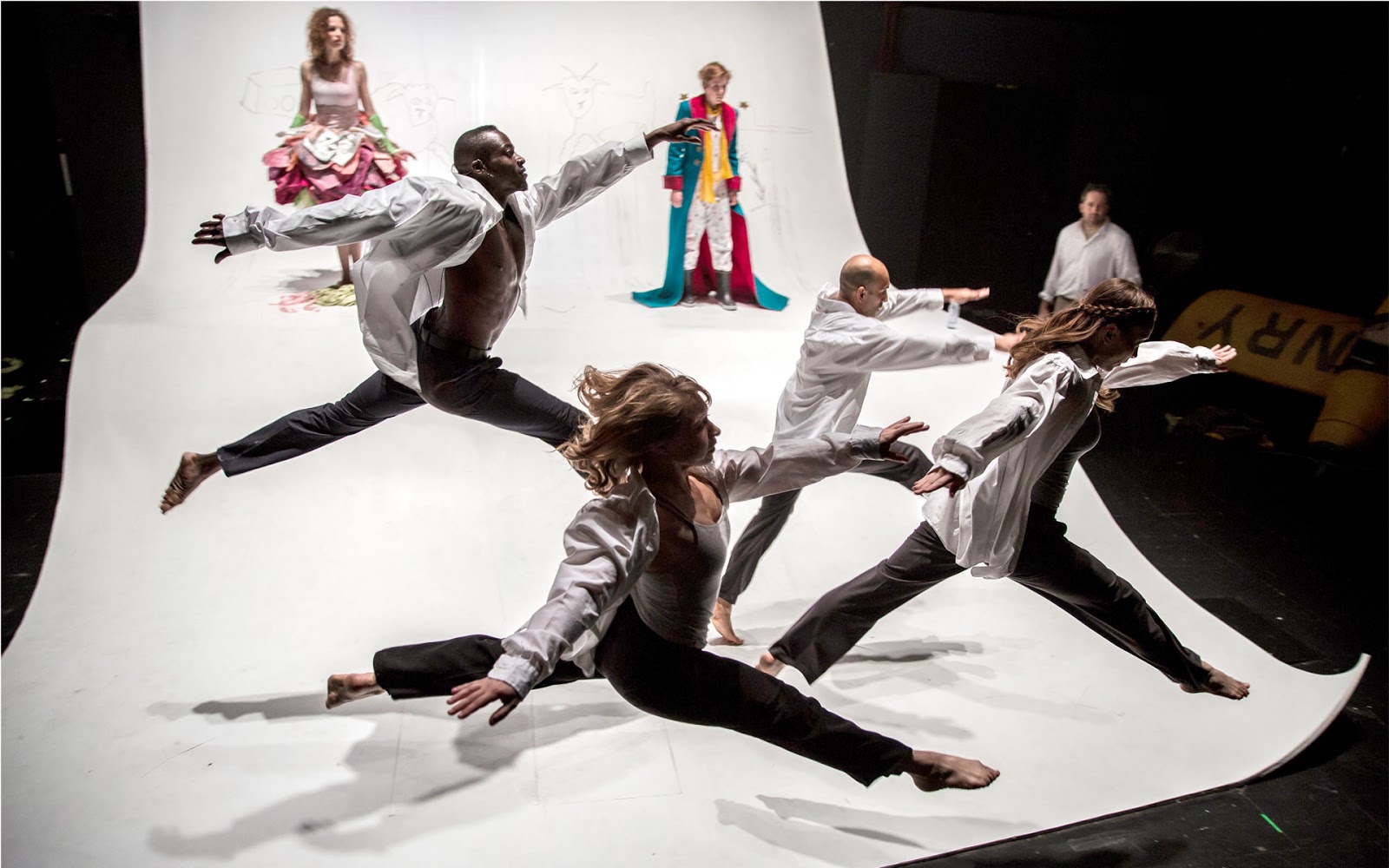 The Little Prince is really written for adults, but good for all ages, except very little kids who can’t sit still that long without an intermission.  There was a huge mix of ages from kids to grandparent aged people on opening night and there was a lot of smiling.   We thought there could have been more circus arts incorporated, but the drunk on the globe was great and we really liked the strap aerialist.
Our Take
The theme is accept differences.  The guy with the plane that crashed thought it was all about him, then he met all kinds of other people and places in the universe.  The Little Prince learned lessons about love and caring through his flower.

We liked it a LOT and recommend checkin' it out. 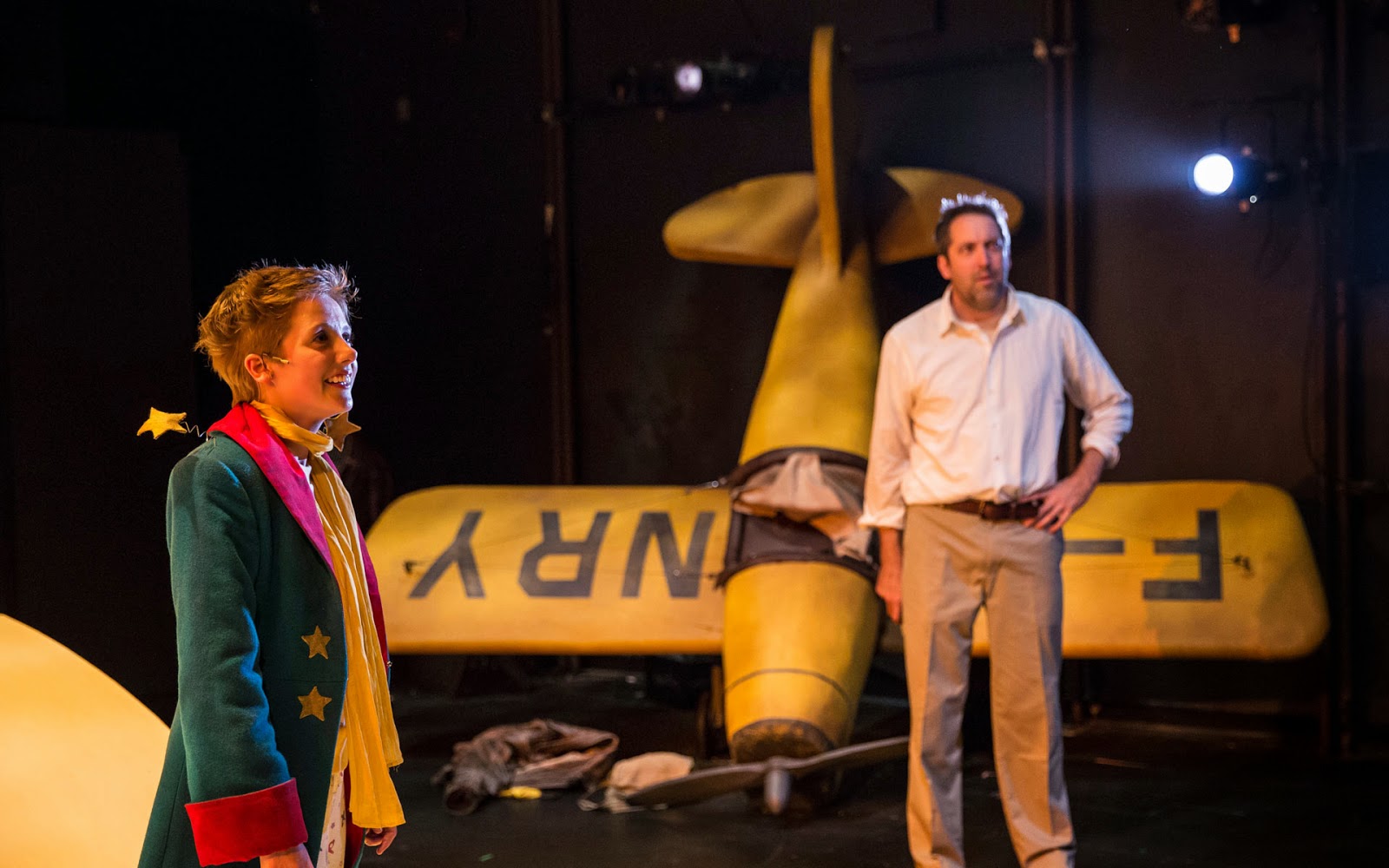 The Little Prince was a shoe in for ChiIL Mama's ChiIL Picks List for Best Family Friendly Theatre Productions.  We adore circus arts, particularly when they advance and enhance a plot. We also love book based theatrical adaptations.

Lookingglass Theatre consistently impresses and we've long been fans of David Catlin's work on stage and pulling the strings as director.  So, to say we had high expectations for The Little Prince would be an understatement.  I'm thrilled to say we were more than impressed.  This production gets it right. The content and depth is there, but the playful overtones, and visually stunning costumes, sets, and props keep the production from being heavy handed and make it amusing and entertaining. This is one of our current favorites for creative set design as well as stellar acting, creative use of aerial and circus arts.  Click here for our prior coverage. 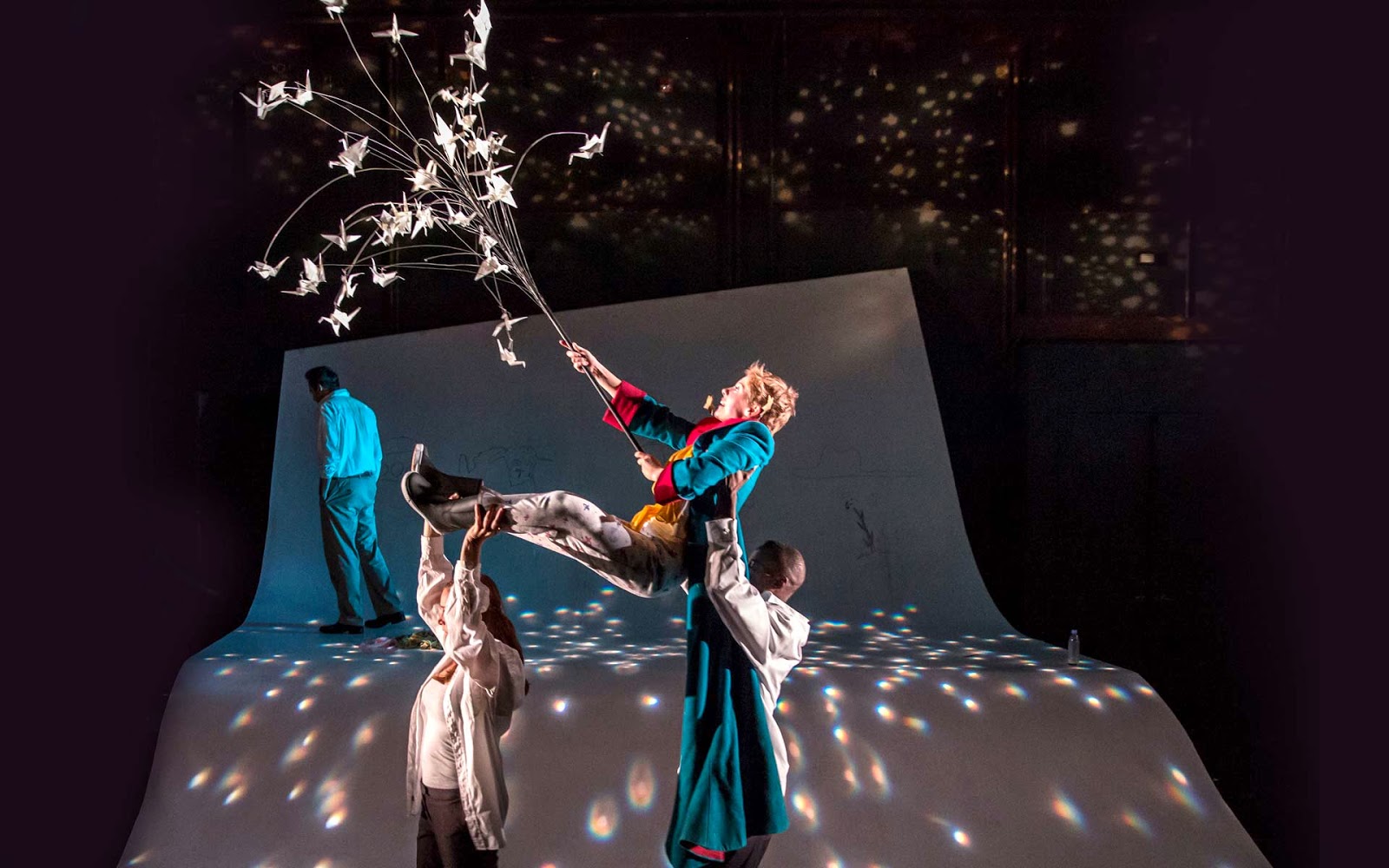 Lookingglass Theatre Company's hit production of The Little Prince, is produced in association with The Actors Gymnasium, by Rick Cummins and John Scoullar, based on the book by Antoine de Saint-Exupéry, and directed by Ensemble Member David Catlin. The show now runs through Sunday, March 16, 2014 due to overwhelming demand.

The Little Prince runs at Lookingglass Theatre Company, located inside Chicago's historic Water Tower Water Works, 821 N. Michigan Ave. at Pearson.
Stuck, thirsty and alone. A pilot stranded in the Sahara Desert meets an enigmatic, charismatic young prince fallen from the sky who regales him with tales of life among the stars: tales with earthly importance.  In this visually arresting, fully immersive theatrical interpretation of the beloved French novella, director David Catlin (creator of Lookingglass Alice) illustrates the story with fantastic characters and gravity-defying, awe-inspiring physical feats. The Little Prince speaks – in breathtaking splendor – to the castaway in all of us: challenging our perspective, opening our eyes and bringing us back to the heart of what truly matters.

"Everyone who saw and thrilled to David's Lookingglass Alice will remember his penchant for creating stories that are full to bursting with spectacles of pure delight and inventiveness, “ says Artistic Director Andrew White. “He brings all of that unmatched creativity and passion to this internationally beloved story, creating a show that truly will appeal to audiences of all ages -- to parents as well as their kids, to grandparents and grandchildren, to anyone who, as David puts it, has found themselves at some point in their lives stuck, thirsty and alone - and who hasn't?"

“I love The Little Prince because it has something for all ages.  Kids will dig the strange characters and the intergalactic story.  Teens and college kids will connect with the impending responsibility of becoming a grown-up.  And grown-ups will identify with our lonely Aviator who crashes in the Sahara Desert a thousand miles from anyone and anywhere with barely enough water for a week,” comments director David Catlin. “In this crisis, our Aviator needs the wisdom of a child—a Little Prince—to remember that ‘what is essential is invisible to the eye’ and the importance of cultivating ties with others.”

The production sponsor for The Little Prince is Allstate, which is also the sponsor of the Education Programs for the production.

Lookingglass Theatre is located in the heart of the Magnificent Mile shopping district inside Chicago's historic Water Tower Water Works, 821 N. Michigan Ave. at Pearson.  Discounted parking is available for Lookingglass patrons at both the nearby John Hancock Center and Olympia Centre Self Park (161 E. Chicago Ave.).

ABOUT THE ARTISTS
David Catlin (Director/Ensemble Member) Recent Lookingglass directing credits include:  Icarus, Lookingglass Alice, and Black Diamond (with Nicky Brooks).  Regional directing credits include: McCarter (Princeton, NJ),  Arden (Philadelphia), The New Victory (NYC), Syracuse Stage, Actors Theater of Louisville, the Alliance (Atlanta) and the Getty Villa (Los Angeles).  Other recent directing credits include:  The Musical Adventures of Flat Stanley (NU), The Little Prince (NU), and The Monster Under the Bed (Depaul).  David teaches acting with Northwestern University’s theatre department and will direct Moby Dick there in April 2014. David lives in Chicago with his wife Kerry and their two daughters Emerson and Saylor.

Adeoye (Lamp Lighter) returns home to Chicago and to Lookingglass with The Little Prince. He most recently appeared in Optimism! Or Voltaire’s Candide at Spooky Action Theater in Washington DC. Other DC credits: All’s Well That Ends Well and The Atheist’s Tragedy at The Academy for Classical Acting at The Shakespeare Theatre and The George Washington University, where he earned his MFA.  Previous Lookingglass credits: Peter Pan, Lookingglass Alice, Icarus and Black Diamond. Other Chicago credits: The Unmentionables (Steppenwolf Theatre), The Lost Boys of Sudan (Victory Gardens Theater). Regional credits: A Raisin in the Sun (Guthrie Theatre/Penumbra Theatre,) Intimate Apparel (Clarence Brown Theatre). Television credits: “Detroit 1-8-7,” “Leverage,” “Prison Break.” Film credits: #Vengeance is Mine. 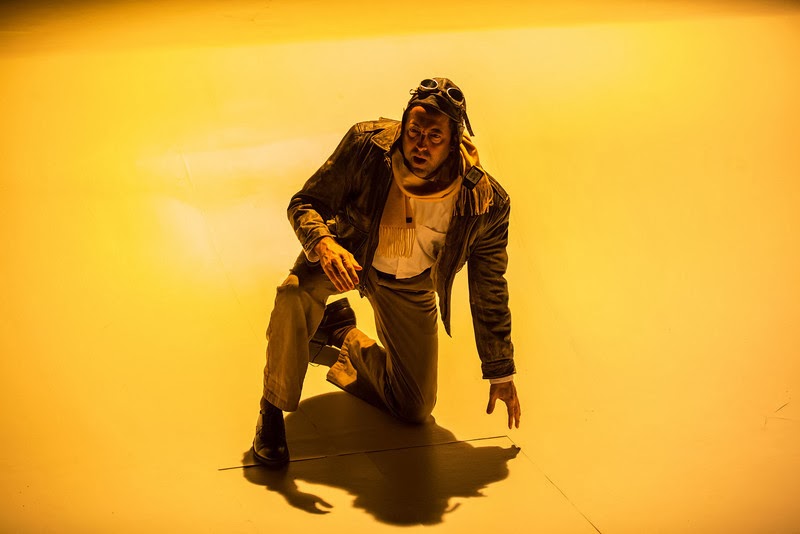 Ian Barford (Aviator) makes his debut with Lookingglass Theatre.  Most Chicago appearances have been with Steppenwolf where he is an ensemble member.  Some favorites there include: August: Osage County (original company, Broadway and the National Theater in London), The March (Jeff nom. for best supporting actor), Endgame, The Libertine, As I Lay Dying and The Rise and Fall of Little Voice (Broadway, Outer Circle critics nom.) and many others. Love Song at 59E59 in NYC.  Originated the role of Dr. Khassan Baiev, a Chechen surgeon, in The Oath based upon his autobiography.   In Los Angeles, The Weir, God’s Man in Texas and Take Me Out at the Geffen Playhouse. Dead End at the Ahmanson. All The Rage and Design for Living at the Goodman. Othello at Chicago Shakes. National Tour of Picasso at the Lapin Agile.  Soon to be released films include: Shreveport, Return to Sender. Other Films: Road to Perdition, 13 Going on 30 and others. Numerous TV appearances.

Kasey Foster (Fox) has performed with Chicago Children’s Theatre, Redmoon, Dog n Pony, Trap Door, Theater Wit, Red Tape, and Collaboraction. She sings with local bands: This Must be the Band, Grood, and Old Timey. Foster co-produces The Monthly Visit with Kevin O’Donnell, and has choreographed and directed over thirty original works since her Chicago arrival in 2004. One of her favorite projects to produce and choreograph is a series called Dance Tribute, which takes place twice a year at Martyrs’ on Lincoln Ave. 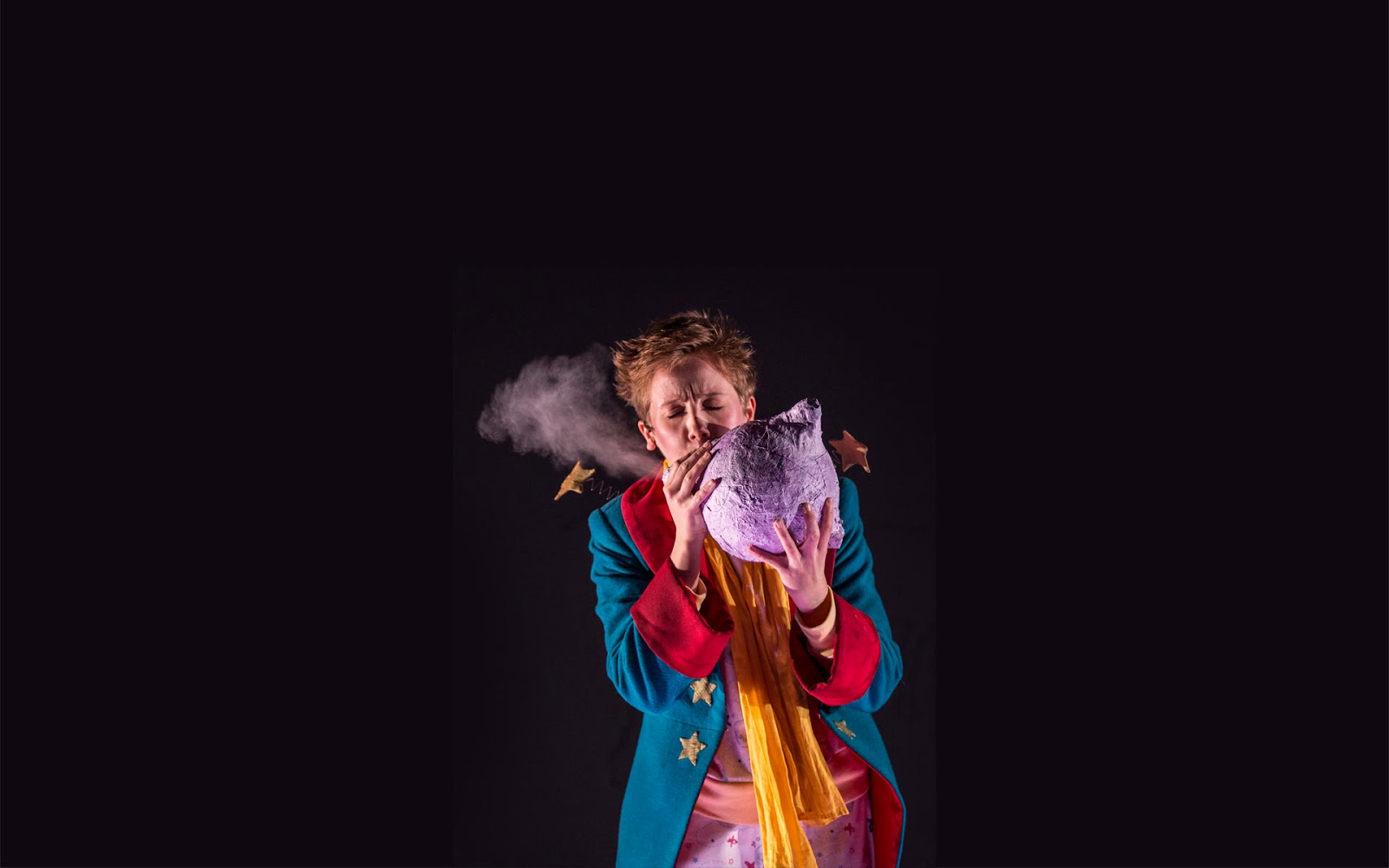 Amelia Hefferon (Little Prince) makes her professional debut with The Little Prince. Amelia is a Michigan native and a recent graduate of Northwestern University where she studied theatre and art history.

Lauren Hirte (Desert Rose) is an Artistic Associate returning to Lookingglass with The Little Prince, where her credits also include: Alice in Lookingglass Alice, Icarus, Fedra, Hephaestus, and Hard Times. Regional credits: Actors Theatre of Louisville, Arden Theatre, McCarter Theatre, The New Victory, and most recently as the title character in Milwaukee Rep’s The Diary of Anne Frank. She has studied, taught and performed at the Piven Theatre, and at the Actors Gymnasium. Recently, Lauren has been living in LA, and spent the summer with Steppenwolf West at CSU Summer Arts in Monterey Bay, CA.

Louise Lamson (Rose) is an Artistic Associate of Lookingglass Theatre where she has been seen in The Idiot, Hard Times, The Secret in the Wings, The Wooden Breeks, Icarus (at the Getty Villa, L.A.), The Brothers Karamazov, Our Town, The Arabian Nights, Ethan Frome, and most recently Metamorphoses. Some other Chicago credits include: About Face Theatre’s Bash (After Dark award and Jeff nomination); The Odyssey (Goodman); and The Adventures of Herculina (Next Theatre). New York credits include: Metamorphoses (Second Stage and Broadway) and The Notebooks of Leonardo da Vinci (Second Stage). Louise is a graduate of Northwestern University. 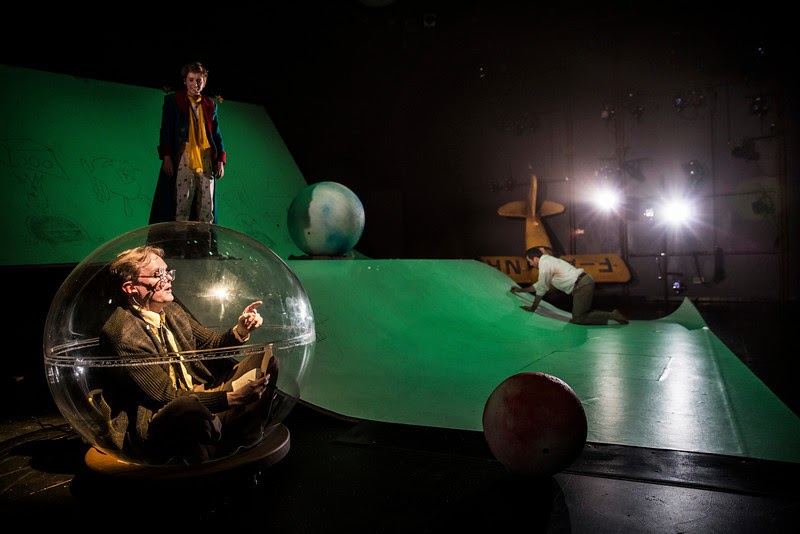 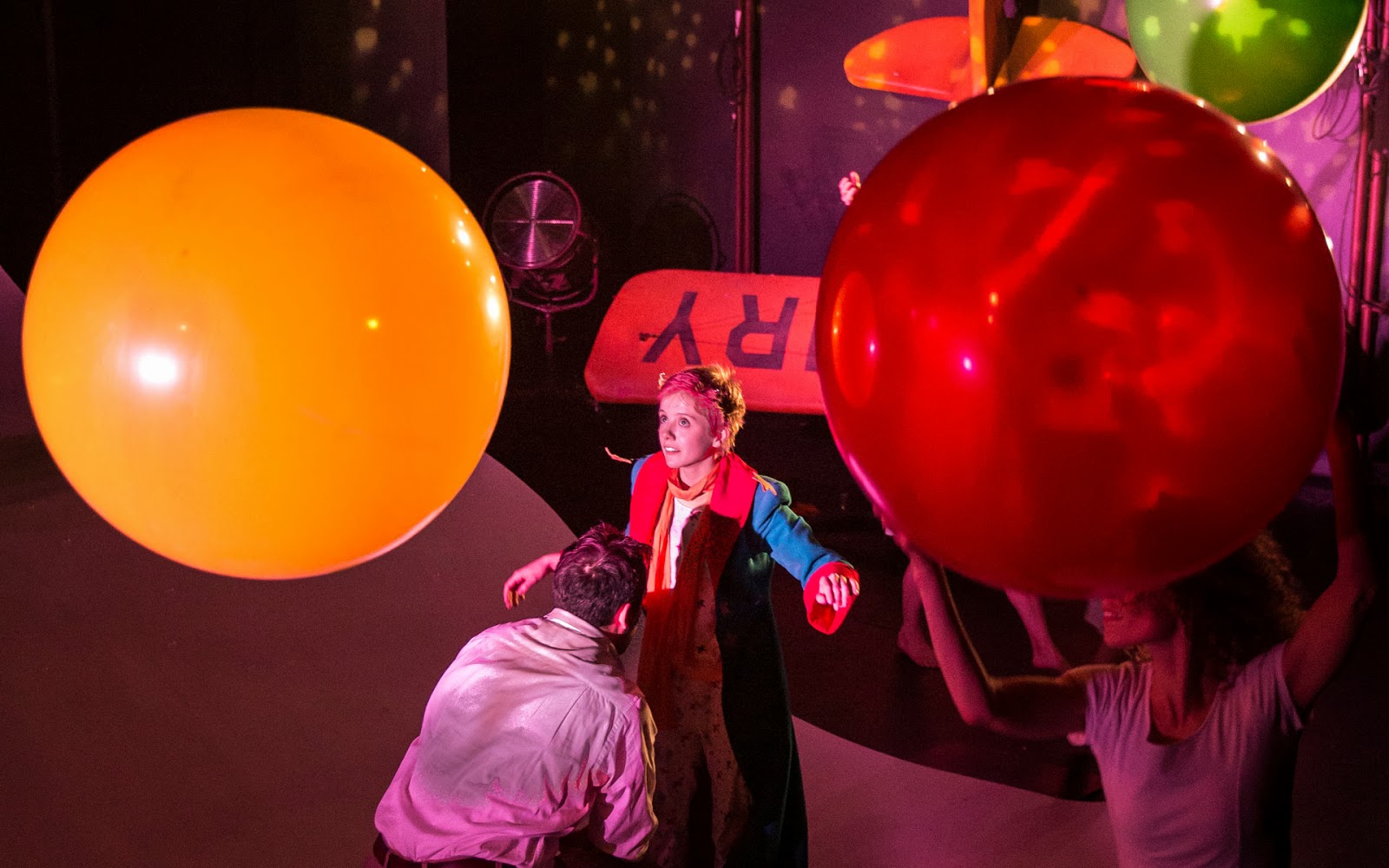