Here's our round up of Chi, IL Live Theatre Shows Opening, Closing, Postponed & Extended(also check out our highly recommended list): 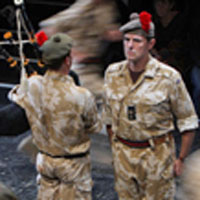 Black Watch by National Theatre of Scotland at Broadway Armory -ChiIL Live Shows caught opening night and we were shocked and awed.  This action packed war drama is raw, real and disturbing without glamorizing combat.  In a brilliant way, the seduction of honor, history, and the warrior way stand in stark contrast to the soul killing, psychologically damaging, desert warfare of today.  Black Watch is political without being heavy handed and loud, bright and intense enough to get the message heard.   Highly recommended!

Click here for our past coverage and show details here. 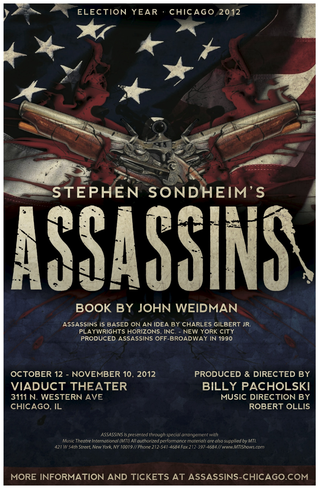 Stephen Sondheim's Assassins at Viaduct Theater-ChiIL Live Shows will be there for the opening tonight and we'll have a full review up shortly.  Click here for our past coverage and show details. 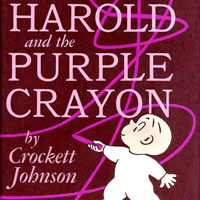 Harold and the Purple Crayon at Chicago Children's Theatre (family friendly-ages 3+)-Check out our photo filled feature on the early creative process behind the costumes and set design and show details here.

Here's more of our past Harold coverage including full show details. 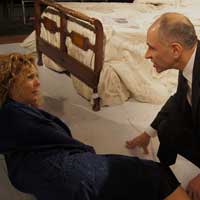 Broken Glass at Red Twist-
Red Twist is one of our favorite black box storefront theatres and they consistently impress with high quality, Jeff recommended offerings.  Click here for our past coverage and show details. 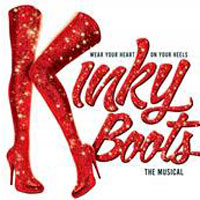 Kinky Boots at Bank of America Theatre with Broadway in Chicago-check out our original video footage with Cyndi Lauper and Harvey Fierstein and photos from the press conference here.   The show is currently in previews and we'll be there for opening night October 17th.   Can't wait!

Check back with ChiIL Live Shows/ChiIL Mama like we vote in Chi, IL...early and often.   We have loads more original video clips and photo filled features coming! 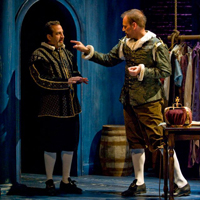 If you haven't seen this show yet, go already.  Equivocation unequivocally rocks!   Bard nerds will find this show a laugh riot with plenty of Shakespearian references and in jokes.   Yet Equivocation is something utterly unique and new, with biting political commentary, compelling characters, and multilayered meaning.   Highly recommended.  Click here for our past coverage and show details.

Due to major funding that did not come through, the production of “Unspeakable,” which was scheduled to start performances at the Royal George Theatre Oct. 16, has been postponed until the spring.  More details to come.  Refunds available at point of purchase. After at Profiles Theater (review)

There are plenty of prison dramas, but what happens after?  This slice of life exploration of the aftermath of wrongful conviction is a thought provoking social commentary.  What price can you put on a life unjustly snatched away in a miscarriage of justice.  How does jail time inextricably alter a man?   The characters go well beyond stereotypes and are a unique blend of traits and surprises.   Check it out.

When a wrongfully imprisoned man is exonerated by DNA evidence after seventeen years in prison, he is forced to re-assimilate into a cold, foreign world of toothbrush shopping, doggy day care, and a friendship with an anxious young woman with secrets of her own. After is a compassionate portrait of a man struggling with the challenges of socializing and the anger he still feels for having his youth unjustly destroyed.

After, written by Chad Beckim, received its World premiere production in September 2011 by Partial Comfort Productions in New York where he is co-Founder and co-Artistic Director. His playwriting credits include …a matter of choice, `nami and Lights Rise on Grace which won Outstanding Play at the 2007 New York International Fringe Festival and finalist for the 2007 Princess Grace Award. Chad holds an MFA in Playwriting from Mac Wellman’s Brooklyn Colleges Program and in July 2007, he was named one of 50 Playwrights to Watch by the Dramatists Guild.

After is the second production of Profiles Theatre’s 24th season. The 20th Anniversary production of Hellcab by Will Kern opens at Profiles’ The Main Stage on November 15, 2012.