ACT OUT KIDS: Duck for President Opening at Lifeline Theatre 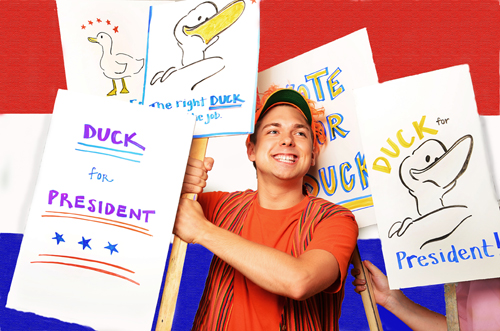 Are you looking for a way to help kids relate to the presidential election?   Check out Duck for President at Lifeline Theatre!   They're one of the best bets in Chi-town for high quality, professional productions, great literary adaptations, and creative original works that don't dumb it down.   Highly recommended!
We caught Duck for President the first time around and it was a laugh a minute antidote to somber debates and election year lies.   Sure, this is billed as a kids' show, but Lifeline's productions are so witty and wonderful, that even the adults will leave well entertained.
Lifeline Theatre’s KidSeries presents Duck for President, a family musical based on the book by Doreen Cronin and Betsy Lewin (Text ©2004 by Doreen Cronin. Illustrations ©2004 by Betsy Lewin. Originally published by Simon & Schuster. Used with permission of Pippin Properties, Inc.).

Life on the farm is hard: too much work, not enough sleep, and no time for swimming. And who put Farmer Brown in charge, anyway? When the chores get out of control, it’s time for a charismatic young Duck to run for office. And once he’s running the farm, it’s only a few more steps before he’s running the whole country. With Cow and Hen’s help — and with Pig as his campaign manager — nothing can stand in Duck’s way!

The smash hit musical about the pitfalls of politics returns, just in time for the election. This production is appropriate for children ages five and up, and runs approximately one hour with no intermission. The book will be on sale in the lobby.
Duck for President runs Saturday, October 20 – Sunday, November 25, 2012 at Lifeline Theatre,
6912 N. Glenwood Ave. Regular performance times are Saturdays and Sundays at 11 a.m. and 1 p.m.  (Previews are Saturday, October 20 at 11 a.m. and
1 p.m.; and Sunday, October 21 at 11 a.m.)  Ticket prices are $15 and may be purchased at the Lifeline Theatre Box Office, 773.761.4477, or by visiting www.lifelinetheatre.com.

PLUS: Join Lifeline Theatre every Saturday and Sunday at 12 p.m. during the run of Duck for President (following the 11 a.m. show, or before the 1 p.m. show) for our Stories Come Alive! Hour. Children of all ages will get up close and personal with the book that inspired the play in an interactive storytelling session, followed by theatre games exploring the characters, plot, and themes of the play. The cost is only $10 per child. Reservations are encouraged, though not required. Contact the Lifeline Theatre Box Office at 773-761-4477 for more information. 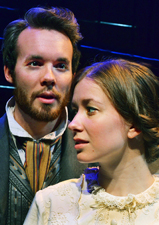 Now in its 30th season, Lifeline Theatre specializes in original literary adaptations. Its ensemble of artists uses imaginative, unconventional staging to portray sprawling stories in an intimate space. Lifeline is committed to promoting the arts in its Rogers Park neighborhood and is an anchor of the Glenwood Avenue Arts District.  We aspire to create art that is relevant to our culturally diverse, increasingly youthful neighborhood.  Lifeline Theatre – Big Stories, Up Close.
Founded in 1982, Lifeline is known for staging innovative adaptations of great works of fiction as well as commissioning original work. Over the course of thirty years and more than one hundred and fifty productions, Lifeline Theatre has made an indelible mark on the Chicago theatre scene and an invaluable contribution to the theatre world at large. Lifeline’s dedicated artistic ensemble has developed a total of one hundred world premiere literary adaptations and thirteen original plays, two dozen of which have had a life beyond their Lifeline premieres, with nearly one hundred and fifty subsequent productions spread across more than thirty U.S. states, four Canadian provinces, England, and Ireland. Additionally, two scripts developed at Lifeline Theatre have gone on to U.S. national tours, and nine have been published.
Lifeline Theatre has garnered a total of forty-eight Jeff Awards (Equity and Non-Equity), including fourteen for New Adaptation or New Work, and twenty-one After Dark Awards. The critics have said, “Few American theaters can do this kind of thing – with such imagination, dignity, humor and judicious restraint – quite like the master storytellers at Lifeline.” (Chicago Tribune, 5/12/10); and “Lifeline raises the bar on family theatre.” (Chicago Parent, 5/29/11).
Lifeline Theatre’s programs are partially supported by Alphawood Foundation;  Elizabeth F. Cheney Foundation; CityArts grant from the City of Chicago Department of Cultural Affairs and Special Events; The Common Cup; Gaylord and Dorothy Donnelley Foundation;  Lloyd A. Fry Foundation; The Grover Hermann Foundation; Illinois Arts Council, a state agency; MacArthur Fund for Arts and Culture at Prince; The Pauls Foundation; The Polk Bros. Foundation; The Rhoades Foundation; S&C Foundation; The Woman’s Club of Evanston; and the annual support of businesses and individuals.
Posted by Bonnie Kenaz-Mara at 12:58 PM