Jake and Elwood Blues are Back Starting TONIGHT! 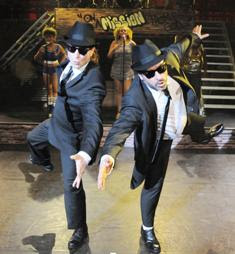 Du-Jay will be learning about an important part of Chicago culture tonight ,with his introduction to The Blues Brothers.   ChiIL Mama will have a full review up for you this week.
“The All New Original Tribute to the Blues Brothers,”  opens tonight at the Auditorium Theatre on a limited run,  July 6 through July 24.  It's a fun, family-friendly show, and a key piece of our pop-cultural heritage, every Chi-town child should know about.
The All New Original Tribute to the Blues Brothers™
Smash Hit
Dates: July 6-24, 2011
Times: Wednesday - Friday at 7:30 pm, Saturday at 2:00 and 7:30 pm, Sunday at 2:00 pm
Price: $55-$25
For three weeks only, your favorite Blues Brothers moments and songs come to life in the legendary Original Tribute to the Blues Brothers. Jake and Elwood Blues bring a humorous, swinging and lively show to Chicago, crooning your favorite songs with a few new twists, a few new moves and a clean, freshly laundered suit.
The boys are joined by the sassy Bluettes, three amazing ladies with voices that’ll knock your socks off. So don the sunglasses, dig out your best pork pie hat and buff up those dancing shoes because the Blues Brothers cordially request your presence for a night of the best music, the best moves and the best comedy.
LONDON’S SMASH HIT SHOW “THE ALL NEW ORIGINAL TRIBUTE TO THE BLUES BROTHERS™” COMES TO THE AUDITORIUM THEATRE OF ROOSEVELT UNIVERSITY
JULY 6 – 24
Critically Acclaimed 2011 Production Features Entire Original London Cast Making North American Debut
“The All New Original Tribute to the Blues Brothers,” the smash hit featuring cast members from the original London run, will make its U.S. debut at the Auditorium Theatre of Roosevelt University for three weeks, July 6 – July 24, 2011.  Tickets range from $25-$55 and are on sale now, available at www.ticketmaster.com/auditorium or by calling (800) 982-2787.
Presented by the Auditorium Theatre, the show is a joint production by Charles Aerts Theatre Productions and EJB Entertainment. Jake and Elwood Blues will once again be donning their iconic hats, sunglasses and suits to bring to life a host of the duo’s most memorable hits, including “Shake A Tail Feather,” “Think,” “Respect,” “Gimme Some Loving” and the toe-tapping classic “Everybody Needs Somebody To Love!” This brand new reworking of the celebrated show is directed by Brad Henshaw; an established name on the international music stage who will also star in the show as Jake. The hit West End show is being upgraded for Jake and Elwood’s return to Chicago with a brand new set, updated choreography and new songs.
Following its modest premiere in a small seaside pub in Brighton in 1991, “The All New Original Tribute to the Blues Brothers” quickly became a runaway success. It was picked up by theater producer David Pugh and film director David Leyland, who opened the show in the West End just six months later. The run was extended from six to an unprecedented 46 weeks, playing to more than 150,000 people.
“The Blues Brothers” was a blues and soul revivalist band founded in 1978 as part of a musical sketch on “Saturday Night Live.”  Lead vocalist "Joliet" Jake Blues and harmonica player/vocalist Elwood Blues fronted the band, composed of well-known and respected musicians. The band began to take on a life beyond the confines of the television screen, releasing an album, “Briefcase Full of Blues” and two films, “The Blues Brothers” (1980) and “Blues Brothers 2000” (1998).
The memorable songs and characters live on in “The All New Original Tribute to the Blues Brothers.”  “Jake and Elwood” continue to entertain audiences throughout the world.  Brad Henshaw plays “Jake,” Daniel Fletcher stars as “Elwood” and the duo is backed by one of Europe’s finest seven piece bands, along with three soulful and sassy singers, Jocasta Almgill, Victoria Goddard and Alexus Ruth, aptly named “The Bluettes.”
Ticket Information
Tickets to the July 6 – July 24 performances are $25-$55 and are available online at ticketmaster.com, by calling
(800) 982-2787 or in-person at ATRU’s Box Office (50 E. Congress Parkway).  Groups can purchase tickets at
(312) 431-2357.
Performance Schedule
The July 6 – July 24 performances of “The All New Original Tribute to The Blues Brothers” play:
Wednesdays - Fridays at 7:30 p.m.
Saturdays at 2 and 7:30 p.m.
Sundays at 2 p.m.
About Charles Aerts Theatre Productions and EJB Entertainment
EJB Entertainment and Charles Aerts Theatre are responsible for bringing the biggest international theatre successes to the Dutch and  international stage. You can find more information about the current and upcoming productions on www.ejbentertainment.com and www.charlesaerts.com.
About the Auditorium Theatre of Roosevelt University
The Auditorium Theatre of Roosevelt University, located at 50 E. Congress Parkway, is an independent, not-for-profit organization committed to presenting the finest in international, cultural and community programming to Chicago, and to the continued restoration and preservation of the National Historic Landmark Auditorium Theatre. The Auditorium Theatre is generously supported by the Illinois Arts Council, CityArts, American Airlines and the Palmer House Hilton.  For more information about programming, volunteer and donor opportunities or theater tours, call (312) 922-2110 or visit auditoriumtheatre.org.
The Blues Brothers trademark is owned by Daniel Aykroyd and Judith Belushi Pisano.
Posted by Bonnie Kenaz-Mara at 11:25 AM

Email ThisBlogThis!Share to TwitterShare to FacebookShare to Pinterest
Labels: Auditorium Theatre, Broadway in Chicago, The All New Original Tribute to the Blues Brothers