We had the great pleasure of checkin' out Cirque Du Soleil's Ovo not once, but twice, last week and we are completely enamored.   We've been fans of Cirque's  visually stunning shows, that push the boundaries of circus arts, for years.   We were particularly jazzed to see Ovo, as Deborah Colker is Cirque du Soleil's first female writer/director.    We also think bugs are pretty cool, too.


Du-Jay and I first saw the show on Tuesday and were captivated by Ovo's magical microcosm of the insect world.   Although the weather was more Cirque Du Pleuvoir (or rain) than sun, we stayed dry under the Seussian blue and yellow striped big top, and had a great evening despite the drizzle.    Thursday we got to go back again with CircEsteem and take Sagezilla, who was more than ready to grab on to the silks and join up.  The talented, local CircEsteem kids will be providing the VIP tent entertainment for this Thursday night's performance of Ovo!


Tomorrow we're very excited to be interviewing Ovo's Artistic Director, Marjon van Grunsven and Sébastien Savard, Ovo's violinist, who is on tour with his family.   We've been shooting a whole series of video interviews on how creatives parent and how parents create.   It's a challenge to find a balance, but we believe that parenting and doing creative work simultaneously, infuses each aspect with the best qualities of the other, and enhances both.

Humans share our actual world with over 900 thousand different types of insects, according to Encyclopedia Smithsonian.    And people, particularly circus artists, have borrowed moves, costume designs and materials from the insect world for centuries.   It's about time we made a celebration of the similarities.


In circus arts and the insect world, there's a common vocabulary, with Spanish  WEB and SILKS.   We thought the pairing of a silk worm carrying the silks to the ceiling, culminating in a beautiful act where the moth hatches from her silken cocoon and stretches her new wings, were genius.    We also adored the arachnids.   Act 2 begins with an impressive giant spider web, just begging to showcase circus web skills.


The human/insect parallels don't end there.    Ovo's bug world is full of fight, flight, fun, love, work, play, and basic need fulfillment.    Over all there is Ovo-the egg-symbol of life.   Eggs in this show are coveted as food, and protected as progeny.   Glowing eggs are cradled and cherished as future generations.    And the very word, ovo, pops out frequently from among the bugs' gibberish. 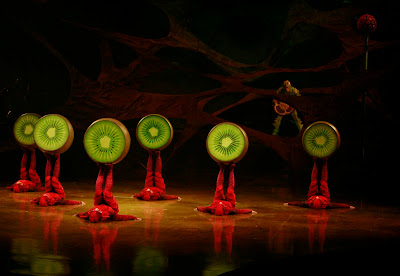 The little red ants with their feet feats, were big fun.   They not only juggled giant kiwi slices, but also baby corn and each other!   Ovo also manages to make people laugh, and we really dug that the geeky, spiky underdog gets the girl.   We were also thrilled that the show's love interest isn't some dainty princess, waiting to be rescued, but a sizable power house of a bug who rescues her man and is all about being mighty.


Our favorite acts for technical skill were the slack wire and the grand finale wall.   I have never seen anyone attempt the slack wire feats we witnessed, and they still don't seem like they should be humanly possible!   We had the great pleasure of checking out the urban tramp wall at Cirque Eloize-ID, in late April, and were blown away.   Yet Ovo brings something new to the table with a hybrid tramp wall/climbing wall!   Check out some of Ovo's stunning performance videos here.   Cirque du Soleil remains state of the art, with the budget to keep top performers, live musicians, and numerous unique, world class productions on tour.


We're always impressed that the musicians are such an integral part of the show, with a place of honor on the stage, not hidden away in the depths of an orchestra pit.    Cirque shows original sound tracks are so good, they're released as freestanding CDs.    When the energy of the musicians and actors and audience mix, it's pure, volatile magic.


Ovo has been criticized for playing more to the front section than to the sides and that is a valid complaint, as the tent space more resembles theatre in the round, or at least in a deep U.   Past Cirque shows we've seen did more of a well rounded job of aiming acts to the sides.


That said, we saw the show from the 5th row center, which was breathtaking, and from the very back center row, and that was extremely cool, too.    The sight lines are clear, even from the back of the tent, and the higher seats provide a great view of the light show, images projected on the tent roof and the group choreography.   Up close, the make up and costumes on the insects were amazing.   With a small, intimate space, there are no far balcony seats or obstructed views, and everyone is drawn into the action.


If you're balking at the ticket prices, there are discount options available, and Ovo is a spectacle well worth the money.   Check into family 4 packs for as little as $150 for select shows or join The Cirque Club for free and get 30% off on select seating for all remaining performances.    Ovo runs through August 23rd in Chicago. 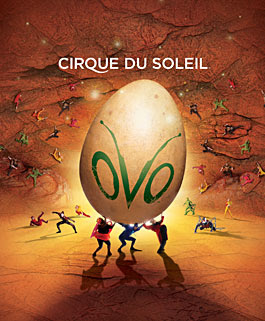 OVO is a headlong rush into a colourful ecosystem teeming with life, where insects work, eat, crawl, flutter, play, fight and look for love in a non-stop riot of energy and movement. The insects' home is a world of biodiversity and beauty filled with noisy action and moments of quiet emotion.
When a mysterious egg appears in their midst, the insects are awestruck and intensely curious about this iconic object that represents the enigma and cycles of their lives.
It’s love at first sight when a gawky, quirky insect arrives in this bustling community and a fabulous ladybug catches his eye – and the feeling is mutual.
OVO is overflowing with contrasts. The hidden, secret world at our feet is revealed as tender and torrid, noisy and quiet, peaceful and chaotic. And as the sun rises on a bright new day the vibrant cycle of insect life begins anew.
"Cirque du Soleil turns bug’s world upside-down in spectacular OVO.”
Chicago Sun-Times
"Cirque du Soleil OVO: Bugging out extravagantly under the big top.” "OVO is the latest in a long and very distinguished line that have been coming to Chicago for two decades.”
Chicago Tribune
"An exotic insect world aims to delight imaginations  "
"Cirque achieves a fanciful illusion "
Metromix
"Cirque du Soleil ‘OVO’ delivers the unbelievable "
" For two hours, the audience member slowly becomes part of Cirque’s world and will start to think that those are real giant ants spinning real giantsfruits in the air "
Cincinnati Enquirer
“OVO Presents lavish look at world of insects”
“Cirque hatches visual stunner”
Houston Chronicle
“OVO is an astonishing showcase of superhuman feats of strength, balance and contortion”
Houston Press
“Cirque du Soleil OVO: an experience like no other”
Houston Style Magazine