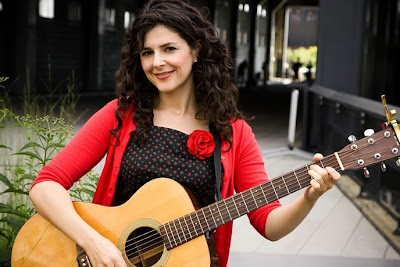 The monkey business continues here at ChiIL Mama's Win-
A-Disc-Wednesdays.   This week, one lucky winner will take home Meredith LeVande's latest CD, What Are The Odds, just released August 31st.   Check out her web site at Monkey Monkey Music to hear some of the new tracks, order your own CD or watch her videos.   There's even a Monkey Monkey Music  game room, where your preschooler can play fun, simple games.


Enter at the bottom of this post to win your own copy. 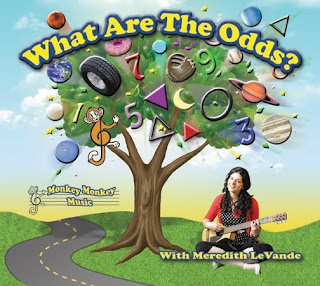 This CD does aim for the younger listener (listed as recommended for 2-7 year olds), and Du-Jay and Sagezilla both agreed five year olds and under would enjoy it the most.   If you have a preschooler at home who is feeling a little left out as the big sibs head back to school, this 16 track disc might be a timely surprise.


What's more, this new release isn't purely entertaining, it's brainy and brilliant.   With Meredith's monkey magic, your littles can learn right along with their older sibs, and have so much fun, they won't even realize how much they're innately absorbing.


The title track, What Are the Odds, not only teaches counting by odd numbers, but also follows the scale degrees of the "Mixolydian" mode when counting odd numbers.


There is a depth, history and mathematics to Meredith's musical compositions.   9 Planets recalls Kepler's "harmony of the spheres" which posits that the distance between the planets share the same intervallic relationships as the harmonic series, the physics of all music.


Turn Your Body Around introduces kids to the 12 bar blues structure, the foundation of much popular American music.


In Circle, Meredith embodies the interconnectedness of people and encourages
families to dance together in unity.   Since ancient times, cultures around the world have created melodies for their children featuring the distinctive sound of the musical interval known as the descending minor third.   Circle is a modern festival of these sounds, symbolically joining listeners today with one another and with the past. 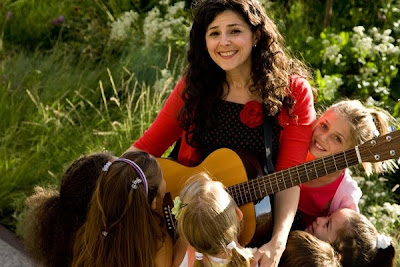 NYC-based singer/songwriter Meredith LeVande could truly be termed a “Renaissance woman of children’s music.”  Meredith not only holds undergraduate degrees in Women’s Studies and English, she also has a master’s degree in music and a law degree!  Drawing from all these disciplines for her multi-faceted work with children, Meredith heads up a project with the marvelously mischievous moniker Monkey Monkey Music, with a focus on “putting the child back into children’s music.”

Five years ago Meredith’s debut album, Monkey Monkey Music with Meredith LeVande, became an instant hit with families nationwide, was a Parenting magazine “Pick,” and was in rotation on Sirius Satellite Radio, earning a grassroots reputation as a classic children's recording. Meredith LeVande has, since 2005, devoted herself to performing for children in intimate settings, becoming a favorite among NYC area families and creating a repertoire that has grown organically due to her one-on-one interactions with children of virtually every culture imaginable.

With the new Monkey Monkey Music CD, What Are the Odds?, Meredith has created something remarkable, finding the middle road between baby songs and pop band songs where kids’ lyrics are simply added to music that would otherwise be played for adults.  Meredith’s music is not only child-friendly, it’s truly child appropriate, developed with the healthy growth of the young child in mind.


Enter here to win your own copy of

Posted by Bonnie Kenaz-Mara at 7:03 PM