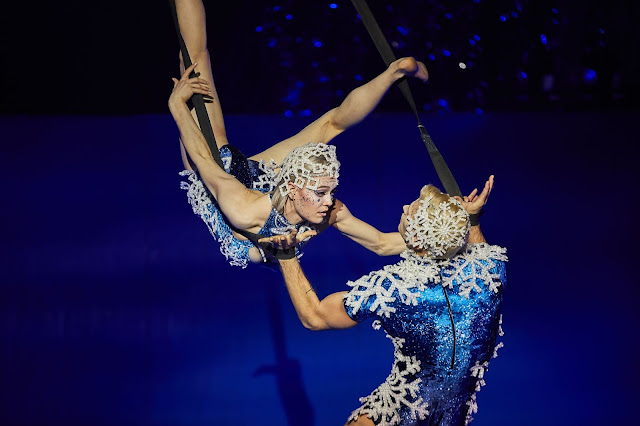 Photo Credit for all: Errison Lawrence

I loved Cirque Du Soleil’s “‘Twas the Night Before”. As a whole, it was a huge spectacle and incorporated many interesting acts, each with their own unique sensory experience. Some of the acts were truly unique in their execution, such as the Hotel Cart and Aerial Lamp acts, where performers used unusual objects as aerial apparatuses. These acts brought me joy as a performer to see how the concept of what can be used to make a performance can really extend as far as the performer’s imagination allows. 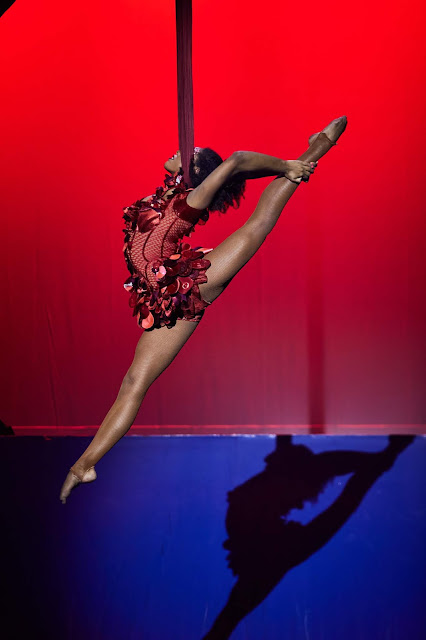 Some of the acts brought new life to acts usually overdone in the circus: for example, in the Diabolo act, “‘Twas the Night Before” had performers use long ropes fit for 10 person jump-roping to pass diabolos around audience participants. This is something I have never seen before and it brought a new light to what could be done to add new light to a typically overdone skill in the circus. 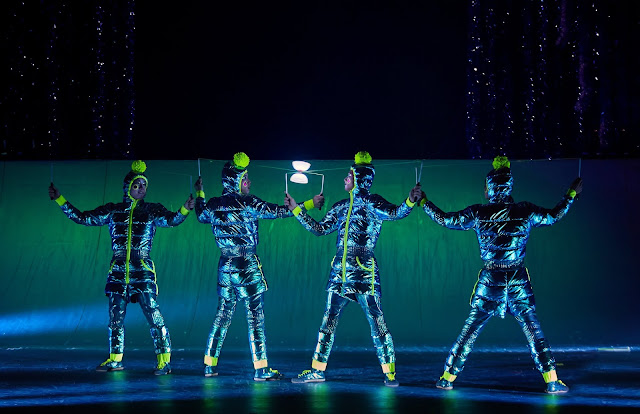 Speaking of lights, the lighting in this show was one of the main focuses and is extremely well done. The performance includes everything from handheld lights ‘passed’ between performers to chaser lights in the Hoola hoops to using a light for an aerial act. And to compliment all of that further the stage lights bring out the true colors of each act, especially when they shimmer off of the enormous strands of tinsel used as the set. 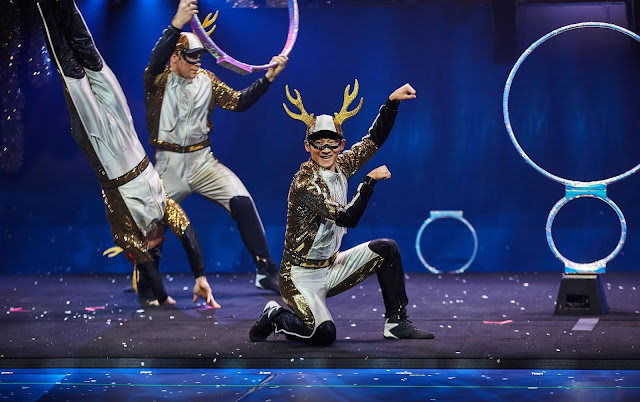 The costumes were also spectacular, as is usual in Cirque du Soleil shows. All of the costumes were really expressive of the characters, some even bringing a new idea to how a character is presented, for example, the character Jolly being portrayed in most of the show as having a ragged soot-stained cloak, rather than the ‘typical’ Santa outfit of a red suit and white beard. Overall, it tells a really nice story about family and passion, and how stories can connect us all in a time of digitization where we are less likely to spend quality time together by letting us find our passion or ‘spark’ and share it with the world.

Dugan Kenaz-Mara is studying theatre (performance) at Northwestern University. He was born and raised on Chicago theatre productions since early childhood. He has also studied circus arts/performance at Actors Gymnasium in Evanston and CircEsteem in Chicago. The past two seasons, he spent summers on cast at Bristol Renaissance Faire. 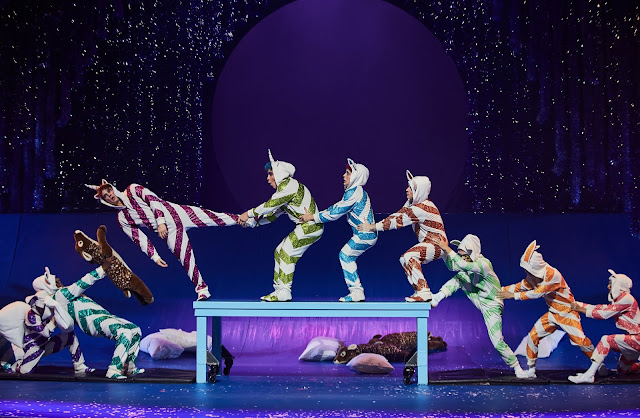 Cirque du Soleil and The Madison Square Garden Company (NYSE: MSG) have partnered up on the all-new family production, ‘Twas the Night Before…, which makes its debut at The Chicago Theatre this holiday season. 'Twas the Night Before... is an exhilarating spin on the beloved Christmas classic as only Cirque du Soleil could imagine. This festive show about the wonders of sharing and friendship promises to spark lasting memories in the hearts of families this holiday season. The production is now playing at The Chicago Theatre, 175 N. State Street, through December 8, 2019 for 17 performances. Tickets are on sale now. 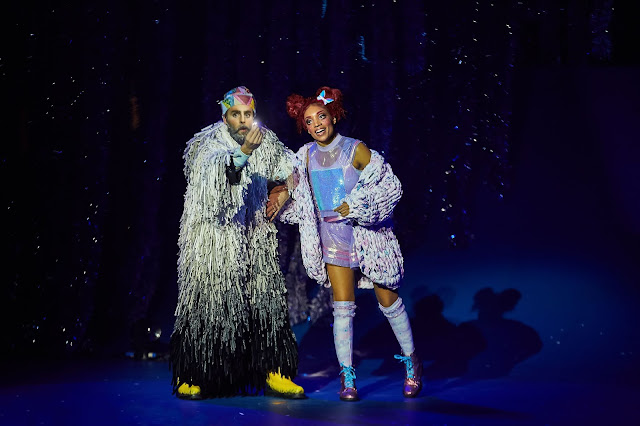 Cirque du Soleil’s first-ever Christmas show, ‘Twas the Night Before... is a flurry of love, Christmas cheer, rip-roaring fun and hugely lovable characters that will become a new tradition for families to cherish. Join Isabella, a curious girl who’s become jaded by the hoopla surrounding Christmas, as she is whisked away to an upside-down, inside-out world where she meets characters inspired by the original timeless poem. Discover what happened before Santa dropped in! 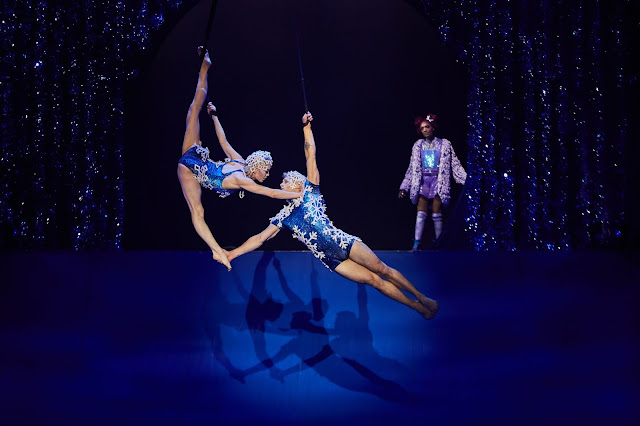 “We are so excited to announce our cast and creative team for ‘Twas the Night Before…, and can’t wait to showcase their talents upon the stage in Chicago this holiday season,” said Khalil. “Featuring original acrobatics, spectacular choreography, dazzling costumes, and familiar music sure to strike an emotional chord,  ‘Twas is a completely new experience that brings families together to celebrate the holiday spirit.” 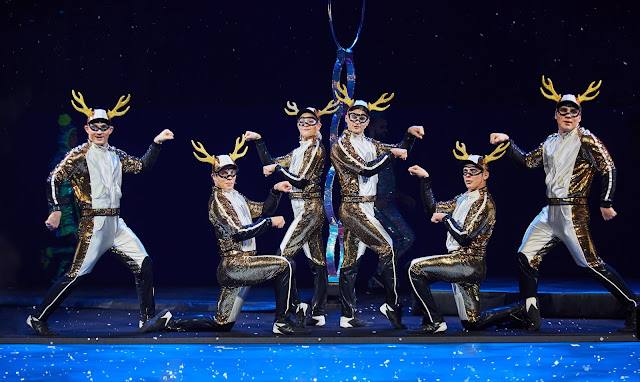 “We are thrilled to share with audiences the premiere of ‘Twas the Night Before…, an all-new family production, as this classic Christmas story is brought to life onstage through the creative lens of Cirque du Soleil,” said Darren Pfeffer, executive vice president, MSG Live, The Madison Square Garden Company.  “Through the visionaries behind the creative team coupled with the incredible artistry of the performers, we look forward to delivering an unforgettable production for families this holiday season that can only be seen at our venues: The Chicago Theatre and Hulu Theater at Madison Square Garden.”

For more information and tickets to ‘Twas the Night Before… at The Chicago Theatre, visit chicagotheatre.com/cirque or call Ticketmaster at 1-800-745-3000 or the Ticketmaster Box Office at The Chicago Theatre. Box Office hours are Monday-Friday, 10:00 a.m. to 6:00 p.m. Tickets starting at $30. Groups of ten or more please call 773-327-3778; discounts available for groups of 20 or more. Service charges apply to telephone, internet and box office pick-up orders. Accessible and companion seats are available via the Disabled Services Department at 888-609-7599. 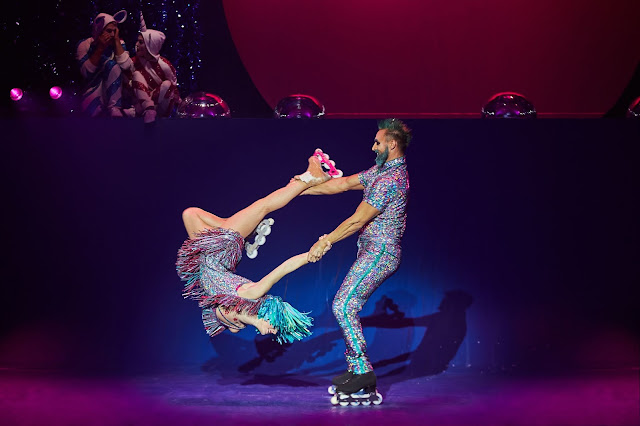 Posted by Bonnie Kenaz-Mara at 3:21 PM