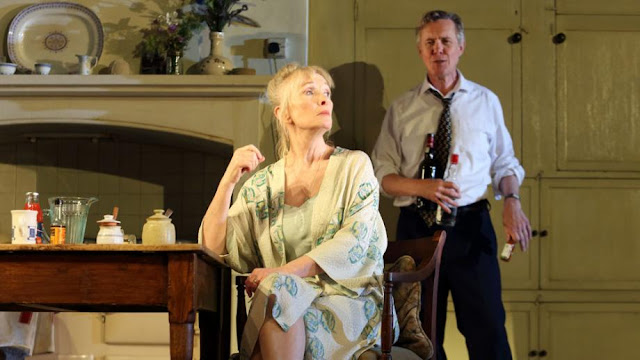 Three-time Olivier Award winner Alex Jennings (Netflix’s The Crown), in Chicago rehearsing for his upcoming role in the Tony Award-winning musical, The Light in the Piazza, at the Lyric Opera House Dec. 14-29, will make a special appearance at the Gene Siskel Film Center of the School of the Art Institute of Chicago (164 N. State Street) following the National Theatre Live screening of the engrossing new work, Hansard, in which he co-stars with Olivier and Tony Award-winning actress Lindsay Duncan (Private Lives), Friday evening, December 6, at 7:45pm.  Jennings will be on hand afterwards to answer questions about his acclaimed Broadway, West End, and TV career.

Hansard, a witty and devastating portrait of the ruling class by Simon Woods, portrays a summer’s morning in 1988, as Tory politician Robin Hesketh (Jennings) has returned home to the idyllic Cotswold house he shares with Diana (Duncan), his wife of 30 years.  But all is not as blissful as it seems.  Diana has a stinking hangover, a fox is destroying the garden, and secrets are being dug up all over the place.  As the day draws on, what starts as a gentle ribbing and the familiar rhythms of marital scrapping quickly turns to blood-sport. Directed by Simon Godwin as part of National Theatre Live, this brand new play is part of an initiative operated by the Royal Theatre in London which broadcasts performances of their productiions live via satellite to cinemas and arts venues around the world.

Tickets for Hansard at the Gene Siskel Film Center will be on sale Friday, November 22 and priced at $14 (general) and $8 (members/students). Hansard will be screened Friday, Dec. 6, at 7:45pm, and Sunday, Dec. 8 at 2:30pm; Jennings will appear following the Dec. 6 screening only.  For more information, please visit http://www.siskelfilmcenter.org/nt-live-hansard.

Alex Jennings reprises his role as Signor Naccarelli in The Light in the Piazza after appearing in the production at London’s Royal Festival Hall. Alex is a three-time Olivier Award winning TV, film and theatre actor who has worked extensively with the Royal Shakespeare Company, the National Theatre and throughout the West End. His three Olivier Awards include Best Comedy Performance for Too Clever by Half (Old Vic), Best Actor for Peer Gynt (Royal Shakespeare Company) and Best Actor in a Musical for My Fair Lady (Theatre Royal, Drury Lane). His screen appearances include playing Edward VIII in the critically acclaimed Netflix series The Crown, Alan Bennett in The Lady in the Van and Prince Charles in The Queen, alongside his many television roles which most recently include Unforgotten (ITV), A Very English Scandal (BBC), The Halcyon (Left Bank) and Victoria (Mammoth Screen).

Jennings is in Chicago rehearsing for his role as Signor Naccarelli opposite four-time Grammy Award winner and Tony Award nominee Renée Fleming as Margaret Johnson in the limited holiday engagement of the beloved Tony Award-winning musical The Light in the Piazza, December 14-29, 2019, at Lyric Opera House (20 N. Wacker Drive).  Fresh from critically acclaimed runs in LA and London, The Light in the Piazza is produced by John Berry CBE and Anthony Lilley OBE for Scenario Two and Karl Sydow. The production is directed by multiple Olivier Award-winning director Daniel Evans and features the Lyric Opera Orchestra under the baton of Kimberly Grigsby, conductor of the original Broadway production.

The perfect feel-good alternative to traditional holiday fare, The Light in the Piazza’s rich, emotional score is unique amongst 21st-century Broadway musicals. Unapologetically lyrical, it was described upon its Broadway debut as having “the most intensely romantic score of any musical since West Side Story” (New York Times).

Based on the novel by Elizabeth Spencer, The Light in the Piazza book is by Craig Lucas, with music and lyrics by Adam Guettel. Scenario Two’s production of The Light in the Piazza is directed by Olivier Award winner and critically acclaimed musicals expert Daniel Evans and designed by Robert Jones, with costumes by Brigitte Reiffenstuel, movement by Lucy Hind, lighting by Mark Henderson and sound by Kai Harada.

Tickets for the limited holiday engagement of The Light in the Piazza at Chicago’s Lyric Opera House (20 N. Wacker Drive), December 14-29, 2019, start at $49 and are on sale now. The Chicago engagement follows the production’s acclaimed runs at the LA Opera and London’s Royal Festival Hall. For more information or to purchase tickets, visit www.lightinthepiazzathemusical.com.

Since 1972, the Gene Siskel Film Center of the School of the Art Institute of Chicago has presented cutting edge cinema to an annual audience that has grown to over 120,000. The Film Center’s programming includes annual film festivals that celebrate diverse voices and international cultures, premieres of trailblazing work by today’s independent filmmakers, restorations and revivals of essential films from cinema history, and insightful provocative discussions with filmmakers and media artists. Altogether, the Film Center hosts over 1,700 screenings and 200 filmmaker appearances every year. The Film Center was renamed the Gene Siskel Film Center in 2000 after the late, nationally celebrated film critic, Gene Siskel. Visit www.siskelfilmcenter.org to learn more and find out what’s playing today.
Posted by Bonnie Kenaz-Mara at 3:56 PM