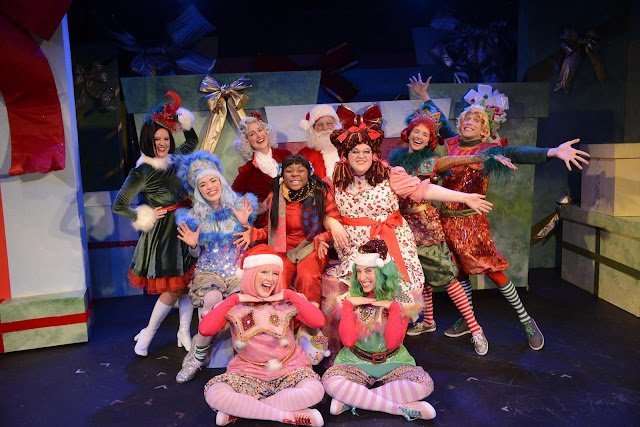 Eleanor's Very Merry Christmas Wish is a delightful Christmas cookie of a show, one that kids of all ages can enjoy. Parents of wee ones will be especially happy to have a Christmas play that engages and accommodates young children so well—from pre-show elvish entertainment to a post-show chance to meet Santa. After all, as Santa says in this play by Denise McGowan Tracy and based on her book of the same name, “All children are good at heart.” 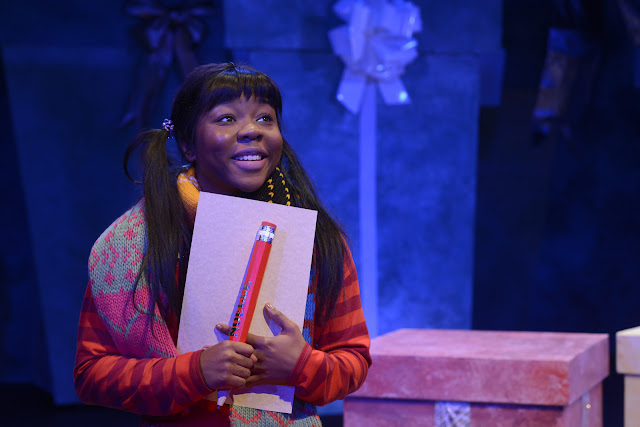 Eleanor, played with depth and sweetness by Samantha Bonzi, is a ragdoll who’s been at the North Pole for years—apparently the only toy in permanent residence with Santa, Mrs. “Cookie” Claus, and the elves, all of whom are like family to doll. But Eleanor has a couple of problems. She doesn’t know where she came from, and she longs for a best friend. 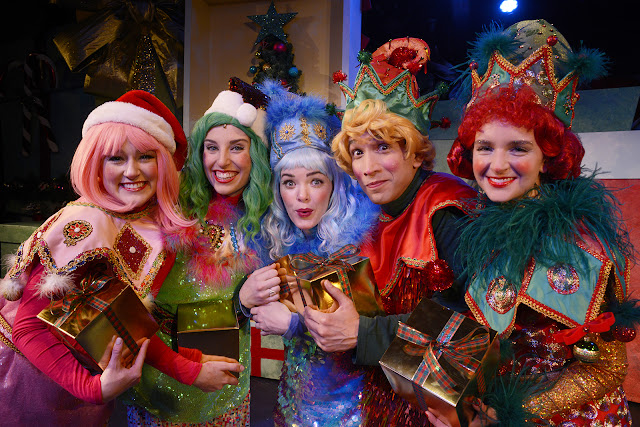 The North Pole is full of sequins, ribbon, presents, and that naughty and nice list maintained by Santa’s cousin Clara—played by Emily Rohm who brings some spice to all the sweetness flying around. 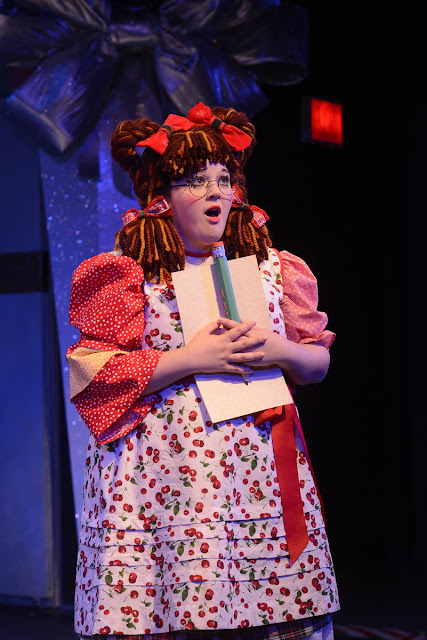 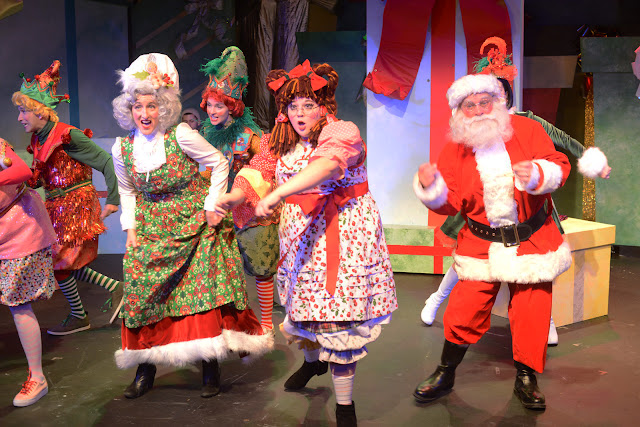 Musical performances stand out from Bonzi, Rohm, and Sydney Swanson—who plays the lonely young Noelle, a girl in Chicago who also longs for a best friend—align with catchy lyrics and music to make the small staging feel like a much bigger production.

Best of all, Eleanor’s Very Merry Christmas Wish does not condescend to children, but helps them address the very real thoughts about origin, family, and friendship that children of all ages must grapple with.

Eleanor's Very Merry Christmas Wish - The Musical tells the story of a rag doll named Eleanor who lives in the magical world of The North Pole. Despite her love for her family there, including Santa, Mrs. “Cookie” Claus, Clara Claus, and the elves - Twinkle, Sprinkle, and Sparkle, Eleanor's very merry Christmas wish is for a best friend and home of her own. Realizing that wishing is not enough, she writes a letter to Santa expressing her dream. The letter opens the door to answering many questions and to the journey which leads to her wish (and others) coming true.

Eleanor’s Very Merry Christmas Wish – The Musical is based on the heartfelt book of the same name published by Chicago powerhouse Denise McGowan Tracy in 2012. 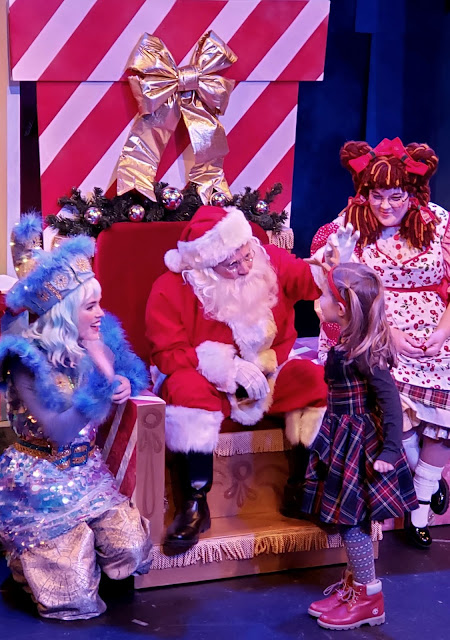 Single tickets are priced at $29.50 and “family packs” of four tickets are available for $100. Each ticket includes the opportunity for every girl and boy to take a photo with Santa immediately following the performance. Grown-ups are encouraged to have their cell phones ready to capture the moment. All tickets may be purchased by visiting https://www.eleanorswish.com or calling 773-40-GREEN. 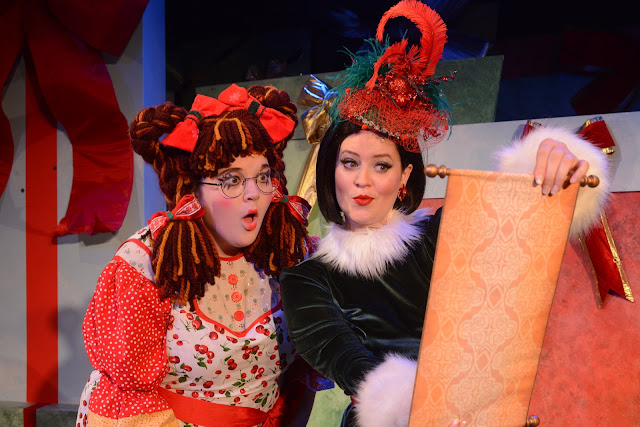 Denise McGowan Tracy (Creator/Playwright) A native Chicagoan, Denise McGowan Tracy has been a recognized face and force in Chicago’s entertainment community – both on-stage and behind the scenes – for 35+ years. She began her career managing and booking the talent for the storied Byfield’s nightclub, and is currently the creator and co-host, with Beckie Menzie, of the long-running impromptu musical showcase Monday Night Live at Petterino’s, which recently celebrated its 500th show.  McGowan Tracy served as Director of Entertainment for Navy Pier for a decade producing all public programming for millions of visitors and, as current founder of DMT Entertainment, her full-service entertainment production and event management company, she has produced events for clients including Landmarks Illinois, Lettuce Entertain You, The Sarah Siddons Society, and The ABA. With this production, she begins a new chapter in theater as creator, playwright, and producer.

Kathleen Gibson (Composer/Lyricist) Kathleen Gibson works as a music director at the Second City Training Center in addition to working as an AEA actor and freelance musician in Chicago. As an actor, her favorite theaters include: Theatre at The Center, Peninsula Players, Rocky Mountain Repertory Theatre, and the Royal George. She also plays guitar for toddlers with Stomp and Shout Chicago. She holds a B.M. from DePaul University and is a graduate of the Second City Conservatory. 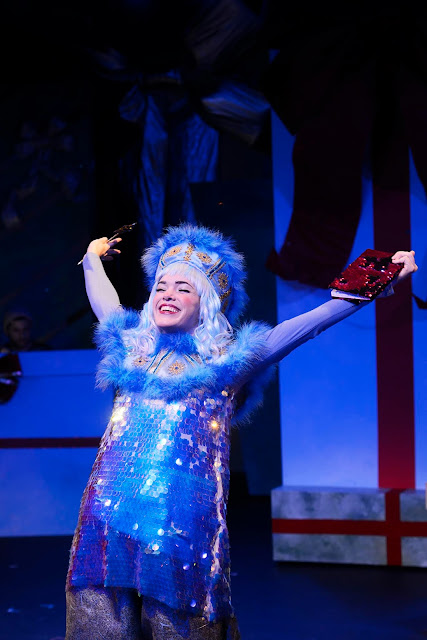 David Fiorello (Music Director) David Fiorello is a director, music director, performer, orchestrator, and playwright who’s had his work performed across the globe. Recently, he served as Music Director for Gypsy at Porchlight Music Theatre, starring seven-time Jeff Award Winner E. Faye Butler. He's currently Music Directing A Man of No Importance at Columbia College Chicago, where he is also on faculty. He's toured internationally with John Doyle's re-imagined Sweeney Todd and served as Music Director for the Off-Broadway hit Danny & Sylvia: The Danny Kaye Story. His musical The Language or The Kiss, which he conceived, arranged and starred in, featuring the music of The Indigo Girls, received several Off-Broadway industry readings. An in-demand vocal coach, he currently serves as Founder and CEO of Fiorello Studios and Fiorello Worldwide. 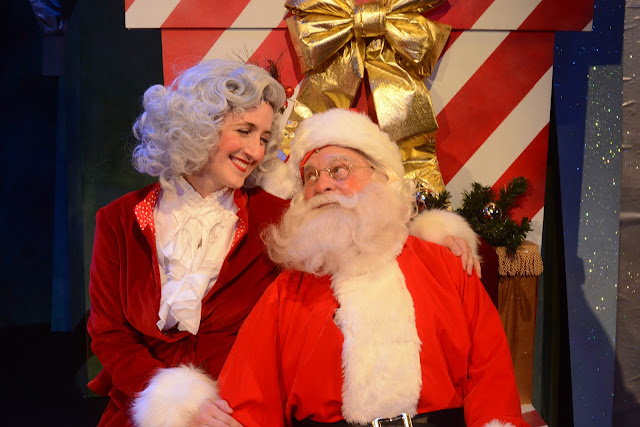 Aaron Shapiro (General Manager) Aaron Shapiro is the owner of Shapiro Production Mgmt, and currently works as the Production Manager for Emerald City Theatre. He recently served as lead General Manager for Miracle the Musical at the Royal George Theatre and as Production Manager at Victory Gardens for two seasons (Hand to God, Fun Home, Native Gardens). Other credits include Disenchanted and Unspeakable at the Broadway Playhouse, commercial productions of Splintered Soul and Twisted Knots with the Chicago Commercial Collective, Jeff-nominated productions of Heathers and Tomorrow Morning with Kokandy Productions, Jeff-nominated productions of The Rainmaker and the award winning Buddy - The Buddy Holly Musical with American Blues Theatre, Stupid F***ing Bird and Caught with Sideshow Theatre, Memphis, In The Heights, Far From Heaven, Sweeney Todd, Funny Thing Happened, Side Show, and Jeff Awards-winning productions of Dreamgirls, Ain’t MisBehavin’ and Sondheim on Sondheim with Porchlight Music Theatre where he is an Artistic Associate.

DMT Entertainment, founded by Denise McGowan Tracy, is a full-service event and entertainment production and management firm that produces a variety of high-profile, often private, events. More information at www.dmtentertainment.com. 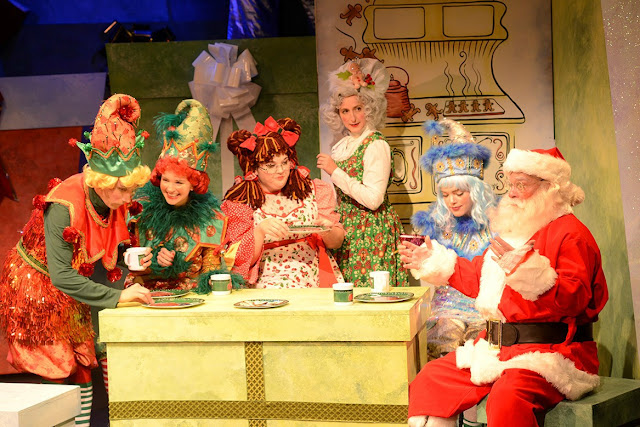