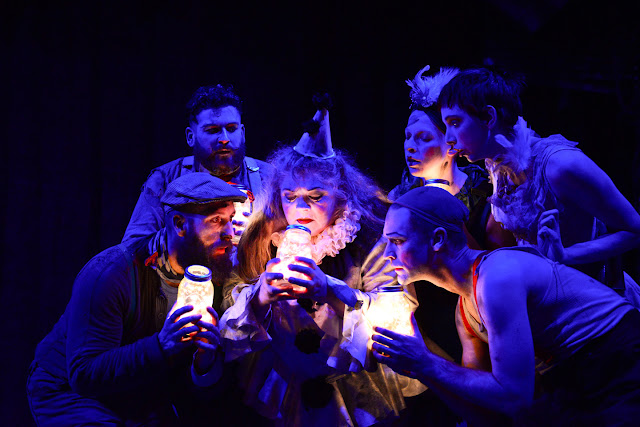 (pictured) The cast of The Ruffians’ 2014-15 production of BURNING BLUEBEARD.
All photos by Evan Hanover


Here at ChiIL Mama, we've caught The Ruffians’ Burning Bluebeard many times, since their inaugural show 8 years ago at the Neofuturarium. They're top favorites of ours, and this holiday season they're moving to the Ruth Page Center for the Arts. We'll be out for the press opening, Dec. 15, so check back soon for my full review. We're eager to catch long time friends, Pamela Chermansky (Fancy Clown) and Anthony Courser (Henry Gilfoil), who taught my teens circus arts with Circesteem, when they were children. 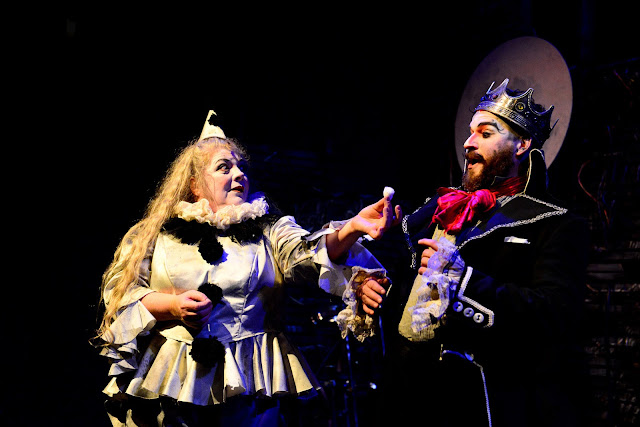 (left to right) Pam Chermansky and Anthony Courser in The Ruffians’ 2014-15 production of BURNING BLUEBEARD. 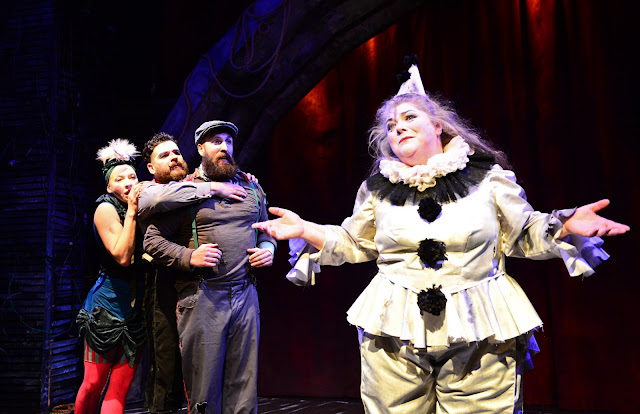 Although this ghost story is macabre, and sadly all too true, The Ruffians' production is a poignant and powerful celebration of life. I can't see a show in what is now the Nederlander Theatre (formerly The Oriental and before that, the doomed Iroquois) without echos of Burning Bluebeard in my mind. I see the tragic series of events that led to a fireball and the deaths of 600 theatergoers, mostly women and children. Leave the ghost lights on. The stories and memories of a scrappy band of actors and their actions that day have been given new life, in this darkly compelling tribute to love, loss, and heroism. Burning Bluebeard has become a beloved annual tradition for our family, and we can't wait to embrace this heart wrenching moment in time once again, and remember the stories that seep into spaces and stay. 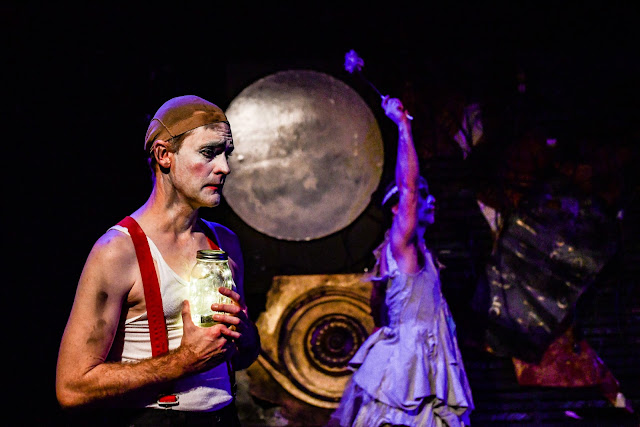 (left to right) Ryan Walters and Crosby Sandoval in The Neo-Futurists and The Ruffians’ 2018 production of BURNING BLUEBEARD.

Burning Bluebeard, created and performed by the critically acclaimed theatre troupe The Ruffians, has been touted as “a show you won’t quickly forget and that you could only see in Chicago” by the Chicago Tribune and New City says the production is “filled to the brim with irreverent humor, riveting dance sequences and enough charm to fill a bucket…” Told with music, clowning, tumbling, acrobatics and dance, Burning Bluebeard is a physical-performance phenomena inspired by the true story of Chicago’s former Iroquois Theatre and the unforgettable events that resulted in tragedy for 600 theatergoers at Christmas time in 1903.

A Chicago holiday tradition for many since its debut in 2011, each performance is a vaudevillian musical delight with a story that excavates the poetic and poignant remains of a piece of our city’s rich history and leaves the audience with an unforgettable experience. 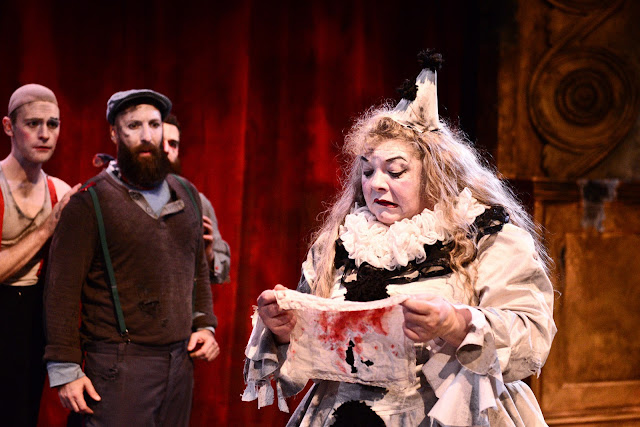 (left to right) Ryan Walters, Jay Torrence and Pam Chermansky in The Ruffians’ 2014-15 production of BURNING BLUEBEARD. presented by The Hypocrites. 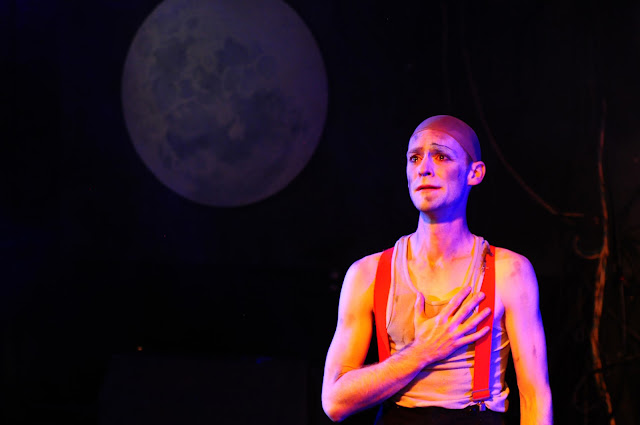 (pictured) Ryan Walters in The Neo-Futurists’ 2011 production of BURNING BLUEBEARD. 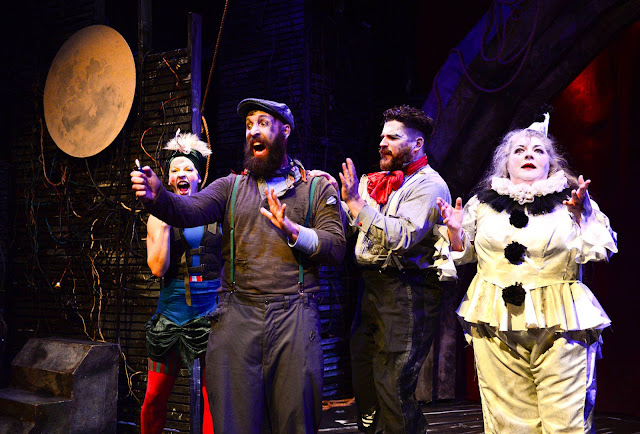 ABOUT JAY TORRENCE, Playwright and “Robert Murray”
Jay Torrence is a Ruffian and the playwright who created Burning Bluebeard, Roustabout! The Great Circus Trainwreck and Ivywild. As a former Neo-Futurist artistic director and ensemble member, Torrence worked over a decade writing, directing and performing hundreds of short plays that debuted in Chicago and toured throughout the nation. Other theater credits include: 500 Clown, Theater Oobleck, Akvavit Theatre, The Actor’s Gymnasium, Theater on the Lake, The Hypocrites, Redmoon Theater, Woolly Mammoth, Geva, Shakespeare Theatre Company (DC), The New Victory Theater (NY), The Actors Theatre of Louisville and Edmonton Actors Theatre. Internationally, this is the 13th production of Burning Bluebeard.

ABOUT HALENA KAYS, Director
Halena Kays is a theater director, deviser and performer. She most recently served as the artistic director of The Hypocrites, where she both performed and directed. She is the co-founder and former artistic director of Barrel of Monkeys, where she created and directed the majority of their public performances. She is a founding member of the artistic collaborative, The Ruffians, and directs their recurring hit production of Burning Bluebeard, as well as their other experiments in live performance events. She is a UT-Austin and Northwestern graduate, former member of the Big Apple Circus Clown Care unit, past co-artistic curator for Theater on the Lake and assistant professor at Northwestern University.

Kays is an artistic associate with the Neo-Futurists where she directed Pop/Waits, 44 Plays for 44 Presidents, Burning Bluebeard, co-created and directed Daredevils and Daredevils Hamlet and the sight specific extravaganza, Fake Lake. Some interesting Chicago directing credits include: Endgame, Ivywild, Six Characters in Search of an Author at The Hypocrites; The Magic Play at The Goodman, Lord of the Flies at Steppenwolf; On Clover Road at American Blues Theater; Feast (part of a collaborative directing effort) with The Albany Park Theatre Project at The Goodman. Regionally, Halena has directed The Magic Play at The Olney Theater Center, The Actor’s Theater of Louisville, Portland Center Stage and Syracuse Stage, Love Song with The Nashville Story Garden and Secretary for Nashville Rep’s Ingram New Works Festival.

Kays has been nominated for a Jefferson Citation for Best Supporting Actress and Best Direction, named one of the top 50 “players” in Chicago theater by NewCity, is a recipient of the prestigious 3Arts award and received a signed letter from Mr. Rogers saying she was “special” in 1978. She is a proud member of the Stage Directors and Choreography Society. 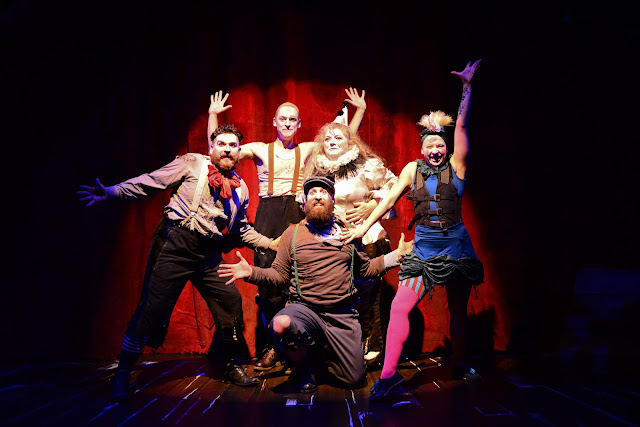 ABOUT 2019 YEAR OF CHICAGO THEATRE
Porchlight Music Theatre is proud to be part of the 2019 Year of Chicago Theatre, presented by the City of Chicago and the League of Chicago Theatres. To truly fall in love with Chicago, you must go to our theatres. This is where the city bares its fearless soul. Home to a community of creators, risk-takers and big hearts, Chicago theatre is a hotbed for exciting new work and hundreds of world premieres every year. From Broadway musicals to storefront plays and improv, there’s always a seat waiting for you at one of our 200+ theatres.

ABOUT THE RUFFIANS
The Ruffians are an artistic collective of theater makers (clowns, daredevils, acrobats, dancers, writers, performers, designers, directors). The Ruffians have all honed their craft working over a decade in Chicago’s various and thriving experimental, clown and storefront theater communities. A Ruffians objective is to make beautiful things with rough edges. A Ruffians motto: Breathe. Dare. Live.

ABOUT PORCHLIGHT MUSIC THEATRE
As the home for music theatre in Chicago now in its 25th season, Porchlight Music Theatre is nationally recognized for reimagining classic productions, developing new works and showcasing musical theatre’s noted Chicago veterans and rising stars. Porchlight elevates the genre by providing intimate and powerful theatrical experiences of music theatre through the lens of the “Chicago Style.” The 2017–2018 year marked a milestone for Porchlight as the company became an Artist In-Residence at the historic Ruth Page Center for the Arts in Chicago’s Gold Coast. Porchlight’s rich history includes the staging of more than 70 productions with 15 Chicago premieres and five world premieres. Through Porchlight’s “Off the Porch” new works program, the musicals of the next generation are developed and given a first audience. The School at Porchlight is Chicago’s center for music theatre training in the areas of performance, writing and appreciation including the launch of a youth summer “Make Your Own Musical” Camp in 2017. The company’s many accolades include 28 Black Theatre Alliance nominations and 12 awards, as well as a total of 150 Joseph Jefferson Award nominations resulting in 42 Jeff Awards including five consecutive Best Production awards for The Scottsboro Boys (2017), Dreamgirls (2016), Sondheim on Sondheim (2015), Ain’t Misbehavin’ (2014) and A Class Act (2013).

The 2019 – 2020 25th Anniversary Season is dedicated to the memory of long-time Board Member George K. “Kim” Sargent. 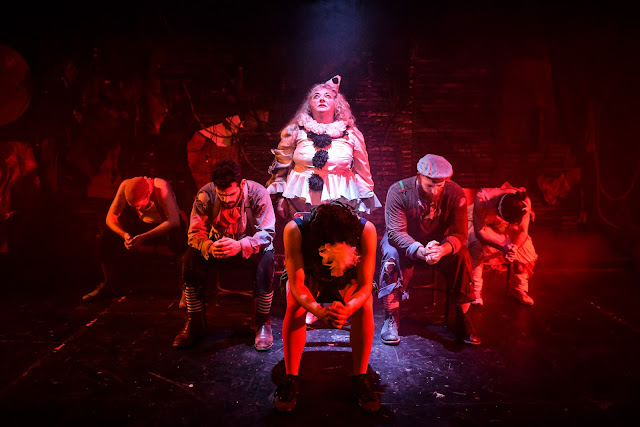 (center) Pamela Chermansky with the cast of The Neo-Futurists and The Ruffians’ 2018 production of BURNING BLUEBEARD.
Posted by Bonnie Kenaz-Mara at 9:46 AM