BABES WITH BLADES THEATRE COMPANY
ANNOUNCES
CAST AND CREATIVE TEAM FOR THE WORLD PREMIERE OF
THE INVISIBLE SCARLET O’NEIL
AT THE FACTORY THEATER,
9/2 – 10/14 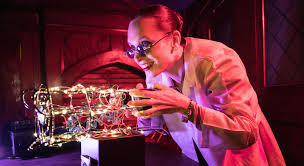 Based on the 1940s Russell Stamm Comic Strip, Barbara Lhota’s New Play, Directed by Leigh Barrett, Places The Beloved Superhero in Dire Straits as She Battles to Save Science, Chicago and Maybe the World

Babes With Blades Theatre Company (BWBTC) has been a favorite of mine for decades, and now that my own daughter is a teen, she's a frequent fan as well. I'm thrilled that she has such excellent role models of fierce, funny, fabulous women. We can't wait to catch Babes With Blades' next world premiere, The Invisible Scarlet O’Neil! 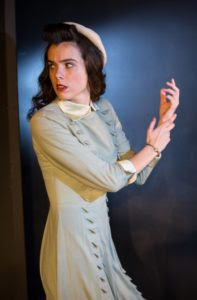 A mishap in her father’s lab gave Scarlet O’Neil (Chloe Baldwin) the power of invisibility – a power she promised Dr. O’Neil she’d never use…but Daddy never knew there’d be days like these.

It’s the 1940s, and the late Dr. O’Neil’s former lab assistant Evanna Keil (Elizabeth MacDougald) is desperate to perfect her mind-controlling Ruby Red Lipstick before selling it to the KGB. The ensuing mayhem threatens everything Dr. O’Neil has worked for, and everything his daughter, Scarlet, holds dear. Can Scarlet save her deceased father’s reputation, his scientific collaborators, and their military secrets while also rescuing her kidnapped landlady, a young prodigy, a small dog, the gals at the City News and all of Chicago – if not the world? It’s The Invisible Scarlet O’Neil to the rescue.

Babes With Blades Theatre Company is no stranger to the 1940s, having previously produced several shows set in and around that decade, such as Barbara Lhota’s 180 Degree Rule (with M.E.H. Lewis) and The Double. “It's one of my favorite time periods for comedy and action, and we have both! The style has such a great physicality, and the language just crackles,” said Director Leigh Barrett. “Plus Barb has taken this superheroine, who originated in 1940, and set her story right after World War II. This of course is when women who had been working in factories and offices – making a difference, having an impact – were expected to step down upon the soldiers' return from the war.” Playwright Lhota added, “Women who were made visible during World War II, because they took over so many male dominated jobs, were now asked to become, in effect, invisible as the men came home.”

It’s not only the time or the politics, though – the creative team is smitten with Scarlet herself. “I love Scarlet’s origin story because she accidentally acquires her power at a young age and realizes, as many superheroes do, that this gift requires her to be her best and bravest self,” said Lhota. Barrett agreed, “She has this power of invisibility, but she's not invulnerable. She just happens to be brave enough to risk her own safety by jumping into a raging river or on top of a moving car when she sees someone who needs help.” Violence Designer Libby Beyreis added, “I've always been drawn to superhero stories because I think that kind of story, of standing up for things you believe in, is one of the most powerful and important stories you can tell.” Lhota concluded, “I feel like we could really use a hero like Scarlet fighting for the defenseless today, a hero who is optimistic and has a giant heart.”

ABOUT RUSSELL STAMM’S ORIGINAL COMIC STRIP
Widely recognized as America’s first female superhero comic strip, Russell Stamm’s “Invisible Scarlet O’Neil” ran in the Chicago Times from 1940-56 to great acclaim.  Within months of her first appearance, Scarlet could be found in the Sunday strips as well; “Famous Funnies” also produced monthly comic books reprinting her adventures.  By the mid-1940s, she was in more than 100 newspapers worldwide.

Scarlet’s superpower – invisibility – dropped her into the middle of extraordinary circumstances, but her focus was always her fellow human beings. As stated in The Untold Origins of Invisible Scarlet O’Neil, “Scarlet was not a wealthy adventurer, an expert acrobat, a skilled fighter, a sensual seductress, a sharp-witted detective, nor an avenger of the death of a loved one. Scarlet simply used her powers to help people.”

ABOUT RUSSELL STAMM, CREATOR OF INVISIBLE SCARLET O’NEIL
The creator of "Invisible Scarlet O'Neil,” Russell Arthur Stamm, was born on April 16, 1915 in Chicago, the youngest of five brothers and two sisters. After graduating from Crane Technical High School in 1933, through a series of fortuitous introductions, Stamm came to the attention of Chester Gould, an American cartoonist best known for the "Dick Tracy" comic strip. He assisted Gould on "Dick Tracy" from 1935-40, during which time he also met and married his wife, Marjorie. In 1940, Stamm created the groundbreaking heroine, Scarlet O'Neil, an investigative reporter who used her ability to make herself invisible to solve crimes.

His son, Russell A. Stamm, remembered his father’s creative process: "Since my father worked from our home most of the time, I have vivid memories of growing up by his side as he worked away at his drawing board creating Scarlet and her cohort of characters. There were numerous times when he would ask me to model a position or stance so he could better visualize perspectives for his creative art. When a strip would appear with a picture of a character's foot that I had modeled for I would proudly tell everyone I met that it was my foot in the newspaper."

ABOUT BARBARA LHOTA, PLAYWRIGHT
Barbara Lhota is an award-winning playwright, a member of the Dramatists Guild, a network playwright with Pride Films and Plays, and a member of Babes With Blades Theatre Company.

Her plays have been produced in Boston, Chicago, New York and throughout the country.  Her most recent productions and readings have been with Organic Theater, Raven Theatre, 20% Theater, Pride Films and Plays, Polarity Theatre, Idle Muse, Something Marvelous, and Stage Left.

Lhota has four volumes of short plays published with Smith & Kraus and 50 monologues published with Meriwether, Pioneer Press, Smith & Kraus and Performance Stuff. She has premiered three other scripts with BWBTC: Los Desaparecidos (The Vanished) in 2008, The Double in 2011 and 180 Degree Rule (with M.E.H. Lewis) in 2016.  She is a past recipient of the Mimi and Harold Steinberg Award for Playwriting for Hanging by a Thread and was a semi-finalist for the Shakespeare’s Sister Fellowship.

ABOUT LEIGH BARRETT, DIRECTOR
A former artistic director of Babes With Blades Theatre Company, Leigh Barrett now serves as technical coordinator and casting director. She has been making theatre in Chicago as a Jill-of-all-trades since her graduation from Bradley University in 1989. In 1990, she joined Stage Left Theatre (representative lighting design work Leander Stillwell, The Waiting Room, Clue in the Old Birdbath, Burying the Bones, Police Deaf Near Far). She has been a member of BWBTC since designing The Girl in the Iron Mask in 2007. Her directing work includes Bo Thomas and the Case of the Sky Pirates, Patchwork Drifter and The Double (also by Barbara Lhota). The Invisible Scarlet O'Neil marks her third trip into the 1940s for BWBTC.

ABOUT LIBBY BEYREIS, VIOLENCE DESIGNER
Libby Beyreis has been fighting on stage and in film since 1994, and has been a proud company member of Babes With Blades Theatre Company since 2002. In addition to the Babes, she has designed violence for companies around Chicago including Idle Muse, Strangeloop, The DIVISION, Prop, Focal Point Theater Company, Chase Park and Free Street.

In each element of their programming, they embrace two key concepts:
Women are central to the story, driving the action rather than responding or submitting to it. Women are capable of a full emotional and physical range, up to and including violence and its consequences.

The company offers participants and patrons alike an unparalleled opportunity to experience women as heroes and villains; rescuers and rescuees; right, wrong, and everywhere in between: exciting, vivid, dynamic PEOPLE. It’s as simple and as subversive as that. 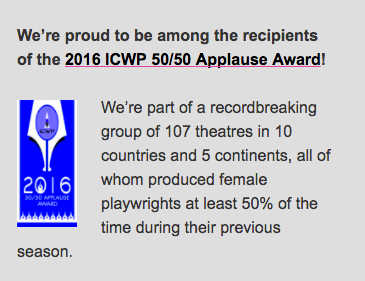 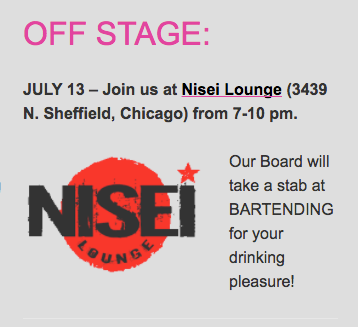 BWBTC’s 2017-18 programming is partially made possible by the kind support of The Gaylord & Dorothy Donnelley Foundation, The Paul M. Angell Family Foundation, The Illinois Arts Council Agency, and a CityArts Grant from the City of Chicago Department of Cultural Affairs & Special Events.